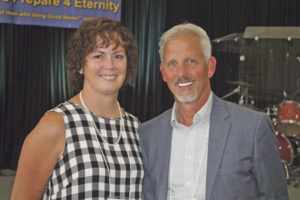 “We are living proof of the grace of God,” Greg Porter told a gathering of Fellowship of Christian Farmers International (FCFI) members during their 28th annual conference July 23 – 25 in Stittville, NY. Porter related his recovery from a near fatal farm accident which occurred eight years ago at his dairy farm in Adams Center, Jefferson County.

“Certainly, there is a time of your life that you will always know where you were when something happened forevermore,” he continued. “July 30, 2013 was one of those days.” It took Porter over 18 months to recover from injuries sustained in a farm accident that involved getting run over by a farm truck. He said he was in the feed alley of his 1969 heifer barn in the process of planning how to move bred heifers around when the accident happened. He was reading a notepad with several lists. “I was so focused on the lists and all I saw was the little trailer coming towards me.

“This all happens in two seconds,” he told the audience of fellow farmers. Porter was hit by the rear of the trailer and his body ended up underneath it. He was pinned under the trailer as the truck continued to the end of the barn. “A two-by-four sitting on edge would not have fit between me and the barn floor,” Porter explained. The driver of the truck was unaware that he had hit him.

“I heard the guys get out of the pick-up truck,” he continued. It was when Porter screamed for help that the workers became aware of the accident.

The Porters own and operate Porterdale Farms along with cousin, Steve. Greg’s father Dave Porter is still in the picture but leaves everyday operations to the younger folks.

It was not until after the responding ambulance arrived at the scene and began removing him from under the vehicle that Porter first felt pain. The emergency cut his pants – and “at this point, it had not hurt yet, but it was excruciating pain,” he said.

Porter would spend six weeks in the Level 1 Trauma Center in Syracuse with a crushed pelvis, 16 broken ribs, a dislocated right hip and a collapsed lung.

After arriving at the hospital, Porter spent three days in and out of consciousness. On day four, the medical team tried to repair the hip. His wife Lisa was sent home to sleep. She had been at his side for exhausting days on end. The doctors wanted a better look at the hip. He was transported by gurney for scans, and Porter said the pain of getting moved from the bed to the cold, flat surface of the scanning machine was extremely painful.

“All of a sudden there was no pain,” Porter said. Someone named Simeon was at his side to help. “I was thinking ‘Simeon is not a common name.’” Who was Simeon? “They said there is no Simeon who works in the basement,” Porter explained.

Greg and Lisa have much praise for the care received at the trauma center. “They love their farmers in this hospital because farmers don’t complain and follow the rules,” Porter said. However, when a therapist asked him if a ramp could be built at his home, he responded that he’d be walking by then.

“August 23rd became a more special day for me,” Porter said. That day was his and Sarah’s 26th wedding anniversary. It was also the day that he was scheduled to try to stand up for the first time since the accident a month earlier. “I probably only stood and walked for six or eight inches, but it was a big leap toward my recovery.

“The outpouring of love and support we received while at the hospital was so overwhelming,” Porter said. He came home from the hospital on Sept. 9. Their family doctor made a house call that week. They also went to church that first week. “Community holds a different meaning today, although they were always special.”

His story jumped forward several months to February 2014, when his daughter Casey wanted her dad to walk her down the aisle at the New York State Dairy Princess Pageant. Casey ended up being crowned state Dairy Princess that year.

Porter later went through weeks of pain from complications from hip surgery and had to get a hip replacement at about the first anniversary of the accident. “Today, I am reminded of the accident every day. I am blessed I did not get addicted to the painkillers. There were a lot of prayers that went out worldwide,” he said.

“This ordeal was an out-of-body experience for me that lasted over a year,” Lisa said. “Greg is a very quiet person unless he’s talking about farming or hunting.” However, Lisa added, “he started ministering to everyone around him [following the accident]. He talked about the miracles he had to survive.”

Lisa also praised the community response following the accident. She said community support was shown by employees, farmers and ag businesses, brothers and sister in Christ, family and neighbors. “Christian farmers responded from across the street and across the globe.”