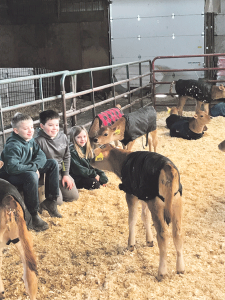 The original version of Dutch Hollow Farm was much like other New York dairy farms, with 55 cows and one family to support. Since then, the Schodack Landing farm has undergone numerous changes, but the Chittenden family’s commitment to maintaining an excellent purebred herd has not.

“My grandfather bought his first Jersey in 1926,” said Nate Chittenden, one of three siblings operating the farm today. “At one point during the ‘60s, he had one of the largest farms – with Jersey cows – in New York state.” Nate’s father Paul grew up with Jerseys, and the herd grew with Paul’s 4-H animals.

Nate said his father, grandfather and brother Alan are Master Jersey Breeders, and have judged cattle shows across the nation. “My father was president of the American Jersey Cattle Association, as was my grandfather before him,” said Nate. “And now my brother Alan is the first, third-generation director.”

The original farm included a freestall barn and a small parlor. “We grew internally,” said Nate. “We had registered Jerseys and sometimes bought quality animals when we could, but most growth was internal.”

When Nate was about 12 or 13, his two brothers were in college and planned to return to the farm. “We weren’t going to be a one-household farm anymore,” he said. “We had to expand to accommodate them and their families.”

Nate recalled that when he was in high school, he didn’t think he wanted to return to the farm. “We were right in the middle of that first expansion, and it was tough,” he said. “We had chores every day, but we never thought of not wanting to do them because we knew our responsibility was caring for the animals.”

As the family grew and Nate’s siblings Alan and Brian returned to the farm, so did the need to grow the farm. “We either had to diversify and create a different income stream,” said Nate, “or the farm would have to be large enough to handle more family.”

The major expansion in 1994 included moving the base farm about 100 yards to create more distance from a stream. “We were milking 300 cows by 1996,” said Nate. “In 2001 we built a hospital barn to accommodate the older, high-genetic value cows on the farm.”

Although Nate started at Cornell University as a biology major with plans to continue in pre-med, he realized as a sophomore that he was burning out. “I was running into guys in the agricultural fraternities who were dairy science,” he said, “and realized how comfortable I was with them. I switched from biology to animal science between my sophomore and junior years.”

The milking facilities at Dutch Hollow have evolved over time. The original milking facility on the farm was a double 3 side-opener parlor with grain feeders. The next was a double 6 side-opener, which was eventually converted to a double 15 herringbone. Cows are milked three times a day, and are monitored through the AfiMilk® system for activity, production and conductivity.

“When I came home from college and we were trying to get a handle on that huge expansion from 150 cows to 300 cows, I started doing the calf work,” said Nate. “I’m also managing the people, which isn’t something we ever thought we’d have to be good at when we were growing up.”

Nate noted that Jerseys mature faster than Holsteins, with age at first calving around 21 months. Mating decisions are made by Alan, and Brian is responsible for equipment and crops. Nate’s mom Melanie keeps the books and his dad Paul continues to fill in where he’s needed.

Dutch Hollow Farm is just several hours away from several metropolitan areas, including Syracuse, New York City and Boston. It’s also one mile from the Hudson River, surrounded by suburban communities, so environmental stewardship is a priority. Stalls are bedded with sawdust, and a lagoon stores manure for either injection or incorporation according to season and conditions. “With our nutrient management plan, we identify which fields we can spread on,” said Nate. “When possible, we plant cover crops including wheat and oats and use the straw for bedded packs for dry cows and heifers.”

Nate said when he was growing up on the farm, there were no family vacations. Today, with multiple households and well-trained, reliable employees who are good at what they do, getting away is a lot easier.

Nate’s niece Emily graduated from Cornell in 2017, and is on the farm full time. She coordinates school tours, publishes a quarterly public newsletter and handles the farm’s Facebook page. “She has put a lot of energy and structure into it,” said Nate, adding that he handled tours prior to Emily’s return to the farm. “There’s no one in our family who doesn’t enjoy sharing our farm with the public.”

While the time spent on social media doesn’t generate income, Nate considers the platform a responsibility. “The people I’ve met and the interactions we’ve had have meant a lot more to our farm’s image than anyone could have realized,” he said. “We have a very good reputation in our local community – we’ve always had that – and outside our immediate community, we try to represent not just our own farm, but all dairy farms.”

Dutch Hollow welcomes elementary school tours, with up to 1,000 young visitors annually. “We ask them to bring as many chaperones as they want,” said Nate. “Kids love the farm – they don’t need to be convinced – it’s the parents who see things on the internet or are conflicted about health. Nothing they see on the internet is going to be stronger than what they see with their own eyes.” Every other year, the family hosts a one-day open house through their milk co-op.

Nate said their town has a right-to-farm law, but he doesn’t view that as a blank check to do whatever they want. Instead, the family works with the community as much as possible to maintain good relationships. Nate said, “It’s a lot easier when things get tough to have the community supporting us than having the community waiting for us to fail.”