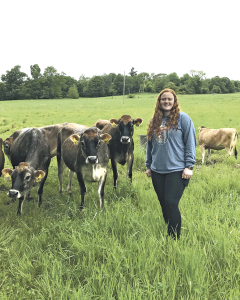 Like many New England dairy farms, Taft’s Milk and Maple Farm is home to several generations. Members of the fourth generation are currently managing the dairy herd, and the fifth generation is starting to help.

“My grandfather milked about 10 cows by hand,” said fourth generation farmer Tim Taft, explaining the history of the Huntington, VT, farm. “He’d pasture cows all over town. I never realized he took milk pails out and tied the cows to a tree and milked them there.”

Since then, the farm has undergone significant changes, one of which began when Tim returned from college with a degree in dairy farm management. The family wanted to increase the herd size, and Tim said they spent 10 years working on a plan. “It turned into building a new facility,” he said. “In 2002, we built a new freestall barn for 250 cows and went from round bales to chopping feed. We also added a new manure system and a new parlor.”

Purebred Jerseys have always been the Tafts’ breed of choice. Because the family had worked carefully to improve genetics for the herd they wanted, herd growth has been exclusively internal. “We had had a closed herd for quite a while, and we didn’t want to bring in disease,” said Tim. “We rarely have hairy warts or footrot, and we don’t use a footbath.” Tim said he’s careful about sanitation when shipping animals and follows strict biosecurity measures throughout the farm.

When the new facility was finished, the herd included 130 animals – a combination of cows and retained heifers. “For the first 10 years after I got out of school, I wanted the biggest and highest milk production cows I could make,” said Tim, adding that the herd is on DHIA. “As milk pricing changed to component pricing, we’ve been breeding to bulls that are plus for percent fat and protein. I look at udder composite, and I want long-lasting, strong cows that will be here for a while.” He added that the herd includes several cow families and some older cows that have been there for a while. “My top cow in the barn right now is eight years old,” he said. “She has a beautiful udder, and she’s averaging 111 pounds.”

The main farm includes 700 acres, much of which is wooded, leaving about 100 tillable acres for crops. The Tafts rent an additional 200 acres from area landowners. Crops include 150 acres of corn and 270 acres of mixed grass for the haylage component of a TMR. Tim’s father Bruce helps with field work, and Tim’s 14-year-old son Kyle is starting to do more on the farm. Niece Marah Deckers also spends time on the farm to help where she’s needed.

Prior to the facility improvement, heifers were raised on pasture, but Tim said they didn’t grow at the rate necessary for minimal age at first breeding. “We used to calve at 30 months,” he said. “Our first calf heifers were big and made a lot of milk right off the bat, but it’s expensive to raise them an extra six months without them producing milk. We’ve made changes, and now they’re calving at about 25 months.”

Newborn calves thrive under the care of Tim’s wife Margaret, whose meticulous attention has resulted in less than 1% calf mortality. Calves receive colostrum and fresh milk for the first six feedings, then at about 10 days, calves are moved to small group pens on another of Taft’s farms. At this point, Tim’s mother Mary takes over calf care. “It’s a tie-stall barn renovated to a calf barn with 10 group pens,” said Tim. “We mix acidified milk replacer twice a day, and milk is available all day to the six calves in each pen.”

Cows are milked in a DeLaval double-10 parallel parlor. Prior to receiving a production reduction notice from their co-op in March, the Tafts were milking 252 cows. “We’re milking 228 now,” said Tim. “For May, we were supposed to drop 15% from what we made in March.”

To reduce production, Tim took a critical look at the cull list. “We can break even, without components, to about 30 pounds of milk,” he said. “If a cow was on the cull list and dropped below 30, we sold her for beef. Now that number is 42 pounds. It’s hard to reduce by 15% by getting rid of the lowest producers. I sold 27 cows but didn’t get the production drop I was supposed to have.”

Another measure that helped reduce production was increasing the dry period from 50 days to 80 days. “The problem with this plan is we didn’t know ahead of time that we had to reduce production,” said Tim. “For May and June, I had 26 new heifers to calve, and they’re adding milk as I’m trying to take milk out.” With only 15 days’ notice to drop production, it was challenging to come up with a viable plan, and the required drop happened when milk prices were already low.

At this point, there’s no plan to return to normal production. “We don’t know when we can increase production or if they’re going to say ‘Decrease another 5%,’” said Tim. “We don’t know if this is a three-month plan or a 12-month plan. They’re watching the market.” Tim noted that making changes in the feeding program can also contribute to reduced production, but it’s tough to plan for the future. “If you drop cows’ nutrition so they make less milk, you can’t turn a switch back on in three months,” he said. “I think all farmers are trying to not hurt the highest producers because we need those cows to make the rest of the lactation.”

In addition to the dairy, Taft’s Milk and Maple Farm has a maple sugaring enterprise. “We’ve grown slowly,” said Tim. “Each year, we’ll thin some woods and put up tubing and add taps. We boil sap from 8,500 taps now, and add about 300 to 400 taps a year.”

About one-third of the maple syrup produced is sold retail; the rest is sold in bulk barrels. “That market, because of COVID-19, is up in the air because we sell to a restaurant supplier,” said Tim.