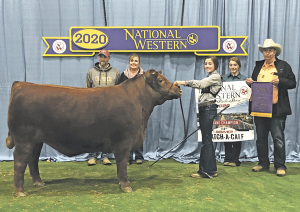 DENVER – It was a great day on the hill here for Sheridan Chaney and her Red Angus steer Milo at the National Western Stock Show (NWSS). The Elwood, NE, 16-year-old’s dream came true Jan. 12 when she was named the NWSS Catch-a-Calf (CAC) Grand Champion. Chaney is formerly of Thurmont, MD.

“When they announced my name as Grand Champion CAC I was absolutely speechless,” Sheridan said. “Words can’t even begin to describe how relieved I was. In that moment I knew that all my hard work had paid off.”

The CAC program is the longest consecutively running youth development program at NWSS. It started in 1935 when 10 boys caught 10 sponsored calves. The program quickly caught on and grew to 52 calves by 1942. Soon after World War II, the program settled at 40 calves per year, which is where it continues today.

Sheridan’s CAC journey began in January 2019, when she, along with 39 other enthusiastic 4-H youth from Nebraska, Wyoming, Colorado and Kansas, caught calves during four different NWSS rodeos. Once the kids catch a calf, they are considered CAC winners and return to Denver in May to pick up their project calf to raise for 8.5 months.

In addition to hundreds of hours worked with Milo, Sheridan thanked family, friends and mentors for her success. “I think my dedication, CAC friends and family definitely helped me be successful in this program,” she said. “I always pushed myself to do my best.”

Sheridan really enjoyed all aspects of the CAC program. “I had the opportunity to make connections with people who share the same passion for the beef industry as I do,” she explained. “I have made some great friends through this program which I will continue to stay in touch with. The most challenging was the record keeping. I definitely struggled with the numbers aspect of this program, but I absolutely benefited from it.”

Nebraska’s weather was a challenge for Sheridan during the program. “My sister and I got creative and started walking them inside a shed,” she said. “Then, my dad surprised my sister, Rianna, and I with an indoor wash rack at Christmas. Our steers really liked it.”

The high school sophomore said she really made a connection with her steer. “Milo has been the best show steer I’ve ever owned,” she said. “I bonded with him so well over the course of this project, which has made us work really well together. I spent every second I could with Milo so that we could be the best team that we could be. I wouldn’t have made it this far or been this successful without him and his gentle personality. It was very hard for me to let him go.”

It’s no doubt the CAC program had a profound effect on every participant but each youth not only gained knowledge and valuable life lessons, they also developed friendships and contacts. “This program has allowed me to network with people inside the beef industry,” Sheridan stated. “My relationship with these people could potentially serve me well in the future. The CAC program also further improved the extent of my knowledge on practical beef management. I can use the new information that I’ve acquired in my own beef projects.”

One of those connections was with her sponsor, John Brown of Oberlin, KS. He traveled to six of Sheridan’s cattle shows throughout the summer to support her efforts.

Winning the Grand Champion title is the biggest livestock win for Sheridan.

Sheridan is grateful for the CAC superintendents, Molly Waneka Keil and Amy Kelley, and NWSS CAC Coordinator Clancy Anderson, for all of their guidance and support.

Sheridan and Shane will be keeping 20% of their auction money; 30% is divided between all 38 other CAC participants; the remaining 50% goes back to the CAC program to support the program.

Forty new CAC participants caught calves the second weekend of NWSS. They will pick their steers up in May and have lots of fun and hard work to look forward to.