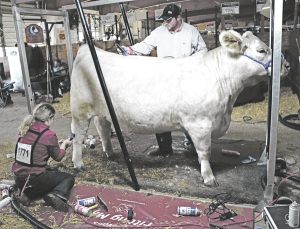 Tension was high but under control as the coats of show cows, steers and bulls were meticulously clipped, hooves were polished and brooms of tails were brushed out by their owners and assistants for the 2019 Hereford Show and the 2019 Jackpot Heifer Show.

These shows took place at the Eastern States Exposition (Big E) in West Springfield, MA, on a day that eclipsed all former attendance records with a historical high of 176,544 attendees. Subsequent traffic jams to and from the fairgrounds quite a delay for those eager to see the sights. During the two-week fair, a total of 1,629,527 people attended.

Fredrickson has been coming to the Big E for over a decade. She and her family raise 80 head on 108 acres. In the late afternoon, she and an assistant, Adam Pride from Limington, ME, were clipping the creamy beige coat of Top of the Hill’s EJF Selena, a Chianina/Angus cross, also known as a Chiangus, to enter as a contestant in the imminent Jackpot Heifer Show. Each swipe of Pride’s clippers met up with the former swipe so no lines showed at all – just a creamy fleece-like coat. While all the hubbub of the rest of the fair went on outside, it was quiet and peaceful inside the barn (except for the loud whir of the giant fans that cooled the cattle). All the effort was worth it, as EJF Selena placed first in the Jackpot Heifer born January to February 2018 class.