Celebrating a century – and cheese 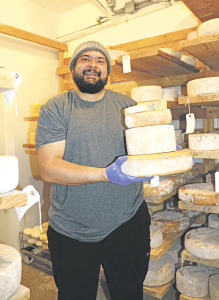 At the picturesque High Lawn Farm dairy in Lee, MA, the new year began by celebrating more than a century of the Wilde family’s ownership. Its founders were Col. H.G. and Marjorie Field Wilde, who took over the farm in 1920. Elizur Smith started the farm in the mid-1880s.

The first Jersey arrived at the farm in 1918. Their current full herd of Jerseys consists of 120 milking cows out of a herd of 250, overseen by herd manager Caitlin Moriarty. The cows have been milked at will by two robotic milking machines for the past five years, currently producing 6,700 to 7,000 pounds of milk daily. Their youngest calf was born on Dec. 20, ushering in 2020 with a total of 25 calves in the nursery.

Last February, cheese room manager Roberto Laurens Jr. and two others began making artisanal cheese at the farm, producing 800 pounds of cheese a week. “I’m hoping to quadruple that by the summer,” said Laurens Jr. He essentially grew up at the farm, since his father, general farm manager Roberto Laurens Sr., has managed High Lawn Farm for the Wilde family for 18 years.

Laurens Jr. studied with cheesemakers in Vermont, notably Peter Dixon of Peter Dixon Dairy Foods Consulting in Westminster VT, who also owns Parish Hill Creamery. High Lawn Farm currently sells four different cheeses, with two others in the aging room set for sale later in 2020, and another one in the works.

Their soft-ripened Comanche Queen is named after one of the farm’s original cows. They offer Taleggio Crema Alpina, a washed rind Tomme Wilde Field and a High Lawn Blue Cheese. The new cheeses aging in the cheese room are already named: High Lawn Cheddar and an Alpine-style Siegfried Pride, also named after the farm’s original stock. Upcoming is a Canestrato (which translates to basket) cheese.

“The soft-ripened Comanche Queen really features the sweet Jersey milk. When it’s young, it tastes like cream, so people who like a little more funk in their cheese wait a while for the cheese to take on mushroomy notes, like a Camembert,” Laurens Jr. said. In the first three to four weeks, Comanche Queen is pretty mild, starting to reveal its other flavors when aged a month to a month and a half.

Like the 40 gallons of maple sap required to make one gallon of maple syrup, cheeses require their own equations in amounts of milk needed to yield a given amount and type of cheese. For a soft-ripened cheese, the amount of milk reduces to yield 18%. With hard cheeses, the yield is 11% or 12% or lower. “Ten percent of the milk becomes the cheese. The harder the cheese, the lower the yield,” explained Laurens Jr., assisted in cheesemaking by Matt Schweizer and Gina Molinari.

“I think what is most special about what we do is less and less people are making food with their hands,” he said. “There are so few dairy farms in the Northeast. We were looking for ways to keep the farm surviving, and looked to making cheese. There are not that many people who know how to make cheese in an artisanal way. We’re not a factory; we’re literally three of us filling the vat by hand.”

The cheese room is intentionally warm and humid. “When we are making cheese, it should feel like summer. In Switzerland and other places in Europe, cheeses are traditionally started in late summer and early fall after the cows have calved and had a chance to eat the spring grass,” he said. They flip the cheese wheels in the aging room, and wash the rind cheeses every other day. 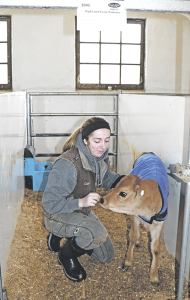 Following the lines of sustainability, their cheese production rooms are in revamped, revitalized barns. The cheesemaking and aging room historically was a blacksmith shop. “We’re hopefully building a new aging room, where the historical chicken coop used to be,” Laurens Jr. said.

“The farm is helping to maintain the flavor of the Northeast, and revive it as well. Though there are dairies, there are less and less farms out there. It’s nice to be part of that – keeping traditions alive, being able to maintain a lot of the green space,” he said.

High Lawn Farm employs 29 people. Two hundred of the farm’s 1,600 acres consist of the working farm, with fields to seasonally graze the cows and raise corn, alfalfa and hay for feed. There are four cow barns, including the nursery and new milking barn. “The Wilde family is committed to keeping green space,” said Laurens Jr. They also have a farm museum and invite tours.

Their cheesemaking facility sits next to the dairy production plant where they bottle their own milk. The bottling plant was completed in 2015. Jersey milk contains a high butterfat content, making it rich and creamy, perfect for cheesemakers.

Their cows sleep on waterbeds. One could say their contentment flows through their milk. The farm’s products have earned the Queen of Quality trademark, given since 2008 to products made with 100% Jersey milk.

High Lawn Farm supplies stores across the state and they have an online store. Upcoming plans include opening an onsite farm stand to satisfy customers’ repeated requests for a “brick-and-mortar” store.