Celebrating 25 years, from one goat lady to the next 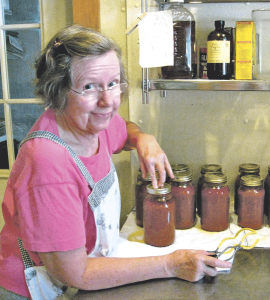 Goat Lady Dairy will be celebrating its 25th anniversary in 2020. But the farmland’s connection with the family of owner Carrie Routh Bradds goes back a bit further than that – roughly 200 years, in fact.

“My great-great-great-grandfather John Routh was a tobacco farmer, and he first lived in a log cabin on this property in 1816,” Carrie is proud to say. First erected in 1780, the same cabin still stands on the dairy’s 40 acres in Climax, NC.

Goat Lady was founded in 1995 by Virginia “Ginnie” Tate. A nurse by trade, Ginnie was raised on a farm in Illinois. Ginnie and her husband moved to North Carolina in 1984. Carrie and Ginnie have been friends for years, and Carrie has been with Goat Lady since Ginnie started the dairy.

Ginnie handed off the reins of the business to Carrie in 2017. Carrie remembers just how Ginnie let her and husband Bobby Bradds know they were retiring: “She and her husband told us ‘We’re going on vacation. When we get back we want you to be running the place like it’s yours, because it is!’”

What began as a hobby farm with a single pair of Nubian goats is now a full-fledged artisan cheese dairy, with five full-time and one part-time year-round employees. “We have great people working here,” Carrie explained. “We tend both goats and cows.”

Since taking charge at Goat Lady, Carrie has instituted some changes for the business. “At one point, we were participating in as many as 10 farmers markets. But we’ve moved away from that, though we still sell to the farmers markets wholesale. Our sales are now over 90% wholesale. While we do have some people buying cheese on-site, we mainly sell to a variety of distributors. Most of our products find their way to restaurants.”

Despite the success that Goat Lady has experienced since Carrie’s ownership began, the dairy has not proven immune to the current economic downturn.

“Our cheeses really are luxury cheeses,” said Carrie. “With so many restaurants doing far less business, our sales are really down. We’ve also had to suspend our farm-to-fork program.” In the past, Goat Lady saw weekly sales as high as $30,000. Carrie openly, and with obvious disappointment, reveals that the dairy recently had an $800 week. She estimated that revenues for the year are down between $40,000 and $50,000, but is quick to add, “We’ll be okay. We’re handling that.”

Impelled to look for alternative revenue streams, Goat Lady now engages in much more e-commerce. Originally very limited in scope, “our e-store has shifted gears and now offers our entire product line,” Carrie said. “We’ve already had over $4,000 in sales this year.”

Looking to expand its offerings, Carrie is hard at work on a few new surprises. She noted that a washed-rind newcomer will soon be available to hungry cheese fanciers.

Despite the challenging times, don’t count out the folks at Goat Lady. Carrie’s family was one of the very few to be recognized by the North Carolina Department of Agriculture & Consumer Services as a “Two-Century Farming Family,” and they don’t plan on going anywhere.

“I think it’s going to be a long time before people are comfortable being out again … But things will eventually go back to normal. And we’ll be here,” Carrie said.