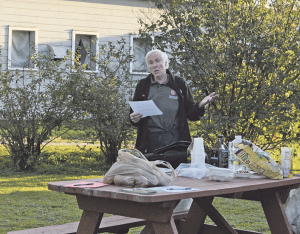 A little more than a decade ago, Tilldale Farms in Hoosick, NY transitioned from a dairy to a multi-species livestock farm. Dan and Joanne Tilley sell meat directly to consumers at farmer’s markets and retail shops. On Sept. 19, the couple hosted the final event in the summer long beef production series sponsored by the Capital Area Agriculture & Horticulture Program of the Cornell Cooperative Extension Albany County. The focus of the workshop was cultivating a successful freezer trade, which the Tilley’s have done for their Red Devon grass fed cow/calf herd, broiler chickens and pork.

“It’s important to think about certifications and to determine if it is worth the time and money to pursue them as it relates to your customers,” said Steve Hadcock, CCE Beginning Farmer and Market Development Educator. “A few examples that might make sense are the New York Grown and Certified, Certified Grass Fed and Certified Humane and Animal Welfare.”

In 1999, Tilldale Farm became certified organic so when they changed over to beef, the leg work was already done. They continued the record keeping to maintain the status and decided their operation would be grass fed on 100 acres of owned land and another 100 or rented pasture lands. They highlight both the grass fed and organic attributes to their customers.

“Customers want to be more engaged with how their food is being produced, including how the animals are treated,” Hadcock said. “You’re in the customer service business as much as farming and you have to share your story with your customers.”

Interacting with customers and marketing your farm will only get you so far. Creating a budget is essential for developing a sustainable business. A good budget includes hard numbers on what it costs to raise a steer to market weight. That information helps determine selling prices.

“You have to plan for profit,” Hadcock said. “Generating enough income to break even isn’t enough to sustain a farm or a family.”

An online tool called Meat Suite (meatsuite.com) helps producers determine prices based on the butcher’s cut sheet and the total income a farm needs to earn per pound. The calculator is also helpful in adjusting prices mid-year as inventory levels fluctuate.

“If you’re running long on some products and out of others, Meat Suite helps you decide if and by how much you can bump up prices on fast sellers and drop price on slower sellers to even out on total income on the entire steer,” he explained. 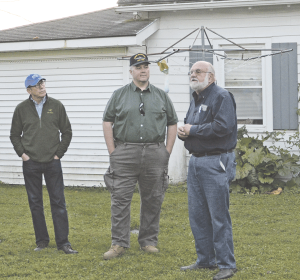 People don’t have the freezer space they used to and they’re not as familiar with cooking all cuts as previous generations. Finding ways to solve a customer’s problem and make it convenient to use locally raised meat increases sales long-term.

“We offer a meat CSA that includes beef and chicken. The beef averages out to about one-tenth of a cow,” Joanne said. “If a customer doesn’t have enough space, they can take half at a time and we’ll store the other half.”

Hadcock added that offering cooking tips and recipes may be one way to entice customers to try a different cut of meat. He’s also observed that vegetable CSAs are offering loyalty programs and suggests exploring the concept to determine if it could also work for meat sales.

Enticing shoppers to buy locally produced meat is only part of the equation for a successful freezer trade. The process begins with raising healthy animals and having biosecurity practices in place that prevent or limit the spread of infectious diseases.

“Get established with a veterinarian who is interested in cattle,” said Richard Ellis, DVM. The field veterinarian works for the New York State Cattle Health Assurance Program (NYSCHAP). “Get involved with NYSCHAP before you have a problem to develop a farm-specific herd health plan.”

Develop a biosecurity plan and require off-farm visitors to comply. Disposable foot coverings can ensure that pathogens coming in from one farm, don’t infect your farm. Dr. Ellis also recommends posting signs that ask visitors to leave a call back number or provide a method for getting in touch with you so that the guests are not wandering the farm.

“Johne’s disease used to only be in dairy cattle, but it’s starting to show up in beef too. It can pass between goats, sheep and cows,” he said. “It’s a disease that impacts the intentional tract and may not show up until years after the initial infection.”

Anaplasmosis is another disease that has become problematic. He noted that more cases are being reported in New York because of the number of shared needles and because it’s spread through insects, mainly mosquitos.

“There was a big outbreak at a Columbia County operation,” he said. “It’s treatable with tetracycline, but when you use that, if you have an organic certification it goes out the window.”

“Ask questions,” he said. “If you’re dealing with a good farmer they will tell you if they are a NYSCHAP farm. Doesn’t mean they do testing, but paying attention to it.”