Can’t have just a few 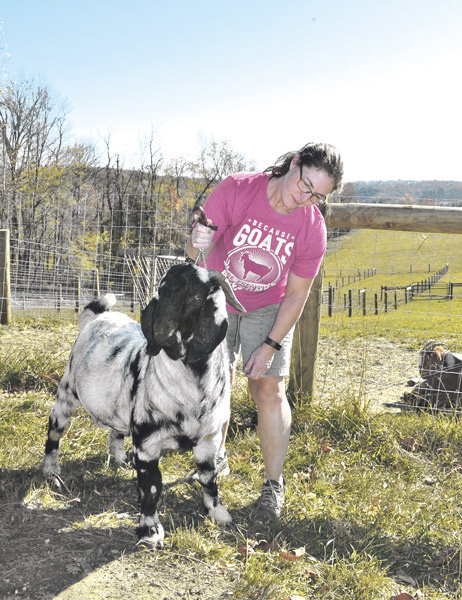 Many people who have goats start innocently enough with a few goats “just to have some animals.”

That’s how it began for Tracey and Mike LaRue, who purchased their first Boer goats in April 2018. “We started with four goats, just for fun,” said Tracey. “By the end of that summer, we had eight does.” Mike and Tracey also purchased a traditional Boer buck that throws color, and that buck has produced high-quality kids.

Those who haven’t owned livestock in the past quickly learn that goats aren’t quite as easy to raise as they thought. But Tracey was experienced with livestock, having competed in 4-H. Both of her parents were involved in the medical field, which Tracey said has helped tremendously (she was a pre-vet major at Penn State).

Drawing on her experience from the 4-H horse judging team, Tracey said, “Conformation is conformation. Once I knew what goats were supposed to look like, we started looking for more bone, size and mass. Now we look at bone, size, pedigrees and ennoblements. For ennoblement, a certain number of their progeny have to earn points. After they earn more points, they can earn Sire of Merit or Doe of Excellence.”

As they learned more about Boer goats, the couple realized the best way to add new genetics to the herd was to purchase high-quality bred does. Mike is always on the lookout for Boer sales, and the LaRues have purchased several goats through sales across the nation. They recently purchased junior herd sire “Oyhee Heartbreak King,” a black dapple buck from a Boer breeder in Oregon.

Purchasing outside goats involves quarantine at the farm. Tracey maintains a quarantine pen that allows segregated goats to see other animals without direct contact. “We quarantine for a minimum of two weeks to make sure they don’t have something they can give the others,” she said. “If they haven’t arrived here with a certificate that they’re negative for CAE, CL and Johne’s, we test for those diseases. As soon as the test results come back, we start to transition the quarantined goats to our general population.”

Timing is important in breeding any small ruminants due to the potential for higher income at certain times of the year. Since goats are an important food for many ethnic groups, Tracey keeps track of the ethnic holidays. The LaRues have bred does to kid at different times of the year, and concluded that mid-summer kiddings are less than desirable due to heat. “Last year, all of our kids were born between February and May,” said Tracey, “so we missed selling market kids for 4-H.” Right now, in addition to young stock, the LaRues have 20 bred does due to kid between now and March 2021.

To increase the genetic base in the herd without adding outside animals, the LaRues have done some laparoscopic AI. The LaRues work with another goat breeder who sets up an on-farm clinic where a veterinarian performs the procedure on properly prepared does. LAI allows semen deposition directly in the uterus and results in a relatively high conception rate. Tracey said they’d like to do more laparoscopic insemination because it seems to be more successful than traditional AI. One doe on the farm is a recipient carrying a kid with superior genetics, and Tracey is in the process of determining whether any does in the herd are worth flushing for embryos.

Like most people who start raising a species they aren’t familiar with, Tracey admitted to a definite learning curve with goats. Although she had years of experience with horses, she’s found that goats present some unique health challenges. While they’re diligent about culling problem animals, the LaRues, like anyone else who raises livestock, have dealt with multiples, rejected newborns and difficult births. Tracey considers each out-of-the-ordinary incident as a means to learn and improve what she’s doing.

Tracey often draws on her experience from pre-vet studies and translates her knowledge to goats. She does blood draws for pregnancy checks and uses FAMACHA scoring to determine whether animals require deworming. Since they now have a significant investment in high-quality purebred animals, the LaRues have insured some of the most valuable animals in the herd.

Although the LaRues haven’t shown extensively, Tracey said she learned a lot from the several competitions they’ve entered. “I’m starting to learn more about what we should keep and what we should send to market,” said Tracey. “I sold some breeding stock this year, and I watch the ethnic calendar so I know when to send them to market.”

Mike said one of the biggest issues for people who start raising goats comes from not having a clear goal – whether they want to raise traditional Boer goats or focus on color, genetics, 4-H or market animals. Mike would tell those just starting in the business to spend a given amount of money on four good goats instead of 12 average goats.

“My main goal is to be able to make something better than what we see at the sales,” said Mike. “I can have animals that are just as good right here – I don’t need to buy them.”

Tracey echoed Mike’s sentiments, adding, “We’re in it now. It isn’t just a fun hobby when there are 40 goats on the farm.”