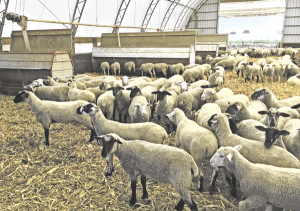 Those who raise sheep and sell lamb hope every customer will enjoy the unique, mild flavor of lamb. But when some consumers think of lamb, it isn’t always a pleasant association. Perhaps they had lamb that was overcooked, or smelled like a wet sweater in the oven. Many lamb consumers insist on having mint jelly with lamb, perhaps to disguise strong flavor or simply due to tradition.

Research shows that for those who haven’t tried lamb, the first taste is critical and determines whether that person will try it again. What if lamb flavor was more predictable? The 2015 National Lamb Quality Audit identified flavor as the most prominent factor in defining lamb quality, and when surveyed, 71% of lamb purchasers indicated they’d pay a premium for guaranteed eating satisfaction. With this in mind, the American Lamb Board (ALB) initiated a project to better understand the factors that affect lamb flavor.

Dr. Dale Woerner, Endowed Professor in Meat Science at Texas Tech University, has been studying lamb flavor with funding and guidance from the ALB. “It’s important to know how consumers define quality of lamb,” he said. “Most of the established research tells us that it’s the fat. Some may not agree with that, but the flavor profile, good or bad, comes from the fat from within the muscle or fat on the outside of the muscle.”

Some individuals are more sensitive to flavor compounds. “We also know that with lamb and other meat species, we develop a preference for flavor based on how we grew up,” said Woerner. “Those who grew up eating lamb several times a week probably have a stronger preference for lamb than those who haven’t eaten a lot of lamb over their lifetime.”

With the support of the ALB, a series of research projects have been aimed at determining how to ensure eating satisfaction with lamb. Karissa Maneotis, Industry Services at ALB, conducted studies with 75 lambs with 25 in each of three age categories: lamb (no permanent incisors, less than 12 to 14 months of age); yearlings (two permanent incisors); and mutton (mature with permanent teeth). The goal in grouping lambs was to ensure a diverse flavor profile.

“The objective was to get 75 sheep that had varying flavor performance,” said Woerner, adding that people often get caught up in categorizing lamb by age. “Then use an instrument to separate the performance of those 75 sheep. The instrument measured volatile organic compounds, AKA chemical fingerprints or VOC signatures, then related that information to the actual flavor.

“We segregated the flavor performance of lamb into three categories: strong, mild or somewhere in between,” said Woerner. “Mushroomy or buttery flavor is perceived as the most favorable flavor profile in meat. The flavor described as ‘cut grass’ is notable in grass-finished products, but also in products that are stored too long or oxidized.”

The process to determine flavor signature was successfully, but was time-consuming and would not work on a large scale in a plant. Woerner eventually found a piece of equipment, originally designed for the medical industry, that would speed up the process. “The Rapid Evaporative Ionization Mass Spectrometer (REIMS) is a surgical tool, a cauterizing tool,” he said. “It could remove a piece of diseased tissue and leave the rest of the organ.”

Although the technology was sound, the machine has a two-second lag time, making it impractical for a surgical setting. However, Woerner said there’s potential for the technology to differentiate lamb flavor in slaughter plants. “The instrument measures everything that’s present relative to the chemical profile and compares it to a flavor ‘fingerprint,’” he said. “But the instrument is large and costly. It uses just some of its capability at the slaughter plant level.”

Cody Gifford, PhD candidate working with Woerner, continued the flavor study. He doubled the sample size and collected lambs in the same age groups. The intention was to determine potential variations resulting from grain finishing, grass finishing, breed differences, sexes and ages. Samples were collected with the REIMS instrument to capture the flavor profile, and that information was combined with the impressions of trained sensory testers.

“Within the lamb category, all the animals that were collected for that age category had zero permanent incisors, but there was variation within that,” said Gifford. “We had five- and six-month-old lambs all the way to almost yearling age. There were similar variations with the yearling and mutton categories.”

Gifford tracked carcasses as they were selected at the plant and collected information including breed, sex and backgrounding. Samples were preserved in dry ice and vacuum-sealed to limit oxidation. Next, REIMS was used on the external leg surface and on the lean portion of the leg. Meat from the leg was ground and analyzed by REIMS, resulting in three tissue type samples from the same leg.

“The ground meat was sampled by trained sensory panels,” said Gifford. “Because fat is a big contributor to flavor profile, we intentionally trimmed excess external fat. The majority of fat in the ground lamb sample was marbling and not external fat. Mutton-like is an off-flavor, and contributed the most to differences in samples. As the mutton-like attribute becomes more intense, it affects the overall likeability and flavor profile.”

Gifford said that with 150 sheep (50 in each age group), more specific data was collected. “We included intentional differentiation,” he said. “We collected samples that represented white face breeds, crossbreds, hair sheep and black face sheep. We also included some intact rams to determine whether they had a different flavor profile.”

Statistics from the project indicate that age is not necessarily related to sensory experience, and that factors other than age drive flavor. However, although data suggest that on average yearlings were milder in flavor, not every lamb in the yearling category was mild.

The bottom line is that the presence or absence of mutton-like flavor is the biggest driver of the eating experience. “Sheep producers know that,” said Woerner. “We’re trying to invent the technology to find that because it’s invisible. Quality grade and age don’t separate animals that taste good or bad, and mutton flavor is just as likely to be in young animals as old animals. So is it genetics, background, feeding or what? The instrument gives us more information, and we’ll continue working with it.”