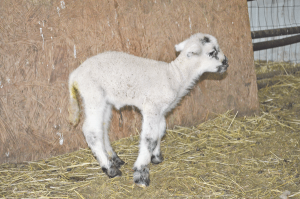 The sight of triplet lambs is a thrill for some, but most seasoned shepherds aren’t impressed when one ewe gives birth to more than two lambs. Although some ewes successfully raise more than two, most can’t do it efficiently and lose significant body condition by the time lambs are weaned.

While the National Sheep Improvement Program (NSIP) is making progress in ovine genetics, the national average lamb crop is just 110%, which means most ewes are weaning just one lamb. Rusty Burgett, NSIP director, said profitability is largely determined by pounds of lamb marketed per ewe, preferably through increasing flock prolificacy. However, increased prolificacy comes with a price – more triplets and quadruplets – which become a challenge rather than a bonus.

While the most cost-effective way to raise lambs is letting the ewe do the work, circumstances sometimes require artificial rearing. The question becomes “Which lambs should be raised artificially?” Burgett said any lamb that has a low chance of survival if left on the ewe should be removed, as well as lambs that can’t be fostered by another ewe, or if the lamb has not received colostrum.

“Make the decision to remove a lamb as soon as possible,” said Burgett. “If the lamb has been in the jug for two or three days and hasn’t had much from Mom and is borderline hypothermic and weak, it’s tough to keep them going.”

Because lambs are born without an active immune system, the most critical aspect of any artificial rearing system is colostrum. The timing of the first colostrum feeding is critical. Lambs should consume about 10% of their body weight as soon as possible after birth – no more than 24 hours following birth. Burgett suggests four colostrum feedings administered at four-hour intervals.

Antibodies in colostrum are absorbed across the gut wall, and the ability of the lamb to absorb antibodies decreases rapidly over the first 12 hours of life. Colostrum from ewes that have just lambed will be highest in immunoglobulins.

Producers have several options for colostrum. If the lamb has not received any colostrum from its own mother, the next best choice is good quality colostrum from another ewe, perhaps one with a single lamb if her own lamb has nursed. Goat or cow colostrum is a suitable substitute and contains the necessary antibodies, but the nutrient value is lower. There’s disease risk with using other species’ colostrum – cow colostrum should be from a Johne’s-free herd or properly pasteurized prior to feeding.

Many shepherds test and freeze excess colostrum. Frozen colostrum should be warmed slowly in a water bath to avoid damaging valuable immunoglobulins. If the lamb is willing to suck, colostrum can be delivered in a bottle; otherwise, it should be tube-fed. Some shepherds routinely tube-feed to save time and to ensure the lamb has received the correct amount of colostrum. Record each lamb’s birth date, what time colostrum was fed and what kind of colostrum was fed. If the lamb is chilled, do not attempt to tube feed it until the lamb has been warmed and its rectal temperature is normal (101 – 102º).

After receiving sufficient colostrum, lambs are transitioned to milk replacer. Bottle feeding works well for one or several lambs. For more than a few lambs, it’s worth setting up a lamb bar or bucket, and for many lambs, an automatic feeder is ideal. Teaching lambs to nurse from an inanimate object can be challenging, but Burgett said patience pays off and most lambs quickly learn to suck from a nipple. Milk replacer is fed warm for the first week to 10 days. At about 10 days of age, lambs should be transitioned to cold milk to decrease the risk of abomasal bloat.

Regardless of the system used, cleanliness is key. “Warm milk replacer is the perfect breeding ground for bacteria,” said Burgett. “Bacteria love a warm, moist and dark environment, and that’s what’s inside bottles, buckets or automatic mixing machines.” 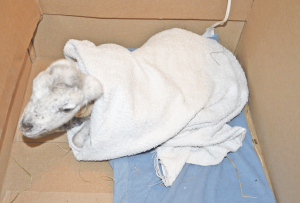 Burgett urges producers to disassemble and thoroughly clean the feeding system in warm, soapy water every 24 hours to avoid health problems in lambs. Having extra sets of hoses and nipples to switch out makes the process faster.

Burgett said milk replacer for lambs should be at least 25 – 30% fat on a dry matter basis, 20% lactose and 24% protein. Because lambs don’t have a functional rumen, fiber should be less than 0.5%. Some producers use medicated milk replacers help control coccidia. Another option is acidified milk replacer, which prevents spoilage. Burgett noted that studies in dairy calves show that lower pH allows more rapid nutrient absorption across the abomasum and lower intestine.

At about one week, introduce a highly palatable, highly digestible creep feed. Although lambs’ intake of creep feed won’t be substantial at first, introducing it early is critical for rumen development.

One lamb will consume an average of 18 pounds of dry milk replacer powder between birth and weaning at 30 days of age, with more than half of that consumption in the last 10 days. “Lambs should be weaned at 30 days or 30 pounds, whichever comes first,” said Burgett. “Past 30 days, all we’re doing is increasing the bill for milk replacer.” Fast-growing lambs that reach 30 pounds before 30 days can be weaned early. Weaning should always be abrupt – watering down milk replacer lambs leads to higher consumption, increasing the risk of bloat and scours.

Lambs that have been exposed to good creep feed at an early age have the easiest time transitioning from milk replacer. “If creep feed is introduced earlier, we can stimulate rumen development at an earlier age and ease the transition,” said Burgett. “A common mistake I see is offering hay to lambs, but they don’t have a functional rumen yet.”

Burgett said if producers are willing to care for lambs properly, artificially-raised lambs can turn a profit. No matter the flock size, the system has to be efficient and consistent, and shepherds should take advantage of automation whenever possible. “Artificial rearing systems can be cost effective if we start with healthy lambs with a known amount of colostrum in them,” he said. “If we fine-tune our skills and start with a healthy lamb, we can make our lives easier.”