Building a farm business around Thanksgiving 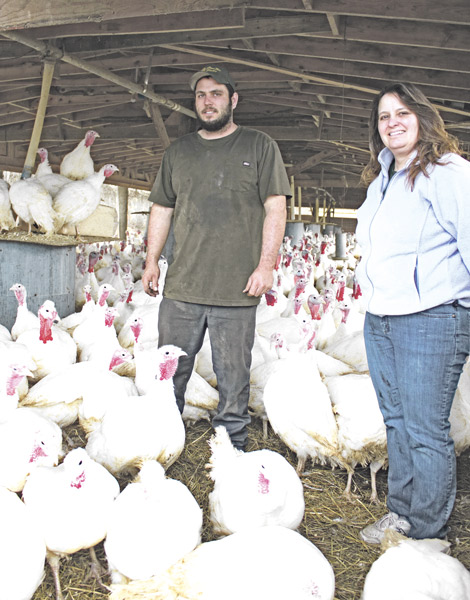 As one would expect, this is the busiest time of year for turkey farmers Tim and Pauline Henderson of Pine Tree Poultry. They spend from Labor Day till the end of December working 14-hour days so their customers can have a happy holiday.

“It’s just a wildfire,” said Pauline. “We just go get it done and it’s all a big blur at the end. This year seems even crazier than usual. Customers are placing their orders earlier and wholesalers were calling to say they’d already sold out.”

The couple, with the help of their son Tom, raise 5,000 turkeys a year on their New Sharon, Maine, farm. They receive chicks when they are a day old and keep them in the brooder until they’re big enough to handle the open-air barn’s cooler temperatures, where they have free range to dig in the dirt and a screened-in shelter from predators.

“We’re not keen on pasturing because of diseases and predators,” Pauline said. Avian flu, which can be transmitted from the many wild turkeys in the area or other wild birds, was the biggest factor in deciding to keep them in the barn. A few years ago, the region saw a large avian flu outbreak, but their birds were spared.

“It’s very stressful when you have over a thousand birds going out – multiply that by how many people are expecting them [on Thanksgiving],” said Pauline. “We don’t want to disappoint.”

The birds take approximately 20 – 24 weeks to grow to size, so the Thanksgiving birds are bought in around May. They process the turkeys on the farm. Some are sold at their farm store, which runs four to five days a week, depending on the season, with extended Thanksgiving hours. Customers need to preorder their Thanksgiving and Christmas birds, which they pick up at the farm or sites in southern Maine. Wholesalers reserve their birds by the end of August.

The holiday season accounts for 25% of their income. They purchase other birds to raise throughout the year, which they sell as premium cuts, individual parts, ground and in a variety of loose sausage flavors, including hot and sweet Italian, feta and chive, garlic, chorizo and breakfast.

Customers can also buy broiler chickens and beef, as well as value-added products, like the pot pies and empanadas they make weekly in their commercial kitchen. They sell containers of their turkey gravy around the holidays as well.

Most of their products are sold wholesale to small grocers and co-ops and at some farmers markets around the state. They market them as natural and do not use antibiotics or hormones.

Pine Tree Poultry raises around 13,000 broiler chickens that they process onsite weekly. They also have 40 head of beef cattle, which are grazed down the road and butchered off-site.

Pauline makes up to 250 turkey, chicken and beef pot pies a week, using the recipe from the previous owners of the business that she’s tweaked based on her own family’s tastes. She recently added empanadas and tourterie, a French meat pie, to offer customers something different. She sells a couple hundred empanadas a month in frozen packs of two, including turkey and veggie, turkey chorizo and buffalo chicken.

Pauline, who grew up on a vegetable farm, grows all the vegetables used in the pies and some extra winter squash and pumpkins to sell at the farm store.

Tim was also raised on a farm, and they raised their two sons on a beef cattle farm before moving on to manage a diversified farm in Massachusetts for the next 25 years. When the couple bought Pine Tree Poultry in 2015, they had plenty of experience. After looking at properties all over New York and New England, the Hendersons saw the opportunity to start their own agriculture business when they came across the turkey farm.

“The business was pretty much run into the ground,” Pauline said. “We had to rehab it to get it up to code, which took three months. Then we had to rebuild both retail and wholesale customers – we basically started from the ground up.”

They brought their beef cattle with them and soon added the chickens and expanded the processing facility.

“It’s become a way of life,” said Pauline. “I enjoy the freedom of working outdoors, working with the animals. It’s very stressful and therapeutic at the same time, but there’s a satisfaction at the end of the day I wouldn’t get from another job.”