Farmers who grow cash crops begin each season with a combination of experience, careful planning and optimism. Nathan Crooke, who owns and operates Windybush Hay Farms in Bucks County, PA, with his mother Gail, is one such farmer.

Crooke grows soybeans, mulch hay for mushroom growers and hay for livestock on about 1,800 acres. Some of the ground Crooke farms is marginally productive and much of it is prone to significant deer damage, but he’s seeing profitable yields with a three-year rotation program and careful attention to weed management. 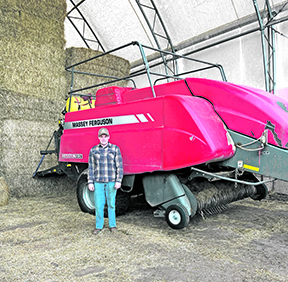 Hay is a priority at Nathan Crooke’s farm, but this year his soybean-growing skills were recognized. Photo by Sally Colby

For the past five years, Crooke has entered the Pennsylvania Soybean Yield Contest, and 2021 turned out to be one of his most successful growing years. With 112.43 bushels/acre harvested on Oct. 1, Crooke was named the Southeast Region winner as well as the statewide winner.

Although Crooke grows beans on several parcels, each with different soils and drainage, his crop management plan is consistent. In discussing the farming practices that led to a winning yield, Crooke explained his rotation program: “Some of the acreage has perennial weeds that are tough to get rid of with the usual treatments used for hay, so we’ve been trying to pick a few fields to work on each year. We till up the hay ground and put in beans – that helps stop the weed cycle. This year, with the price of soybeans going so high, I thought we could try growing soybeans on some mulch hay ground and make some money with the high soybean price, and at the same time, convert that ground to quality hay ground following wheat.”

With reasonable fertilizer prices and good bean prices in 2021, Crooke was determined to grow the best soybean crop possible. He started with an early hay burn down, hoping to kill some of the perennial weeds, but knew he’d still have to deal with dormant weeds. “We also did three passes with the disk,” he said. “Then I used glyphosate and dicamba in an early post-spray to manage milkweed, hemp dogbane and multiflora rose. We had good weed control and the wheat looks great now.”

The field that produced the winning yield is part of a 130-acre parcel in a state park, and includes multiple fields used for mulch hay. Soil tests in the fields in the process of being converted from mulch hay to livestock hay indicated low calcium, potassium and phosphorus. Crooke applied two tons of lime, 120 pounds of potassium and 60 pounds of phosphorus as well as zinc, boron and sulfur.

Using a drill on 7.5-inch rows, Crooke planted Channel 2918R2X variety on April 28. He used a two-pass post-herbicide program and applied a fungicide. He checked progress of various fields over the season to watch which were best.

“What made it a great year in Bucks County was a dry May,” said Crooke. “We got in there in April and didn’t have any wet, waterlogged soils so plants were up and established. It was wet the second week in June, dried out, then we had eight inches of rain in August.” Crooke added that good growing conditions continued through September.

Through scouting, Crooke discovered insect feeding early in the season but said the beans grew out of that. “Late in the season, because of all the rain in August, we had a second flush of weeds,” he said. “I had sprayed early with glyphosate plus dicamba with Dual as a residual for grasses. Then pokeweed came through and we were concerned about that in the beans. It was about time to put fungicide on, so we applied more glyphosate.” Crooke said the pokeweed was taller than the beans at one point but he had achieved good kill with the glyphosate. Milkweed was also present, but no marestail because the ground had been in hay for so long.

“We had treated and untreated beans and two different varieties,” said Crooke. “The day before the contest, I walked out and checked three different spots. For harvest, we picked a 15-acre field that was out in the open, away from the edges where deer are.” Beans in the acreage chosen for harvest had about five to seven pods per node, while another nearby section had about four pods per node. While seed size appeared to be large, test weight numbers didn’t back that up, and most plants had 50 to 60 pods. Crooke added that the harvested field was where he switched from untreated to treated seed, and where the field slopes for good drainage.

As the beans matured, Crooke was concerned about lodging because the crop was so tall – about 48 inches. “They were leaning pretty good, but we got under them with the combine,” he said. “The combine operator did a good job getting under them. We had some shatter loss – at least three bushels – because they were so thick.” Immediately after harvest, Crooked planted wheat for grain.

He said he knew potential deer damage would be the wildcard. “For some reason, deer didn’t go any further than 30 to 40 feet from the edges,” he said. “If we plant soybeans early and they start growing tall and fast, the deer don’t seem to want to go in them as quickly. We just realize yields on field edges will be lower.”

In addition to deer damage, there was also some damage from human foot traffic. The fields had been in hay for many years and surrounded by housing, so local residents were accustomed to walking there and continued using the former hay fields for walking. The local cross country team’s course included hay field edges, so in continuing their usual practice route, beans on the outer field were trampled.

Most of the beans Crooke grows are trucked to the Newark, NJ port for export, primarily to China and Vietnam for poultry feed or tofu. Last year, Crooke also sent beans to Perdue’s crushing facility in Bainbridge, PA.

While Crooke doesn’t have a formal cover crop program, crops are growing on all fields throughout the year. “Because we have the hay, we plant early-maturing beans,” he said. “We can put hay right behind beans if we want to. But the wheat price is high, so we do that. When the wheat comes off, we put hay in in August.”

The soybean yield contest was introduced by the Pennsylvania Soybean Board to highlight crop management practices of the state’s top soybean producers. A summary of the crop production practices from the 2021 contest entrants will be available at PAsoybean.org.