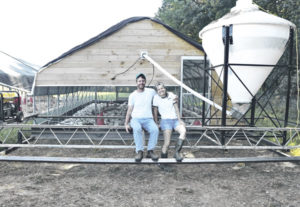 Haden Gooch and Katie Gualtieri closed on their 350-acre farm in Leeds, Maine, in May 2021, naming it Mayday Farm. It was a conventional dairy until the mid-1990s. The open land, about 100 acres, was leased to neighboring farmers until 2020 when Maine Farmland Trust purchased the property. Gooch and Gualtieri leased from MFT for a year as they worked to secure financing through the Farm Service Agency. The cornerstone of their farm business is pastured broilers, though the pair also recently signed a contract to supply organic milk to Stonyfield.

“The broilers are the bread-and-butter part of the business,” Gooch said. “We were able to buy the farm based on that business alone.” In 2021, they will raise 15,000 broilers and will ratchet that up to 25,000 – 30,000 in 2022. Currently, all of the broilers are sold to Walden Meats, a Massachusetts-based company that connects farmers with families though a home delivery meat subscription program, delivering products from New York City to southern Maine.

The wholesale relationship with Walden Meats suits them. “We enjoy the production aspects of farming and not marketing and sales,” they said. “We get to focus on how to grow birds fast on pasture and their health.” As Walden producers, Gooch and Gualtieri must sign a statement that the broilers have been raised according to specific criteria including no antibiotics and no genetically-modified feed. Broilers must be raised on pasture with at least 75% vegetative cover (after up to four weeks in a brooder) and be moved regularly to fresh pasture. At Mayday, the broiler pasture season runs from April through November.

The birds, all Cornish Crosses, are sourced from a Pennsylvania poultry farm and are raised for the first three to four weeks in two brooding facilities made from shipping containers. Gooch said, “For each brooder, we took two 40-foot-long containers, cut off the end walls and welded them together … Because of the money we saved on construction, we were able to outfit the infrastructure and controls that large chicken barns typically have.” This includes automatic heat, ventilation, food and watering systems.

From the brooders, the broilers are moved onto a 10-acre pasture into one of five 20-by-40-foot greenhouse structures with roll-up sides. Each house is on skids, allowing them to be moved daily. Two of the houses are prefabricated models. The original design of these houses was clunky, with metal bracing that needed to be stepped over, running laterally every four feet on the inside of the house. In 2021, they removed these braces and added bracing to the sides.

The frustration with the design and inefficiency of the prefabricated models inspired the pair to design and construct their three new houses themselves. They purchased the hoops and roof bracing from a high tunnel manufacturer but added side bracing, skids and automated feeding systems of their own design.

The automated feeding system is powered by a generator. Each of the new houses has a 1.5-ton grain bin attached to its frame. The generator powers a flex auger system in each house. Flex augers move grain from the bottom of the cone-shaped grain bins through flexible plastic pipes running overhead. There are drop tubes connected to the overhead flex augers, which drop grain into feeders that hold 30 pounds each. At the end of the auger network, there is a pressure switch. It senses when the final feeder is full of grain and shuts off the generator. As the broilers eat, grain continues to drop from the vertical tubes into the feeders even though the augers are not running. “With this system,” Gualtieri said, “each house can store about two weeks of grain and we only have to turn on the auger system every other day.”

For water, they have an automated gravity-fed system, supplied by their household well. Along the perimeter of the pasture is a 1.25-inch black plastic pipe. From this pipe, they run a supply line into the first house, where there is a pressure reducer. One house is connected to the next in series, and the water flows into bell-style waterers.

At an average live weight of seven pounds, they load 800 birds at a time into poultry crates and trailer them to a local poultry processor. Walden Meats takes over from there, picking up the frozen broilers and distributing them to customers.

Although selling to Walden Meats provides Gooch and Gualtieri with a guaranteed market and consistent cash flow, the pair is also aware of the potential risk of relying on one buyer. To mitigate this risk, they eventually plan to take a small percentage of the broiler business and start their own brand. The inclusion of organic milk into the farm business will also diversify the income stream.

When the previous owner stopped shipping milk, they removed all of the infrastructure from the 1980s tie-stall barn, including the stall dividers, pipeline and gutter. They plan to reestablish this infrastructure and milk 40 cows. “It’s a good barn,” Gualtieri said. “It has high ceilings and good lighting. Considering the cost of building supplies right now and supply chain issues, we’ve decided to retrofit the tie-stall for now.” When they’re ready to start milking, they plan to purchase organic replacement heifers, so they can focus on pasture management rather than raising young stock and building a heifer barn.

In terms of cattle grazing, because they are new to their land, they don’t know what their 90 acres of pasture can support and how many grazing days they can plan on in a typical year. To hedge against this, they plan to establish an annual forage system on the 10 acres that the broilers are currently using. This will theoretically provide them with a calculable amount of dry matter tonnage and allow them to take advantage of the fertility added by the broilers.

According to Gooch, at the current broiler stocking rate, this is roughly one ton of manure per acre. “This fall, we’ll plant winter triticale for an early 2022 spring grazing or for winter feed for the cows. Then we’ll move the broilers back onto the ground to help fertilize before we till again in June and plant a crop of sorghum-sudangrass,” said Gooch.

With multiple custom operators in the area, the pair does not plan on owning haying equipment. “We don’t think we could be doing this if we had to buy haying equipment,” Gooch said. In two days, one of these operators had their first crop of haylage chopped and packed into the bunker silos.

Gooch and Gualtieri see the symbiosis between the poultry and a dairy as advantageous – for the health of their business and their soil. “Poultry is really paying for the farm but the difficult thing is that it is only for six months of the year. Dairy will be a consistent form of year-round revenue,” they said. “At the same time, increasing our broiler production will hopefully allow us to add two to four tons of manure per acre on 25 acres a year. This will give us a lot of nutrients to work with and improve our pasture and forage quality.”