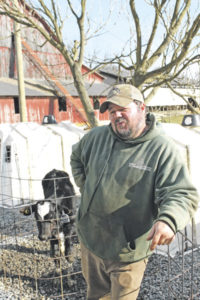 CALLAWAY, VA – On a recent sunny winter day, Tim Bowman oversaw the activity at his dairy as the afternoon milking began.

His oldest son, Will, was driving a tractor up and down the free-stall barn, using a PTO-driven blower to spread square bales of straw grown on the farm into the stalls.

His full-time milker Tommy Dunn had begun milking, the Westfalia Surge pedometers on the cows keeping track of the data Bowman uses for herd management.

A stationary vertical TMR mixer was whirring, spreading a ration almost entirely grown on the farm into the feedbunks in the barn.

His children Eugene, Isaac and Della were playing in the yard, taking turns using a pitchfork to feed hay, and his wife Monica was helping out everywhere.

“This is all I ever wanted to do,” Bowman said.

The Bowman family has been farming this part of Franklin County, along the Blackwater River, for more than 100 years. The family started out growing produce and raising chickens and turkeys in wood-sided double-decker poultry houses for the Roanoke consumer market. The family started a dairy in the mid-20th century with a stanchion barn, which they converted in the early 1960s into a double-4 milking parlor.

Tim’s father Hubert and Tim’s uncle Eugene grew the dairy, turning the parlor into a double-6 and finally a double-8 herringbone. Today, Tim and his father Hubert are partners in Blackwater Bend Dairy, Eugene having passed away a dozen years ago.

Tim remodeled the parlor about a decade ago, installing low line equipment and the precision monitoring system.

Today the dairy milks between 110 and 120 cows, just enough to keep the family, Tommy and one part-time helper busy. The herd is a mix of Holsteins, Brown Swiss, Jersey and Brown Swiss crosses.

Bowman buys in soybean meal and supplement, but otherwise grows all his own forage, including forage sorghum silage. “It’s easy to grow,” he said, “and it likes dry weather.”

The farm includes 200 acres of corn, 120 acres of grass hay, 18 acres of alfalfa and 40 acres of wheat. This past year Bowman grew seven acres of rye. Each year they make about 2,000 small square bales of straw, which is used for bedding.

Most of the corn is chopped, but some is grown into ear corn. Bowman is moving to non-GMO crops, both because he’s found it’s more profitable and because he has a market selling to a non-GMO grain broker.

It’s taken Bowman a few years to fine-tune his production method for raising Wapsie Valley corn. “I’m used to growing corn with populations in the twenty thousands,” he said. “This year I plated Wapsie Valley at 15,000 plants per acre – about as low as my planter would go.”

For the past couple of years, Bowman has had an extra tractor to run those mills, because he no longer runs his mix wagon off a tractor. When his old PTO-driven mix wagon wore out, he got a stationary system powered by electricity. “It allows me to feed any time, even when the cows are in the barn,” Bowman said. “Plus it freed up a tractor.”

When asked whether he would recommend to other farmers growing crops for specialty markets, Bowman answered, “It’s worth it but you’ve got to have enough land available to do it. You have to keep up with your own production too.”

“It takes time too,” he said. For example, for the local distillery, Bowman grinds, bags and delivers the corn. “I run a dairy so I’ve got all the time in the world,” he said with a hearty laugh.

Despite all the hardships of being a dairyman in recent years, he’s committed to keep going, to provide his children the option of running a dairy.