Booker talks of change coming to Washington at NOFA-NJ 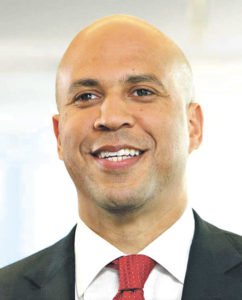 NEW BRUNSWICK, NJ – This year’s NOFA-NJ conference was virtual this year, and one of its highlights was a talk by U.S. Sen. Cory Booker.

Booker is passionate about conventional and organic farming – and taking concrete steps to reverse the effects of global climate change.

“I know you’ve all heard from many people about the challenges we face and the importance of establishing local food systems and protecting farmers and farm workers and food sovereignty,” Booker said.

“Our food system right now is very interconnected and interwoven,” he said. “We know the injustices in our food system affect environmental justice, racial justice, health justice. Food is at the locus of all these areas – not just ensuring justice but in having high levels of well-being and fulfilment in this nation – while organic and regenerative farmers here and across the country are a beacon of light showing us a way, but right now, they are too few in number.”

The broken food system in the U.S., he said, does not reflect our common values in this nation, and it is not a dramatization.

“The way we are consuming and producing food in this country right now is quite literally a matter of life and death,” he stated.

This is true for independent family farmers, who have been under attack for 60 years. Farm debt is at an all-time high, and “the farmer’s share of the consumer dollar continues to dramatically decline.

The U.S. puts massive federal subsidies into a food system that is literally making us sick, he argued, from childhood obesity and diabetes to heart disease.

Booker continued, “Scientists and public health professionals are telling us because of high concentrations of animals and factory conditions inside these [corporate] farms, and overuse of antibiotics on animals, there is a serious risk that a factory farm in the U.S. can become the source of the next pandemic virus or bug that is resistant to antibiotics and becomes a serious threat to human life.”

Booker spoke a bit about his personal journey. He said his work on U.S. agriculture and fixing the broken food system was informed by his time as mayor of Newark, NJ’s largest city. He lobbied successfully and got a Shop-Rite and several other supermarkets to open stores in Newark, including a Whole Foods.

“We were also creating more urban farms here in Newark,” he said, but after he was elected to the Senate, “I realized the scale of the problem was too big.” Food deserts were common around the nation in poor urban areas. “I traveled around the country and realized it [our industrial food system] was failing all of us, all over the country.”

In his meetings with farmers of all types, “I heard story after story from cattlemen about how years ago, there were dozens of different buyers for their cattle. Now there was only a few, or even one buyer for their meat, so they face monopolistic problems and the prices their parents and grandparents used to get were no longer possible. Ranchers were getting squeezed at every level.”

He’s met with contract growers and said they feared retaliation if they spoke out about the buying practices of the big food corporations.

Within a year of taking office, he sat down with farmers, environmentalists, healthcare professionals, consumers, climate change experts and animal welfare advocates and created a working group.

“We created a coalition to … create bills that will challenge this broken food system and get us more nutritious, healthy food, address the climate crisis, pay farmers a fair price for being stewards of their land and in fact to get them new revenue streams,” he said.

In closing, Booker said, “The challenges we face are enormous. I am excited for this next Congress because I have a coalition that includes so many of you there, that is going to tell the truth about our broken food system.