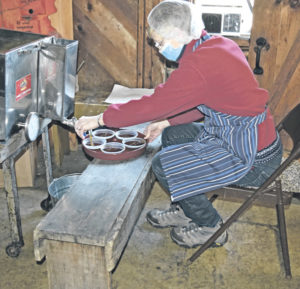 BERLIN, NH – “The process of taking sap from a tree and making it into pure maple syrup has always intrigued young and old alike,” conclude Lucien and Muriel Blais in their recently self-published book “The Sugar House on the Hill: 100 Years of Tradition and Change at Bisson’s Sugar House.”

“Each spring, as the smell of boiling maple syrup fills the air and steam bellows from the cupola atop the sugar house, visitors arrive with their curiosity piqued. They bring their questions, and they bring their sense of wonder.

“Some visitors share with us their own backyard sugaring experiences,” said the couple, both near age 70. “Whether their attempts were successful or not, their memories always seem to bring laughter and joy! We’ve heard about the scorched pots, the hours of boiling with little results, peeling wallpaper and many other tales. We’ve provided aspiring sugarmakers with used spouts and buckets and, most frequently, with advice. This is one aspect of the business we’ve always enjoyed, as did our predecessors, Armand and Juliette Bisson, and Lazare and Amanda Bisson before them.”

These sugarmakers in the Great North Woods of New Hampshire are in a nostalgic mood this year. “The transition from the darkness and cold of winter to the light and warmth of spring brings with it a sense of renewed energy and hope,” the couple said. “For the past century, the maple sugaring season at Bisson’s Sugar House has become synonymous with spring for the people of the Androscoggin River Valley and beyond into Maine. Few family businesses are fortunate enough to continue for three generations and 100 years. As third generation sugarmakers [1986 to present] shepherding our family sugaring business into its centennial year, we feel compelled to record and share our proud history from its beginnings.”

In 1921, 11-year-old Armand Bisson joined “Mon Oncle” Lazare and “Tante” Amanda Bisson as they fired up their evaporator and welcomed their first customers into their primitive “cabane a sucre” that they constructed on Cates Hill.

It’s likely it was around 1880, some 40 years earlier, that Lazare Bisson Jr. left the family farm in Quebec with his brothers Francois and Joseph to establish adjacent dairy farms in the U.S. Other family members lived in the town that by the 1920s would prosper, growing into “The City That Trees Built.”

A few years before this first sugarhouse was built, both Joseph and Odelie Bisson had died, and Lazare and Amanda had taken over raising some of their orphaned children as their own, including Armand. After Lazare died 15 years later in 1936, Armand bought the business from his heirs.

Armand continued sugaring and was later joined by his bride, Juliette Fournier Bisson, to whom he was married for 45 years. The second generation, who constructed the second sugarhouse, actively sugared until 1986.

“With time, they built on their legacy, expanding the business and constructing a new sugar house in 1953,” Lucien and Muriel explain. “Working alongside Uncle Armand and Aunt Juliette prepared us to carry on our family’s tradition and share our history.”

The book is packed with images and memories. “We were fortunate to be able to gather stories and insights from a few senior members who still have vivid memories of the early sugaring years and the people who make up its rich history as well as how sugaring has become far more science-based, all while maintaining the heart of our traditions,” they said.

Although Bisson’s dates its first full-scale sugarhouse from 1921, it’s probable that the first generation of this enterprising Bisson family began producing maple syrup on a smaller scale soon after emigrating from Quebec after establishing their farm on what was then named Blodgett Hill. “For some farmers, like Lazare, maple sugar was considered the first harvest – la première recolte,” the couple explained.

Throughout the years, Armand and Juliette continued to greet every spring with enthusiasm and welcomed countless visitors to their sugarhouse. They made their pure maple products with pride and gained particular notoriety for their maple taffy (“la tire” or “tire d’erable”) or “sugar on snow,” a French-Canadian delicacy not found at most sugarhouses in the U.S., even today.

“In the 1970s my wife Muriel and I began to assist each maple season. Just as Armand had learned the art of sugarmaking from his uncle, the experience and knowledge began to be passed onto a new generation – his niece and her husband,” Lucien explained. “We took over management of the operation in 1986.” Juliette died in 1990 at age 77. Armand kept his passion for sugaring, however, finding that its intense seasonal activity helped him cope with his loss. “He participated in making every batch of maple taffy until he was 90 years old!” marveled Lucien, noting that he lived until he was 93.

Research resulted in many changes being made to sugar making that increased the products’ purity, by becoming lead-free and also by decreasing the harm to maple trees.

Bisson’s operations now use tractors (not work horses) and plastic tubing (not individual sap collection buckets) and reverse osmosis, but Lucien and Muriel remain steadfast in still burning wood to make their maple products. The ice storm of 1998 decimated the maple trees growing in their prime sugarbush, but they lease some of the land once owned by members of the Twitchell family, who in 1966 gave their extensive property holdings to New Hampshire so the state could establish White Mountains Community College.