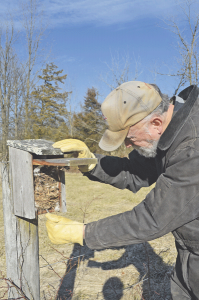 Farmers in some areas are reporting the presence of robins, the quintessential harbinger of spring. Others have heard red winged blackbirds, another sign of warmer days. But where’s the line between beneficial birds and those that cause crop damage, and are birds in decline?

A recent study evaluated 40 years of bird trend data and confirmed the suspicion that birds in all habitat types are in decline across the nation. However, there was a notable increase in wetland birds, especially waterfowl, between the 1970s and early 1990s. As a result, conservation efforts were aimed at regaining populations, and there’s hope that similar efforts will be successful with songbirds.

“Among the 1,500 globally threatened bird species, agricultural expansion and intensification is listed as the number one threat in terms of risks to birds,” said Dr. Sacha Heath, ecologist with Living Earth Collaborative. “There are declarations by several scientists that agriculture represents the greatest extinction threat to birds.”

Heath explains the reason: about 38% of open land across the globe is occupied by cropland; a biome that rivals that of temperate forests. “This means that in a lot of habitats birds depend on – deciduous forests, grasslands, scrublands – we’re seeing huge decreases in birds in those habitats,” she said. “But at the same time, we’re seeing birds that occupied those other landscapes have now moved into cropland. It’s definitely not the same community of species, but at least a subset of those birds has moved into cropland.”

“A diverse community of birds represents different diet types and foraging strategies,” said Heath. “This is important for farmers because it means different birds on the farm will reduce different kinds of crop pests, and very few bird species themselves are pests.”

Heath explained that ground-foraging species such as juncos and sparrows eat seeds in winter, but also eat pupae and cocooning larvae and grubs in the soil of perennial crops, which reduces the number of caterpillars, moths and beetles. Bark-foraging birds such as woodpeckers and nuthatches consume caterpillars and cocoons under the bark of orchard trees as well as the damaging insects that occupy mummy nuts during winter.

Aerial foragers such as swallows eat flying pests in the adult stage, eliminating them before they lay eggs that would become crop-damaging larvae the following season. Foliage gleaning birds consume eggs and caterpillars from vegetable leaves and stems, and consume crop-damaging adult insects and other herbivorous insects such as aphids.

A common misperception is that all birds cause damage, but only a few bird species are problematic and many can be beneficial. Deterring pest birds while attracting beneficial birds can help reduce insect pressure on crops. However, the interaction between birds, farms and insect pests isn’t simple.

Heath said those who want to manage better for birds on the landscape can begin by spending time observing birds. “Most species in North America do not cause damage to crops, and many are likely to provide pest control services,” she said.

Numerous resources, including the free app ‘Merlin’, are available for bird identification.

The next step is to inventory potential bird habitat on the farm. Farm maps usually include information about fields, but omit information about habitat surrounding fields. “Land that isn’t in production isn’t necessarily non-productive,” said Heath. “It can harbor and support many beneficial birds.”

Learn which birds can be problematic and determine the best way to exclude those species.

Make it easy for beneficial birds such as bluebirds, swallows and wrens to live on the farm by providing appropriate nesting boxes. Be sure to place nesting boxes in the appropriate setting, such as open field versus a sheltered area or at the top of a pole. At the end of the season, clean any nesting boxes to remove old nesting material that can attract rodents.

Visual and auditory commercial bird deterrents can be effective in some situations, but don’t usually work for extended periods of time. Exclusion, usually in the form of bird netting, is very effective and safe for birds, but is also expensive. Heath recommends a cost-benefit analysis to determine whether the value of the lost crop will be worth the expense and time required for netting.

Kestrels are small falcons found throughout most of North America, and can help in deterring pest birds. They eat birds, but they also eat insects, rodents and reptiles. Kestrels are cavity-nesting birds, and will use appropriate nesting boxes. A Michigan cherry grower found that for every dollar spent on a kestrel nest box, he saved $84 to $357 in sweet cherry yield due to decreased foraging by pest birds. Guidelines for kestrel boxes can be found online at The Peregrine Fund site.

Artificial perches attract raptors as well as red-tailed hawks, golden eagles, turkey vultures and other birds of prey. Construction of such perches should be accurate to effectively attract such birds. Perches should be placed on hilltops, away from trees, 15’ from the ground. Poles should be securely grounded with concrete or attached to an existing fencepost. Red-tailed hawks seek tall trees, while sharp shinned hawks prefer forested areas. Kestrels and barn owls are cavity nesters, so appropriately constructed boxes set at the correct height along with maintaining old trees will attract those species.

Although species-appropriate nest boxes are beneficial and will attract desirable species, boxes are only useful during the nesting season. “Perches are going to support birds year-round,” said JoAnn Baumgardner, executive director of Wild Farm Alliance. “Vegetative habitat is going to support more comprehensive, long-term bird presence. That’s because it’s providing food and a source of insects, especially if it’s native habitat and fruit.” Habitat also provides cover from predators and shelter from elements.

Riparian areas are a good place to start preserving desirable bird habitat. For large fields not surrounded by wooded areas or hedgerows, consider breaking up fields to create more edge habitat. Hedgerows have multiple benefits, including supporting beneficial insects and providing windbreaks. Baumgardner said farmers sometimes think that if plants aren’t part of a crop, they’re of no benefit, but that isn’t the case.

“Native plants are more beneficial to birds than non-native plants,” said Baumgardner. “Over 500 caterpillars are supported by oak trees, birds eat caterpillars, and feed high protein sources such as caterpillars to nestlings.”

The book ‘Supporting Beneficial Birds and Managing Pest Birds’ can be downloaded free at www.wildfarmalliance.org/bird_resource. A hard copy is available for $10.

Another comprehensive source from Cornell Lab of Ornithology is available at www.allaboutbirds.org/news/ , and includes details about how to build habitat and species-appropriate nest boxes and perches.