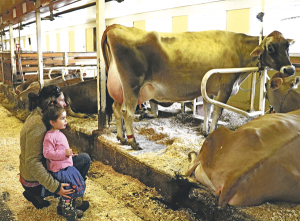 The Billings Farm & Museum celebrates its 36th anniversary this year. It celebrated mothers on Mother’s Day by hosting their second annual Draft Animal Day at the farm in Woodstock, VT. By day’s end, 468 people had visited, more than double the usual spring traffic.

Started in 1871, it is now an operating dairy farm, with a prize-winning 60-head Jersey herd, with 40 milkers. Their milk is used to produce a special line of 100% raw milk Billings Farm Cheddar made by Grafton Village Cheese Company.

Billings Farm works in partnership with Norwich Farm Creamery, which uses the rest of their milk to make yogurt, ricotta cheese, a cream line and chocolate milk. The resulting cheese can be purchased in the Billings Farm & Museum’s gift store and their dairy bar, which sells ice cream, snacks and cheese and cracker picnic lunches.

The museum tells visitors the history of Vermont’s rural heritage. Visitors view the daily milking of a Jersey cow at 3:15 p.m. After 3:30, the farmers continue with the rest of the milking with a vacuum pump, one cow at a time down a row, ending at 5:30. To make sure everyone understands the process, interpreters are on hand.

Farm manager for two years, Chuck Deome, father of seven, lives on site with his wife Amy, farm teamster. Four of their children help out on the farm – Matthew, Emily, Brian and Hannah.

All the calves are halter broke and handled often, so they are well used to people frequenting the immaculate barn. The calves are penned, still on milk with water and a little bit of grain, until three months old, when they are weaned. 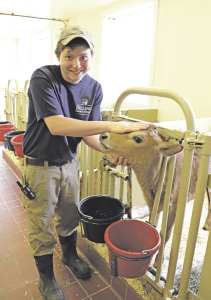 The farm and estate have been in the Billings family since Frederick Billings purchased it from American diplomat and Woodstock, VT, native son George Perkins Marsh. Billings kept adding to the farm that began with 271 acres; by the time he died in 1890 it had expanded to almost 1,000 acres. Hired in 1884, his new farm manager George Aitken imported Jerseys from the Isle of Jersey, Southdown sheep and Berkshire hogs, starting a tradition of raising animals with outstanding genetics.

By 1890, they were producing 5,000 pounds of butter annually. In 1893, at Chicago’s World Columbian Exposition (attended by over 27 million people) not only did Billings’ heifers place at the top, their heifer Lily Garfield claimed the title of Champion Heifer of the World.

In 1910, Aitken died, and the farm metamorphosized several times. They sold off the Jersey herd during the Great Depression, re-emerging as a commercial dairy in 1948. In the mid 1970s, when other dairy farmers were selling their herds, Billings Farm returned to doing what they knew best, breeding and producing champion lines of Jerseys. By 1980, they were back on top, with their Billings Top Rosanne earning the title of Best Jersey in North America. The farm currently consists of about 66 acres, and they farm neighboring fields. They also sell cattle and embryos.

The Billings Farm & Museum was started in 1983 to keep the history of the farm alive through its stories and to practice sustainable agriculture. Part of the original farm is now part of the National Park System.

“Inspired by George Perkins Marsh’s conservation ideas, Billings developed the farm to serve as a model of progressive stewardship and improvement of the rural land,” said Marge Wakefield, 20-year farm veteran, and their PR and community relations coordinator. Besides being an American diplomat, Marsh was a pioneer in ecology who wrote “Man and Nature” in 1864. He advocated that land and resources had to be managed so as to not drain them of all nourishment, or ruin them – that there was a finiteness to resources which required such management, learned from observations during his travels worldwide. Working the land with this awareness, now termed sustainability, would keep resources and farms viable for future generations. Marsh theorized in a well-documented 1847 lecture to the Rutland, VT, Agricultural Society that human actions that change the landscape can and do affect climate change.

Billings’ granddaughter, Mary Rockefeller, and Laurence Rockefeller created the Woodstock Foundation in 1968 that later became connected with Billings Farm in 1983 when the museum was established. 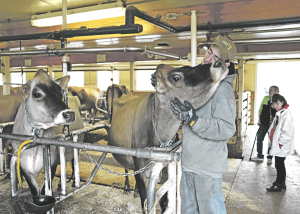 What does Wakefield like best? “I like that we’re very community-minded, and that we like to give back to the community. We do so in a variety of different ways (like the Mother’s Day event.) I like that we’re carrying on the message that history has a place in our lives. I like the fact that we are part of the continuing story.” As a seventh generation Vermonter, she has close ties to the land.

They offer a variety of interactive programs and activities with their Jerseys, Belgian draft horses, Baby Doll Southdown sheep and a variety of heritage breed chickens. Besides the visiting draft oxen and horses, on Mother’s Day, author Kristina Rodanas was on hand to speak about her illustrated children’s book, “Huck’s Way Home,” based on the true story of a one-week old American Milking Devon steer named Huck who got lost at Billings Farm & Museum after he leaped away after being unloaded off the truck. Having earned his own fame, he is now two and one of the many animals that people visit up close.