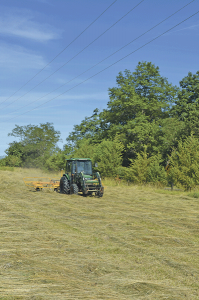 Seasoned farmers who have been making hay for years have a routine: watch the weather, cut hay, ted, rake and bale. Seems simple enough, but wet weather over the past two growing seasons has made an already challenging task more difficult.

Guidelines about when to cut hay for the best quality have all but been ignored in favor of “Let’s take a chance before it gets any taller.” Normal weather conditions in the Northeast create a challenge for anyone making hay, but this season’s combination of soggy fields and ongoing unpredictable weather patterns have led to a significant delay in first cutting, and some hay fields are still not harvested.

Understanding what happens throughout the hay making process can help producers make sound decisions about harvesting good quality dry hay. The first process, which begins as soon as forage is cut, is moisture loss through respiration. Respiration continues until moisture content is below 40%. Ground moisture, relative humidity and sunlight all influence the speed of moisture loss.

Experts on hay making, including Dan Undersander, now retired from his work as a forage Extension specialist at the University of Wisconsin, said retaining leaves is the key to hay quality. Undersander participated in a study on hay quality that analyzed more than 600 hay samples from various sites. “Leaf percentage accounted for 70% of the difference in forage quality,” he said. “If you’re losing leaves, you aren’t just losing dry matter – you’re losing quality.”

The key to minimizing dry matter loss involves a combination of baling at the appropriate moisture level to prevent heating, and storing baled hay to prevent moisture from entering bales. Once hay reaches 40% moisture, additional dry matter loss is the result of tedding, raking and baling. Dry matter loss from these processes can be minimal or quite significant, so it’s important to watch both weather conditions and moisture levels in cut hay. Since this loss cannot be reversed, it’s important to minimize processes that shatter leafy material. Dry matter loss is minimal when hay is crimped or crushed at the time of cutting.

Every farmer who makes hay has a way to determine whether hay is ready to bale, and many farmers use methods passed down through generations. Some take a wad of hay, twist it in a knot and look for a bit of moisture, while others listen for a certain crunch in the windrow. While experienced hay makers will say they can “just tell” when hay is ready to bale, it’s a good idea to combine experience with science to make decisions that will influence the diet and performance of livestock through winter. 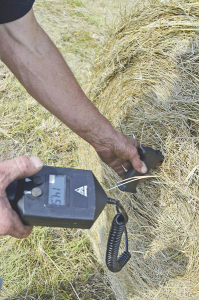 The moisture content of hay in a windrow can be tested with a moisture tester, and results are fairly accurate if the sample is properly prepared. Start by collecting loose hay from a windrow and pack it into a 10-gallon bucket. Pack the hay as tightly as possible to closely simulate baled hay. The sample should be mixed well, added to other representative hay samples, repacked in the bucket and sampled several more times. Even under the best of conditions, moisture tester readings vary, so it’s best to record readings and use an average of several readings to obtain the most accurate results.

Hay for moisture testing should be selected from the densest areas of the field, and from several different areas. The double, outermost windrows are usually the heaviest, and are sometimes shaded for part of the day. Turn up several sections from these areas by hand, and determine whether the windrows require another raking to tip the underside of the windrow outward for additional drying.

One challenge with large square or large round balers is that the hay in a given bale dropped in one part of the field often includes hay that probably didn’t come from that section of the field. If the hay field is well-groomed and fairly open, moisture readings throughout the field will be fairly uniform. However, bale density varies, so if a bale is comprised of more than an average amount of dry leafy matter, the reading might be lower and inconsistent with the rest of the bales.

Moisture testing of several bales is important to ensure all bales are suitable for storage. The moisture meter should have extended probes that can reach as far as possible into the bale core. Keep in mind that if readings in a field vary widely, more samples should be tested.

Note high moisture high readings and the location of those bales. If the same person rakes and bales, it’s easier to keep track of which bales came from various sections of the field. However, in many cases, one person is raking and another follows with the baler, making it more difficult to track the origin of bales.

It costs the same amount to make good hay as it does to make bad, and no farmer plans on untimely rain, but it happens. Depending on the stage of curing when rainfall occurred, it’s often possible to salvage some of the nutritional value. 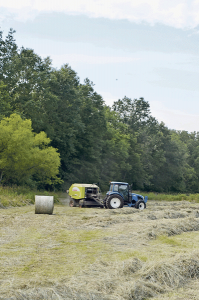 If rain falls on hay that’s curing or cured and ready to bale, respiration starts again and leads to nutrient leaching. Rain on hay that’s been cut but not tedded or raked probably has the best chance of turning out relatively close to what it would have been without any rain. Rain on tedded hay can be fairly minor or quite serious, depending on the thickness of cut hay, the amount of rain and when the rain falls. Raking hay is a commitment – once hay is raked, anything more than a light sprinkle on windrows will result in serious deterioration and potential loss through mold.

What if time is running out and there’s no way to make hay? There’s still a chance to make decent hay at the end of the season as long as conditions are favorable. As many seasoned farmers have said about over-mature hay, “It’s better than snowballs.”