Behind the bulls and the bright lights 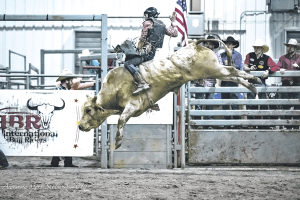 In a world where photographs of “happy families” are dangled in front of us on a daily basis as a way to get us to buy this or that while the normal family often disappears into the small screens of handheld media devices, farming and ranch families have held tough in their unity.

Busy? Yes, they are busy but they are all working toward a similar goal, and at the end of those long days there is that good feeling of still being a tight and functioning unit that has each other’s backs.

Since 2001, when a new bull riding group – the International Bull Riders Association – was established at the J Bar W Ranch in Union Bridge, MD, there has been a major upswing in interest in all things bull, from the riding to breeding and genetics, livestock contracting and even to happily sitting on the bleachers being a dedicated fan (of which there are ever increasing numbers each year).

Each year the IBR pays out over $100,000 in prize money and awards, and states that, “The northeast is alive with exceptionally vigorous bull riders, and it is the IBR’s goal to provide generous prize money, impartial judging, outstanding livestock and a triumphant victory for an International Bull Rider!”

The IBR association recently finished its 2018 finals, which were held at the Shipley Arena at the Carroll County Ag Center in Westminster, MD. In spite of harsh weather that felt more like winter than spring, the stands were full of spectators who were there to watch the $10,000 added money ride off as well as the mini bulls with the mini cowboys making their rides.

Before the show there was a “Little Wranglers Rodeo” when the kids got to go right into the lighted arena and see what it was like in there, minus the bulls. Unlike other professional sports, this was time set aside for the spectators to share the feeling of what it was like to be in the spotlight. 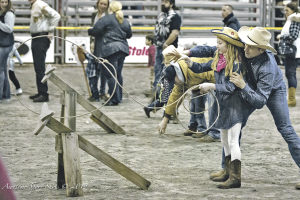 There were some kids on stick horses, some kids who were a little shy and hung back, and there were some young girls taking those moments to learn what it was like to swing a rope and catch a roping stand set up for that very exercise, with a real cowboy there to teach them how to send that rope sailing out to catch something.