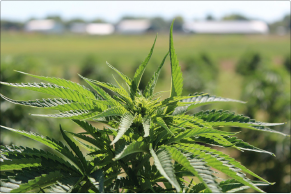 As hemp production ramps up nationwide, it’s vital to understand the laws managing its cultivation and the latest on cultivation practices. Dr. James DeDecker, director of the Michigan State University Upper Peninsula Research and Extension Center, recently spoke on hemp regulation and production.

Hemp (Cannabis sativa L.) is the same species as other types of cannabis used for other purposes, particularly marijuana, DeDecker said. The percent of THC is what sets it apart – hemp is less than 0.3% THC.

Hemp is an annual broadleaf plan. It grows tall – four to 13 feet – and is competitive, tap-rooted and photoperiod sensitive. Day length is important for triggering flowering for this plant. Hemp is also wind pollinated. The variety of hemp selected depends upon its end use. Hemp produces two types of fibers, including the textiles and the woody core, seed or grain, non-seed oils and extracts.

The basts, like bark, are longer and of a higher quality for making textiles and rope. The woody core parts are called hurds or shivs. They are shorter, woody, of lower quality for animal bedding, compost and other products. Some farmers combine the top of the plant for seed and use the stalks for a secondary product – or till them back into the soil.

“Hemp seed could go into a few different potential markets,” DeDecker said. He mentioned reselling it for crop planting, although the quality would likely be low outside of a qualified breeding program. Other areas include hulling it for food, crushing it for oil and cake byproducts.

“It’s an oil seed and high in protein, so we use that in human food and potentially in livestock, although it’s not legal to use it in livestock food in the United States,” DeDecker said.

He added that cannabidiol (CBD) is one of about 100 different cannabinoids concentrated in the glandular trichomes (specialized hairs) of flowers and leaves. “There are about a million different products using CBD at this point,” he said. Research is just getting started for the uses of CBD. Products including tinctures, skin cream and oils tout numerous claims of relief from anxiety, pain, sleeplessness and other ailments.

“Another niche use of CBD hemp has popped up – smokable flowers – a market for those wanting the smell/feel of smoking marijuana without the psychoactive effect,” DeDecker said.

“There are a lot of things we can do with hemp, but which things are economically and technologically viable is another question,” DeDecker said.

The top two inches of the plant are sampled for THC, as that would be the part with the highest concentration in the plant. The sample is taken during a specific time because “THC concentration is dynamic throughout the lifetime of the plant,” DeDecker said.

The sample must not be taken more than 15 days before intended harvest date and compliant crops must be harvested within 15 days of receiving results. Non-compliant plots may be resampled twice, or must be destroyed.

Hemp benefits from fertile soil and fertilizer – 110 pounds of nitrogen per acre for seed and 50 pounds/acre for fiber. Follow the recommendations of soil tests for potassium according to winter wheat, although it may need more for fiber. Add sulfur and other micro-nutrients as needed.

DeDecker said site preparation includes planting when soil temperatures warm to greater than 46º F, but no later than early June due to photoperiod. Tillage is generally recommended, but no-till can work with even moisture, good seed-to-soil contact and weed control. CBD systems often use plastic mulch, irrigation and cuttings or transplants.

“All hemp at this point is non-GMO,” DeDecker said. “Protected varieties versus public varieties are out there. Some people are attempting to save seed or start their own breeding program. Because it’s wind-pollinated, I’d strongly discourage anyone from saving seeds unless they’re an experienced seed producer or plant breeder.”

DeDecker said cannabinoid production differs from fiber or grain. It has fewer plants – 1,500 to 3,000 plants/acre. It features female plants only, often grown from cuttings, transplants or feminized seed. If it’s not feminized, you need to rogue out male plants. That method is labor intensive and takes up space that could have been dedicated to growing useful plants. Farmers must also maintain isolation of three to 15 miles from other cannabis to avoid cross-pollination and very wide spacing to encourage branching and flowering.

Pest management is an area where hemp farmers have it easy. “There are not a lot of pest issues – in this case insects – because we have not been growing much cannabis or hemp in the United States,” DeDecker said. But many insects can and will feed on hemp. He said he expects pest buildup over time as the crop becomes more abundant. These include defoliators, borers and sucking pests. There are currently two insecticides labeled for use in hemp.

Bud and flower protection are most important. The plant is susceptible to many different pathogens, according to DeDecker. In the soil and roots, these include pythium, phytophthora and fusarium. Foliar pathogens include hemp leaf spot, cercospora, septoria, powdery mildew and rust. In the stems, look for white mold; on flowers, botrytis bud rot.

“There are zero herbicides currently labeled for hemp in the United States,” DeDecker said. “Thankfully, hemp can be quite competitive with weeds once you have canopy closure.” Starting with a clean field and choosing fields with low weed pressure makes a big difference.

Hemp pests include birds, which love to feed on the seeds, DeDecker said.

DeDecker said fiber hemp is mowed and windrowed between early bloom and seed set and left in the field for a five-week “dew retting” process. It’s an Old English pronunciation of “rotting.” Microbes break down some of the fibers. Fiber hemp harvest should take place when it has less than 15% moisture.

“Some overwinter it under the snow and deal with it in the spring,” DeDecker said.

Grain hemp is harvested when shattering begins – between 22 – 30% moisture. Plants are green at harvest. Some farmers use a conventional combine to harvest, but some minor modifications are required to prevent stems from wrapping in parts of the combine. Setting the headers up high helps.

“It’s actually pretty straightforward,” DeDecker said. “Draper heads are recommended to try to move that seed into the combine. We’re doing this when the crop is still green because it’s an indeterminate plant. You’ll have a mix of mature seed and immature seed at the time of harvest. We want to harvest when we have most of that seed, 70 – 75%, matured. It has to be dried and cleaned very rapidly, within two or three hours after harvest, because that green seed with its high oil content will lead to degradation pretty rapidly.”

Most CBD hemp is hand harvested, followed by hanging whole plants to dry. Good ventilation can aid the harvest.

Growers in 2017 in Kentucky received an average price per yield of $1.70/pound for grain, $0.34 for fiber and $7.20 for floral. DeDecker said those figures likely reflect elsewhere in the country.

Previously, lenders were hesitant to lend for hemp operations, but DeDecker said that is changing quickly as federal regulations become finalized. The USDA’s Risk Management Agency announced coverage for hemp under Whole-Farm Revenue Protection program for crop year 2020, but growers must have a contract for the purchase of industrial hemp.