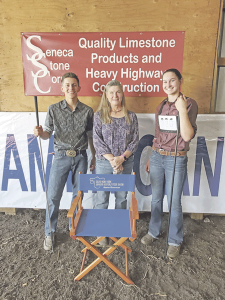 On Saturday, June 20, youth exhibitors and their families gathered at Tullyfergus Farm in Lyons, NY, for the first of several shows organized recently, inspired and driven by Phil Paradis and Jeanne White of Simme Valley, Groton, NY.

As trucks and trailers began to roll in on a beautiful sunny morning they were quickly unloaded of cattle and tack into the 120×50 barn. The cattle were stalled all around the inside walls with a few in stand-alone panels in the center. The south end of the barn held the showring and announcers booth.

At 11 a.m. everyone stood and honored our country with the national anthem and thanks for our servicemen and women, first responders and law enforcement.

Judge Cindi Shelley, Cobleskill, NY started with our showmanship classes. 30 exhibitors were put through their paces.

Winners were as follows:

After showmanship a break for lunch was taken, a chance to relax and visit with friends for a while.

All Other Breeds (AOB)

Huge thanks to many sponsors:

Special thanks to Skip Lear for steer weigh in and line up.

Paige Henderson for handing out prizes.

Linda Groom for food and refreshments.