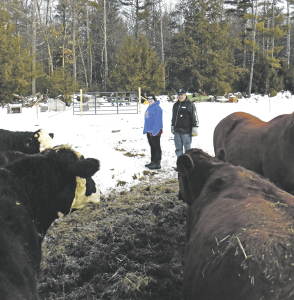 Kenny Mathews has a background in dairy farming, and Lori-Lee grew up with a variety of animals, including cattle and horses. When they connected about 20 years ago, they knew they wanted to raise cattle, and Lori-Lee is the one who determined it would be beef cattle. Today, they’re raising Beefalo at KLM Farms in North Berwick, Maine.

Kenny and Lori-Lee started their herd with Herefords, then started to experiment with crossbreeding. They purchased their first registered Angus heifer in 2004 from a long-time Angus breeder, then made the switch to Beefalo.

Lori-Lee explained their interest in the Beefalo breed. “It started with my uncle, who had bison in Allagash, Maine,” she said. “I loved the bison, but it wasn’t feasible for us to have them down here. We found Beefalo and stuck with those.”

A full-blood, registered Beefalo animal is a 37.5% American Bison cross. The remaining percentage can be any other domestic cattle breed, typically selected by the breeder based on herd goals. According to the American Beefalo Association (ABA), Beefalo are sometimes confused with the bison hybrid Cattalo, but Beefalo are distinctly different in appearance and are easily recognized as cattle.

“The lowest percent allowable is 18.5%,” said Lori-Lee. “Animals are DNA tested for percentage and eligibility for registration. We have some animals that are lower percentages but they still have some of the characteristics of the bison. It could be the coat, the tail, or the animal might have scurs.”

Lori-Lee said the early breeders of Beefalo perfected the cross and were instrumental in ensuring Beefalo would remain a viable breed with a diverse genetic pool. Since the breed has expanded and grown in popularity, breeding one full-blood Beefalo to another full-blood Beefalo results in a reliable cross. Lori-Lee said they’ve been using one registered Beefalo bull for several years, and are currently waiting for a new bull from a breeder in Vermont.

Many of the crosses at KLM Farm have been with Angus cattle, some red and some black. Kenny and Lori-Lee are also experimenting with using Pinzgauer as part of the cross. “I like the temperament of the Pinzgauer,” said Lori-Lee of the breed originating in Austria. “The temperaments of the Pinzgauer and Beefalo are exceptional.” After working with several cattle breeds, Lori-Lee said she and Kenny are partial to Red Angus to use in a crossbreeding program.

“Any female that is 18.75% or higher can be bred to an 18.75% bull,” said Lori-Lee, adding that it’s always better to breed to animals with the highest percentage possible. “Any animals between 37.5% down to 18.75% are DNA tested for registration or meat certification, whether it’s a bull or a heifer.”

While bison require exceptionally strong fencing and handling facilities, Beefalo can be handled just like cattle. It’s important to both Kenny and Lori-Lee that their animals are manageable, so they handle young calves from the time they’re born. “We want them to be handled because we show them,” said Lori-Lee.

Lori-Lee said the care and feeding of Beefalo is similar to other beef breeds, with the exception of limiting protein intake to prevent laminitis, which is also a problem in bison that are overfed. The KLM herd is on pasture with a mineral supplement, and receive a minimal amount of grain toward the end of finishing. Animals fed for processing mature at different rates, depending on the cow breed in the cross. The hanging carcass yield of Beefalo is higher than most beef at 60% to 65%.

The KLM cowherd is pastured at a location where KLM Beefalo cuts are being sold, which allows people see the animals and helps promote the product. In order to help potential customers learn to enjoy Beefalo, Lori-Lee explains how to cook it properly. “We tell people to sear it or cook it slowly,” she said.

Lori-Lee said the ABA is seeking a stamp of approval from the American Heart Association because Beefalo meat is exceptionally low in fat. “It has fat, but not as much as other beef,” she said. “It has good marbling, but it depends on what the animal has been crossed with. When it’s fried, there isn’t much fat left in the pan.”

It has been Lori-Lee’s experience that when people try Beefalo for the first time, some like it – and some love it. “It depends on what they’re used to eating,” she said. “We give away a lot of meat because we want people to try it. Ninety percent of people who try it will come back and buy it.” In the future the couple plans to sell to restaurants, but Kenny said they’ll need to increase the herd size in order to maintain a steady supply of meat.

Lori-Lee and Kenny prefer to wait to breed young Beefalo heifers for the first time until they’re at a healthy weight and structurally sound, with the minimum age around 15 months. In order to have meat available throughout the year, Lori-Lee and Kenny leave a bull in with the cows year-round. Cows that calve in winter are housed inside as their calving date approaches.

The herd is vet-checked and vaccinated annually to ensure all animals have the necessary paperwork prior to shows. In addition to exhibiting at the well-known Fryeburg Fair in autumn, Lori-Lee and Kenny exhibit animals at the Acton Fair. Animals returning from shows are isolated temporarily for observation.

Lori-Lee said one of the main goals at shows is to provide information so others can learn about Beefalo. “It’s important to educate people,” she said. “When we used to take animals to a fair in New Hampshire, people asked a lot of questions.”

KLM Farm is a member of the Northeast Beefalo Association, and Lori-Lee handles the Facebook page, website and email for the organization.