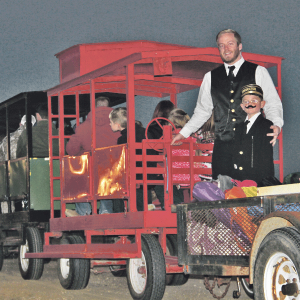 “Because hogs aren’t enough!” – a pretty simple answer to a pretty straightforward question. Why did the Peterson family, which for five generations was already a very successful contract hog grower in Clinton, NC, decide to branch out into agritourism?

Already overseeing an operation with a capacity of over 7,300 hogs, and with a longstanding partnership with global food company Smithfield Foods, Tammy and John Peterson began in 2008 to brainstorm ways they might use their expanse of 30 acres to create new business opportunities.

“We wanted to provide some fun in Sampson County,” said Tammy. “It all started with our corn maze. It opened in September 2008. We called it Hubb’s Corn Maze, after my father, James Hubbard Butler. Most called him James Hubbard, but some people called him Hubb for short.”

The 2019 maze design, celebrating the 50th anniversary of the Apollo 11 moon landing, covered more than 10 acres and included several separate mazes of varying skill levels. Each maze had its own interactive scavenger hunt within.

Tammy credits her father with teaching her the importance of being both a farmer and an entrepreneur. “He could figure ways to continue to make money through agriculture as agriculture changed – continuously diversifying is what has kept this family farm alive,” she said.

The Petersons have taken that lesson to heart, and the corn maze was just the beginning. The “Animal Acres” attraction gives both parents and children the chance to visit with miniature horses, chickens, goats, rabbits, sheep, llamas, donkeys, alpacas and more. At the “First in Flight Mini-Zip Line,” children weighing 100 pounds or less start from a platform 10 feet high and zip 100 feet through the air in 12 seconds – the same amount of time the Wright Brothers stayed aloft during their first attempt to fly.

The “Human Foosball” game has proven to be an extremely popular team building activity for corporate retreats. Players find themselves in a supersized version of a foosball table and kick away to see which team can rack up 11 points first.

At “Paydirt Pete’s Treasure Mine,” children line up on either side of a mining sluice hand-built from an old livestock feeder and feed troughs. After discovering gems, fossils or arrowheads, visitors receive an identification card to describe what they found, and both the ID card and treasures are theirs to keep. 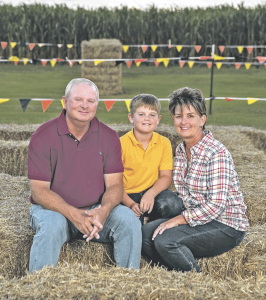 According to Tammy, “Our egg hunt seems to be one of our most popular events of the year.” As Easter approaches each spring, the Petersons hire a local crop dusting pilot to fly his Cub Cadet airplane low over the farm, dropping up to 3,000 brightly colored plastic eggs in a freshly mown field. “As soon as it’s safe, we let the children loose to grab as many eggs as they can.”

For the Christmas season, families can enjoy “Hubb’s Express and Santa Too!” Santa is available before and after a showing of the movie “Polar Express,” and the staff are decked out in full train conductor uniforms.

Always on the lookout to expand their offerings, Tammy is excited to share plans for the farm’s next big projects. Hubb’s will be hosting an event in the spring for Helping Hands of Sampson County, a nonprofit organization dedicated to recognizing first responders in the community. “We’re also going to be hosting a beach music festival. We’ve already got some great bands booked. It’ll be another chance for guests to visit us and have a family friendly time filled with fun food and music,” she said.