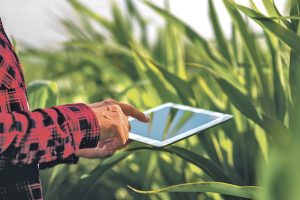 Reliable, high-speed internet in rural regions has been an issue for decades. City centers and villages can download movies in minutes; meanwhile, those traveling some country roads need to let others know their approximate locations in advance because there is no service available in case of an accident. Work and school from home situations that have been ongoing since March have only highlighted the need for better internet for all – but especially farmers, as even that profession requires more connectivity.

In October, Eric Frederick, vice president of community affairs for Connected Nation (a nonprofit with the goal of improving lives by providing innovative solutions that expand the access, adoption and use of high-speed internet and its related technologies) explained in a Michigan Farm Bureau webinar, “Broadband is high-speed internet – really anything except dial-up.” There are three categories of connections: fixed terrestrial (cable, fiber and fixed wireless, which is designed for stationary use, as utilizing one tower is easier than running wires to every home); satellite, which Frederick said should be “a last resort option for broadband – if it worked the way it should, we wouldn’t be talking about the need for broadband”; and mobile, which is a connection for smartphones or devices that theoretically should be kept constant, but we know has gaps.

The speed of those connections is defined by how fast you can download or upload something. When Connected Nation started in 2009, high speed was considered to be 768 kilobits/second; today, it’s 25 megabits/second. (There are 1,000 kbs in 1 mb, so that’s more than 32 times faster.) Frederick pointed out that the needle is always moving; judging by 2009 standards, the goal of providing high-speed internet to all Americans has been achieved. “But if we look 10 years into the future, we will need faster speeds as we consume and produce more data,” he added.

Federal Communications Commission Chair Ajit Pai said closing the current digital divide is his top priority. The commission is moving forward with its Rural Digital Opportunity Fund to build high-speed internet in underserved areas with speeds of no less than 25 mbps download and 3 mbps upload.

One of the many rural-focused organizations relentlessly pursuing the need for better internet connections is the National Grange. The Grange led an online petition earlier this year urging Congress to include emergency rural broadband deployments in the next coronavirus relief bill, and many of those in the Senate and in Congress – as well as those running against them in the most recent election – stated expansion of broadband was a priority.

Betsy Huber, president of the National Grange, told Country Folks, “It’s been proven through this pandemic that so much of our life now depends on having internet access. Education, since mid-March, has depended on the internet. In my area, most school districts are all virtual – what do kids do when they don’t have good access at home? Healthcare was an issue, even before the pandemic, and high-speed internet means elderly people could use telemedicine to save trips that could take hours or all day. And now to avoid infection, telemedicine is excellent for saving time, saving money and saving risk.”

Grange members seemed to agree, as more than 600 of them took action across the country by contacting government officials regarding broadband. “We’ve written a lot of letters to Congress and the FCC,” Huber said.

She serves on the FCC’s Broadband Deployment Advisory Committee, examining roadblocks and problems and trying to facilitate private companies to deploy to rural areas. She’s also part of a working group in the Precision Ag Connectivity Task Force, which focuses on what farmers need to use their precision ag equipment – including quality internet. Precision ag equipment saves farmers money and saves the environment by not wasting inputs, according to Huber.

The key is mapping where broadband access is still lacking. “We can’t have providers build where it’s not needed,” Huber said. “But we can’t wait two years or five years for that to happen. We need it next week.”

According to a recent report by the FCC, 80% of the 24 million American households that don’t have reliable, affordable high-speed internet are in rural areas. Frederick said the first step in fixing that is access to infrastructure. The lack of it happens in rural regions because it’s expensive for private companies to expand – the low household density is the biggest barrier. Federal and state governments are stepping in to provide subsidies to private companies to make that expansion happen.

In the first round of the ReConnect Program, USDA invested $698 million in high-speed broadband infrastructure to create or improve connectivity for rural customers in 33 states. To date, USDA has announced $529 million for projects in the second round of funding, for a total of $1.28 billion invested.

In July, USDA invested $13 million through the ReConnect Program to provide broadband service in Maryland, including 8,607 people, 144 farms, 183 businesses and eight educational facilities. Voters in Maine approved $15 million in bonds for high-speed internet infrastructure. (For a full listing of recent awards, visit usda.gov/reconnect/announcements.) The support is there. It just takes time for upgrades to take place.

Infrastructure is one piece of the puzzle. Another is the affordability of connection. “That’s something a lot of people struggle with,” Frederick said. In Michigan, 22% of homes without high-speed internet access lack it because they can’t afford it.

“We’re in the middle of a decade of government ‘intervention,’” he continued. “We’re seeing the private sector failure, and the FCC offering subsidies. Private and public capital are coming together to solve the problem. We’re also seeing more local and regional partnerships.”

Huber referenced a group in central Pennsylvania which formed a nonprofit called the Rural Broadband Cooperative. They built a $1 million tower for about $50,000, using funding they raised themselves. They cleared land, built a complex with solar panels, placed a tower on the spot and created their own service for getting people online.

A study by the Community Policy Analysis Center of the University of Missouri showed that farming is becoming increasingly reliant on broadband connectivity. The study found that profits at farms without broadband access are nearly 70% less than farms with high-speed internet access. The faster speed allows farmers to quickly check commodity prices, complete government paperwork, use advanced GPS technology to accurately measure inputs and even expand their markets, selling their goods via online stores.

What can farmers do to keep closing the digital divide? They can take matters into their own hands, like the group in Pennsylvania, or they can stay active by keeping in touch with their local, state and federal elected officials. Sending an email or making a phone call to ensure broadband access remains a priority after elections will make a difference.