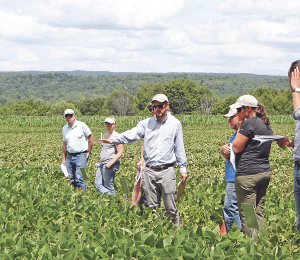 Herbicide classification charts and weed identification guides may not be on your ‘Christmas wish-list,’ but if you’re reading this, maybe they should be.

Eye-opening research and recent discoveries of new patches of herbicide resistant weeds are prompting producers and agencies alike to open their guides to take a closer look at what they are seeing, but maybe not recognizing, in their fields and travels.

“Late last summer we had a few different growers say, ‘I’ve got these pigweeds that survived different herbicide applications. My sprays killed everything else. It wasn’t a calibration issue or a nozzle issue. I don’t think it was the weather. I think it might be resistance.’”

Brown said people from Cornell Cooperative Extension went out in the fields and took seed samples.

“I actually took that seed,” said Brown, “and grew out those plants in the greenhouse down in Ithaca, and got the plants up to about 4 or 5 inches tall. And, in addition to those populations that we thought might be resistant, I also got in some seed from Canada that we knew was susceptible to herbicides. We grew them up and I sprayed them with four different herbicides.”

Brown remarked that Cobra was effective, which is a good sign because this Group 14 herbicide has been documented to have lost control in other states.

Although Cobra was a bit harsh on the soybeans, it did show control of waterhemp.

Brown freely distributed ‘Take Action Herbicide Classification’ wall posters to attendees, encouraging them to hang them in a place where they could look at, learn and compare herbicides for future rotations.

Brown showed an example of waterhemp that he pulled from one test-plot and said early detection and identification of this weed is one key to control. As waterhemp has been documented to grow at a rate of 1 to 1 1/4 inches per day, timely herbicide application, before it reaches 4-inches in height, is critical.

“If I was just driving by, I would call this a pig weed,” said Brown, displaying the weed. “But, it’s a little different than our usual red-root pig weed, or our smooth pig weeds. The main difference is that it’s hairless. It doesn’t have any hairs on the stems or leaves. That’s the first big hint that it’s either waterhemp or Palmer amaranth. The second thing I look at is that the leaves are thinner. They’re kind of narrow and more elongated than our typical pig weed, which have more of a roundish leaf. It’s got kind of a shiny leaf.”

Jeff Miller remarked that “waterhemp, unlike marestail, drops its seed close to the plant and there isn’t much, if any, off-site movement, except with the harvested crop on equipment used in the field — and maybe off the grower’s shoes.” 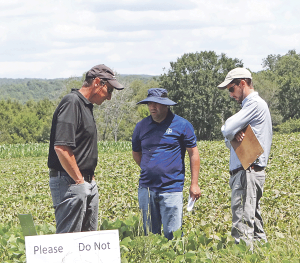 “So this is a localized issue for now,” said Miller.

Farmers have realized that seed has been brought into their farms from other states through movement of machinery and through other commodities.

Miller said, “If you are seeing horsenettle, milkweed, dogbane, field bindweed and other broadleaf perennials, moving to Extendimax and Roundup in one growing season might help to clean up these weeds when combined with an appropriate herbicide program in corn the following year. For growers who don’t have Roundup resistant waterhemp, by far the most effective and economical program is Roundup alone — even if you are using the highest rate.”

Miller reflected on results shown by the soybean test plots.

“What I gleaned from the study given the treatments that were applied; the pre-emergence application of Valor® XLT and Metribuzin controlled the waterhemp and other grass and broadleaf weeds found on the site at an approximate cost of $32/acre including a $13 application fee.”

“The post-emergence only treatment of Roundup Powermax and Extendimax (low volatile Banvel) was also successful at controlling the waterhemp and other grasses and broadleaf weeds on the site.”

Miller said to note that the rating for waterhemp control was lower than the Valor® XLT + Metribuzin pre-emergence application.

“That is because the post treatment was applied July 5th and the rating was conducted on July 19th. I think we all expect that the later rating results will improve. But this does underline the fact that weeds are controlled later in the season. What is the impact from this delay?” he questioned.

“The other treatment to look at is the Cobra treatment,” Miller advised. “Bryan and Venancio (Jose Venancio Fernandez, Bayer Crop Science) have gained insights from this season and are planning to change treatments next year to look at different combinations that may provide effective control at lower cost.”

“Herbicide resistance is a very important topic that needs to be talked about on a daily basis with farmers, as we are now finding some of these more difficult to control resistant weeds,” said Mike Hunter.

“We commonly find both red-root and smooth pig weed in both corn and soybean fields,” Hunter said. “There are several locations of suspected resistant tall waterhemp all the way from Orleans County to Oneida County. In October of 2018, Palmer amaranth was confirmed in Seneca County which is the first known finding of this weed in New York.”

Two days after this Barneveld meeting, tall waterhemp, suspected of resistance, was discovered in Jefferson County.

“This find of tall waterhemp brings our total number of counties with waterhemp to 10,” confirmed Hunter. “While significant to find this in Jefferson County, there are many other counties with much bigger, widespread and established populations of this troublesome weed. We also have a growing list of counties in New York with resistant marestail.”