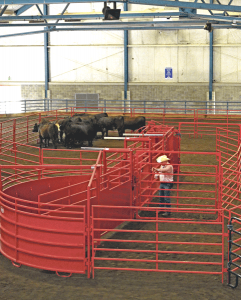 Anyone who has worked cattle with a spouse or other family member knows the process can lead to tension and arguments. Cattle become stressed because they’re crowded and forced to move unnaturally, and noisy gates and tight spots are uncomfortable and unfamiliar. People become flustered, try to rush, and everything falls apart – including family relationships.

Dr. Ron Gill, professor and livestock specialist for Texas A&M AgriLife Extension, said stress for both humans and animals is not a requirement while working with cattle, whether it’s for routine health checks and vaccinations, sorting animals for market or conducting pregnancy checks. Gill shares his knowledge about safe and effective cattle handling around the nation through both Extension and for the National Cattlemen’s Beef Association’s (NCBA) Stockmanship and Stewardship program.

According to Gill, stockmanship has very little to do with cattle and everything to do with humans. Good stockmanship is about improving performance, improving safety for those who work with cattle and improving the quality of life for those raising cattle. “Of all the other things you can do to increase productivity on your operation, most of them cost money,” said Gill. “Stockmanship is one of those tools that costs you nothing other than a little time investment learning how to do things better so you can make more money.”

Gill said for cow-calf operations, stockmanship saves money in both labor and facility repair. Proper handling also reduces shrink. “If you take calves off cows and take them to market, they’ll shrink – you just don’t know it,” he said. “They’ll lose 6% to 12% of their total body weight from the time you take them off your place until they’re sold at the market.” With good stockmanship, cattle are less stressed and shrink is reduced. “We don’t have to handle them as much, and it’s much quieter,” said Gill. “They don’t lose as much body weight, and that’s money in your pocket.”

Stockmanship in tight areas such as handling facilities begins with understanding pressure and release. When cattle are faced with pressure, they move away from it. In most cases, cattle handling difficulties are the direct result of handlers rushing.

Good flow begins with the way cattle are handled outside the corrals, and the initial interaction with the animals can set the stage for the way the rest of the handling. “I always want cattle to flow past me,” said Gill. “If I put too much pressure on them, they’ll come out faster than if I go behind them.” While Gill isn’t against the use of sorting sticks during handling, he urged producers to be aware of what they’re doing with the stick.

The draw created by one animal’s movement in front of another is key to creating flow. “Most of the issues we see with flow in working facilities is in the back, right where cows come into the chute,” said Gill. “As one animal leaves, the next animal should be able to see it leaving and will be more willing to move forward.”

Gill walks slowly but deliberately among a group of cattle, and as he moves, he’s quietly guiding the animals through his body position and movements. “I want them to stay within my sight, but I have to be in the right spot,” he said. “It isn’t as much about driving cattle – we’re gathering them. If you’re pushing, it’s like pushing a wet rope.” Gill added that his voice doesn’t have any effect on the cattle unless he’s directly yelling at them, so he remains low-key and patient throughout the handling exercise.

Although most cattle handlers concentrate on moving the animal’s entire body, Gill said far less effort is required. “The front four inches of cow is all you have to worry about,” he said. “The rest of the body goes where the front four inches goes. The cow goes where the nose goes, and our job is to get the nose right so the rest of the body goes with it.” Gill added that handlers should always be aware of their own position and not end up ahead of the cattle.

“They have a natural desire to see where I am,” said Gill. “With pressure, they’ll walk around. They walk off and turn. It changes their direction, and we can use that to our advantage. It’s all about pressure and release – we have to know when to apply it, how much to apply and when to remove it.”

Many handling facilities are constructed with circular gathering areas, or tubs. If the pen has angles and the animal moves into a corner, the handler’s tendency is to get closer to force animals to move out. Gill said the better option is to release pressure by backing off. “The more pressure, the more it reinforces that that’s the thing they should be doing because there is no release of pressure,” he said. “The best thing to do is back off and draw their attention out of the corner rather than force their head further into the corner.”

Gill said cattle handlers have created monsters that don’t exist. “We don’t want cattle to react,” he said. “We want them to reason their way through something. If they’re reacting, it may or may not be the way we want them to. If they overreact, people get hurt and cattle get hurt.”

If cattle stop at a certain point in the system, there’s a reason. “It’s either you, the facility or both,” said Gill. “The facility won’t create the situation, but it may aggravate it. We create the situation.” Gill emphasized his point by adding that cattle don’t stop in the middle of the pasture because they don’t know how to go anywhere – humans are doing something that stops the movement.

“We’re busy in the working pens, and trying to make everything happen at one time,” he said. “If everyone is putting pressure on, the cattle don’t know who to respond to and they start reacting. We have to be able to pass pressure from one person to another in a working facility.”

If cattle aren’t flowing, Gill said it isn’t their fault. “It’s us,” he said. “Don’t blame the cattle. If they aren’t working right, we aren’t doing it right. It’s all about figuring out where to make adjustments to improve flow. Cattle are just waiting for us to figure it out. As soon as we get right, they’ll do what we ask.”