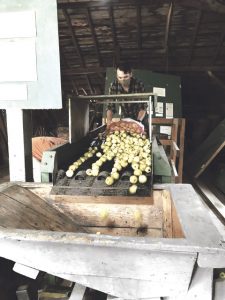 Autumn is a favorite time of the year, with its abundance of garden fruits and vegetables, cool nights, warm sunny days and crisp blue skies against the backdrop of colorful fall foliage. The garden is producing like crazy and we are busy harvesting its bounty, canning and storing in the cool basement for the long winter to come. Added to our enjoyment of autumn is the tradition of pressing apples for cider, and we worked diligently to pick and fill bushel bags and baskets of the red and yellow fruits to bring to the cider mill with the anticipation of the gallons of sweet cider we’ll return home with.

For many years we have brought our apples up to historic Hubbell’s Mills, located at the Hubbell Family Farm in Delaware County, just past Margaretville, NY. The Hubbell family ancestors, a Dutch family named Dumond, farmed in the Catskills since 1763, and eventually moved in 1848 to the land where Hubbell Farm is located today. The family-owned and operated farm is now a nationally registered historic landmark, with a number of unique buildings including the 1870s cider mill and sap house, both still operating. They sell a range of seasonal products including naturally-raised Highlander beef and Berkshire pork, maple syrup, honey, eggs, fruits, vegetables and apple cider, all grown and produced in the Catskills.

Cider time is a busy time, and the Hubbells press on Saturdays beginning in mid-September. We reached our destination, drove up the hill and entered the ancient three-story weathered barn that housed the cider mill, where we were greeted by Burr Hubbell, who hosts the cider pressing operation. The entire family helps out, and it’s always fun to see the “new additions” to the family over the years. Now the sixth generation to be pressing the cider, there were members of the seventh and even eighth generation present.

Burr explained that the cider mill and sawmill were originally powered by a steam engine that was purchased in 1881. It was replaced in 1918 by the Fairbanks-Morse type Z engine that’s in use today. A sign posted on the barn wall states “This single-cylinder gasoline engine makes a distinctive ‘put put’ sound which tells the whole farm that it’s cider season again.” Another sign describes how the incredible engine, in use for more than 100 years, operates: “The Fairbanks-Morse engine is attached by a series of belts, shafts and wheels to the apple conveyors, the apple grinder, the cider press and the sawmill. Since the engine runs at one speed, wheels of different sizes are used to adjust the power output of the engine to meet the needs of the equipment.”

When the mill first started operating in the 1800s, it was designed to run commercially; on weekends during autumn the road would be lined with horse-drawn wagons filled with apples. Burr reminisced that when he was growing up, all the dairy farmers would show up on pressing days with their pickup trucks lining the road. Every dairy farm had apple trees, and they would fill their feed bags with apples and bring their milk cans and barrels to store the cider. 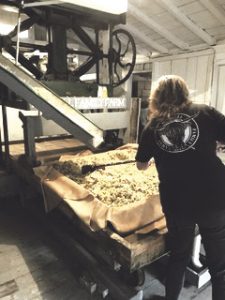 We started the cider pressing process by dumping our apples into the washer, which sprays and brushes the apples. They drop into the elevator, which lifts them into the hopper above the grinder. As the apples are ground, they drop onto the conveyor that passes down to the press room, a story below, where they fall onto a cloth-lined wooden form that sits on the rack. The ground apples are leveled off with wooden rakes. Once the cloth is full, the four corners are folded in toward the center, like an envelope. We had enough apples to require another cloth atop the wooden rack as more ground apples came down the chute. After leveling these, several heavy, dense maple boards and blocks were placed over the cloth, and the press was started – a huge contraption that creates up to 150 tons of pressure. It was fascinating to watch and hear the wheels, gears and pulleys working to extract the juice. The press can handle up to eight cloths of apples at a time, yielding more than 100 gallons of cider from one pressing.

Soon the cider began to stream out through a white pipe under the press, and we sampled Dixie cups of the delicious amber-colored juice. Another chute conveyed it down a third story into the large collecting vat, where it was siphoned off into the containers that were filled with a gravity-operated nozzle. Our containers were not filled completely to allow for expansion, as they are stored in the freezer.

During the long, cold winter there’s nothing like sweet, delicious cider made from your own apples to remind you of those crisp clear days and the wonders of autumn.