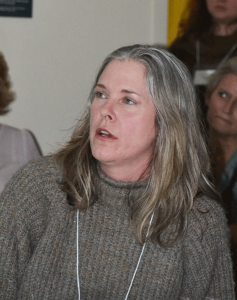 MARKSBORO, NJ – Some Warren County farmers are growing artisanal grain and arranging to control the processing themselves.

Warren County was once known for its dairy farms and is still one of the most agricultural counties in New Jersey, but it is not known for its grains.

As the market for heritage and organic grain is increasing, so is the need for local mills.

Ruthie Perretti isn’t exactly a farmer, although she spent childhood summers in rural Frelinghuysen Township, on land she still owns. She runs a restaurant in Montclair where she serves organic foods and artisan breads.

Perretti met folks at nearby Genesis Farm, an ecological learning center founded in the 1980s by an order of Dominican nuns. An organic CSA now operates on the farm. Perretti met Sr. Miriam MacGillis one of the original nuns who is still involved in Genesis Farm, and through Sr. Miriam, she met Elizabeth Dyck of Crimson and Clover Farm in Florence, MA, who is at the forefront of the organic grain movement.

She is planting spring wheat on her parcel in northern Warren County, near the Paulinskill River, Perretti said, and is looking to possibly open a mill in a former tractor repair shop.

That would suit Kent Kimball, a farmer in White Township, farther south in Warren County.

Kimball has an organic vegetable farm and started with grains in 2016 after meeting Dyck.

“She came out to the farm and said we had potential for grains,” Kimball said.

He planted warthog wheat and rye, but a number of factors conspired to make for a less-than-perfect harvest in 2017.

“It was a ‘cart-before-the-horse’ project,” he admitted.

He has now had two successful harvests. He sells the wheat berries at farmers markets and has a small but loyal customer base. Some people buy it and mill it themselves, including bakers, he said.

Kimball doesn’t have the storage capacity to mill what he harvests and keep it for sale, so he is watching the Marksboro project closely.

Perretti brought her plan to the Warren County Economic Development Committee and introduced the committee to her millers, Laurence Mahmarian and Len Bussanich of River Valley Community Grains.

“I want people to eat gluten again,” she told the EDC. “People are intolerant to gluten because of the way we’re processing it.”

She said there is a market for organic grains in Montclair where many of the bakers and restauranteurs are not familiar with the farming community in northwest New Jersey.

Mahamarian and Bussanich, along with a third partner, Mike Hozer, established River Valley Community Grains after MacGillis told them farmers and millers in the northeast couldn’t keep up with the demand from both professional and home bakers for organic flour from local sources. They tried with Hampton Junction in Hampton Borough and Harper’s Bagel and Bake Shop in Hackettstown. Both businesses were happy with the flour, but the process was time consuming because River Valley didn’t have a mill of its own. They have since set up shop in Red Barn Kitchen in Long Valley and are looking for a permanent home.

At the commission meeting, Perretti explained she already approached the Frelinghuysen Township Planning Board with a conceptual plan and got a good response. There is a warehouse and several outbuildings on the site and an environmental review would be necessary, as well as a use variance.

Erin Collins, program supervisor of agriculture and horticulture at Sussex County Community College, said at a recent Foodshed Alliance meeting she would like to use a parcel of that group’s Sustainable Agriculture Enterprise land in Andover Township for grains.

She said her program works closely with the school’s culinary department. Her students will start their parcel of SAgE land in vegetables and cover crops, but the culinary program is interested in grain for its bakery. The students there want to use artisanal grain for pastry and bread.

Chris Maier, a member of the EDC who has a farm in Hope, said he lost two millers he used for his wheat because of high electricity costs. He now hooks a grinder up to one of his tractors, he added.

Corey Tierney, director of land preservation for Warren County, said the county is in discussion with the Foodshed Alliance to use a field at the White Lake County Park for wheat. The FA is involved with Perretti in planning the mill in Marksboro as well as with the land lease program in Andover.

Already involved with River Valley Community Grains at their current location at Red Barn Kitchen is Steve Gambino of Villa Millagro Vineyards in Pohatcong Township, at the southern tip of Warren County.

Gambino said he first planted traditional grains on five acres at the winery in 2016. He is planning on having River Valley mill his wheat this year if they can handle the capacity. In the past he has milled it elsewhere and sold it to River Valley for distribution, he said.