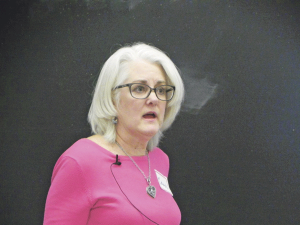 By way of introduction, Przewonzy said she is a special education teacher and still works full-time at that. Her husband was raised on a farm and has been farming, part-time and full-time, all his life. She was part of the inaugural Annie’s Project series of classes held in 2010. The program is designed for women farmers and women considering farming as a second career.

“I’ve come a long way since then,” Przewonzy said, noting she and her husband now have a thoroughly detailed, working, practical, realistic business plan for their small livestock farm in northwest New Jersey.

“A business plan lets you look at your goals, what you’re doing currently, what you plan to do in the future and how you’re going to get there,” she said, “it’s really a road map, and any time you take a trip there are so many detours, you can decide are you going to turn right or turn left. That’s the great thing about a business plan, it’s not set in stone. Just because you’ve put it down doesn’t mean you can’t deviate from it.”

Przewonzy admitted she knew nothing about farming when she and her husband started their business in 1996.

“Because my husband had been farming all his life, we bought a farm and we started farming,” she recalled. B&B Livestock Farm wasn’t making any money and both partners were working full-time off the farm.

After five years and repeated annual visits to their accountant, suddenly it was less of a minus in the balance books and finally, they broke even on their operation. After that, they began turning a profit. A good business plan, she explained, will answer many different things for you and keep you focused on your profit and service goals.

A good plan “is answering why do you exist or the purpose of your farm or what you’re going to be doing, is it a business or a hobby? For us it was a hobby for the longest time, but that was not true, we thought it was a business. What are your goals, present and future? What’s the financial impact of the farm? Whatever it is you’re doing, what’s the financial impact for you, are you going to be able to survive, or will it bleed you [and your finances] to death?” she asked.

You’ll also want to set down in writing how and why your products and services are different from others. She acknowledged, initially, B&B Livestock Farm wasn’t all that different from other small farms in northwest New Jersey. They were selling eggs, pork, beef and chickens.

“We worked hard at it, but were we standing out from anybody? No, we blended in with everybody,” Przewonzy admitted. Over time, they began to differentiate.

“We never discussed pitfalls, and I just kept writing the checks,” she said. She and her husband turned B&B Livestock Farm into an LLC and took a hard look at feed and equipment costs and considered additional employees.

“Initially it was me, my husband and the son who still lived at home, but once he moved off to Jersey City, we found ourselves saying, ‘Can you come home and help us do the turkeys? Can you come home for a weekend?’ ”

The couple’s accountant urged them to form an LLC, yet she cautioned, “Getting opinions from more than one professional should all be part of the business plan.”

Writing down short-term and long-term goals should also be part of the business plan.

“It could be a month, could be six months or one year, just because you see the words short-term and long-term, you don’t have to project 20 years from now, because nobody knows that far out, your road map is going to change so drastically,” she said.

“When reality hits and the bills start coming in, you’ll think maybe I should have written some of these goals down,” she argued. “Am I going towards the goal? Am I on my right road map?” You have to look for anticipated financial impacts, she said, noting if you’re going to any bank for financing, they’re going to ask about a business plan. “Fortunately, that’s just about when Annie’s Project came into my world.”

“We didn’t have a plan and the farm was just costing us money, and it might sound hokey, but Annie’s Project actually put us on the right path” she said. “The husband actually listened to me when I said, ‘Look we did this in class, this is what we need, this what we’ll do.’”

By writing a detailed business plan for B&B Livestock Farm, the couple began to turn their farm around to the point — after depositing so many checks — where the bank told them they needed to open a separate checking account for the farm’s operations.

“The husband kept saying, ‘Can I buy a tractor?’ I said no, and then he’d ask for something else and I’d say ‘Not this month.’ Writing a business plan made such a difference. I honestly didn’t think so, I like to think I’m an intelligent woman and I could run a business. Now, the accountant is like ‘What did you do? How did you change things around?’ A business plan with some goals gave us a direction, and it also gave me the ability to say yes or no.”

She acknowledged her B&B Livestock Farm is too small to be able to compete with the big beef and pork operations yet too big just to be in the neighborhood.

“You really have to think about your market and what you’re doing and how many people you’re going to be able to service, and what and who your clientele is going to be. There are so many steps to writing a business plan, it took me a long time to write it. It’s not easy, but if you just tackle each step a little at a time, it’s a beautiful thing and it will get you to your final destination,” Przewonzy stated. She credited the detailed questionnaire that is handed out to Annie’s Project participants with helping her and her husband to formulate their flexible business plan and get on the road to profitability for all their early morning, evening and weekend hours spent working on the farm.

“They ask you the questions and then you can start filling in the information,” Przewonzy explained.

“I had to look at each component of the farm and then break it down. It forces you to focus on one area at a time.”

For more information on next year’s Annie’s Project series of classes, six sessions filled with academic and successful farmer guest speakers, held at Rutgers in New Brunswick but accessible via the internet, visit: http://farmmgmt.rutgers.edu