And the winner is Katelyn Poitras 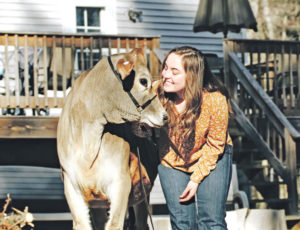 Katelyn Poitras has been working with Jerseys since 2008, when she was four years old. Now a junior at Tantasqua Regional High School in Fiskdale, MA, and currently 17, she claimed the title of Massachusetts State Jersey Princess on March 6.

Poitras bred and raised her Jersey Hi-Poits Colton Teresa, who was born in September 2018. Teresa was bred in November 2019 and calved in August 2020. Teresa won First Milking Yearling and Reserve Intermediate Champion in the Junior Show at the 2020 Northeast All Breeds Fall Show in West Springfield, MA, at the Eastern States Exposition Center in October 2020. She also bred and owns third generation Hi-Poits Gentry Mudslide, who won the Summer Yearling Class and was nominated Junior All American Summer Yearling 2020.

Because of COVID, there was no audience, and contestants did not have to wear masks while showing in the ring, but were expected to wear their masks outside the ring at all times.

“The All American is a contest put on by Cowsmopolitan Dairy Magazine and is an accumulation of animals from all over the U.S.,” said Poitras.  The owner/handler submits their animal along with their placings from shows throughout the year and a panel of judges selects the top three from each category. When the results for the 2020 Junior All American Contest were announced on Feb. 16, 2021, Poitras’s yearling Jersey Hi-Poits Colton Teresa had won Honorable Mention All American Milking Yearling.

And that’s not all. Poitras was also chosen to be one of 31 youth from 15 states across the country selected to attend the seventh Jersey Youth Academy that occurs July 11 – 16 in Columbus, Ohio.

She and her family raise only heifers at their home in Brimfield, MA, a family devoted to Jerseys. Her mother, Moira Poitras, assists her with choosing the sires for her dams through their business, Poitras Jerseys and Sire Services. Her grandfather, Jack Tierney, raises beef cattle in Malone, NY, at Tierney Farm Jerseys, which is now managed by her aunt Jennifer Bosley. Her grandfather and aunt have both been instrumental in guiding her. Her sister Madelyn, 9, is following in her footsteps, raising Jersey calves of her own.

Once the cows have been shown and competed, they go on to two farms to be part of dairy herds. Four of their cows, including Teresa, are housed at Cadillac Farms in New Hampshire, part of that farm’s 325 dairy herd run by Pete Hawkes Jr.

They house another four cows at Smyth’s Trinity Dairy Farm in Enfield, CT, that has a herd of 30 and bottles their own milk. “They do the daily care for them because we don’t have the facilities to house them. We have six acres, but most of it is swampland,” said Poitras.

She bought her first calf at the Blue Ribbon Sale held in March at the Eastern States Exposition Center in 2008. Her name was Country-Ayre Comerica Candy. “She won a blue ribbon at the Mass State Show,” said Poitras. The show took place in August 2008 at the Franklin Country Fairground in Greenfield, MA, and was Poitras’s first show. Her calf went on to become a Junior Champion at the 2009 Mass State Show.

“I like to see how much they’ve changed from a baby calf to a cow and competing with them,” she said.

“I look up to my aunt a lot for showmanship. She has been a big role model. She shows at all the county fairs to the national shows, from the All American Jersey Show to the Royal Agricultural Winter Agricultural Show in Canada,” said Poitras.

“I’m excited to be going to the academy. Many of my friends that I have made from showing will be there. This will be an opportunity to meet new people and learn more about the Jersey breed.”