Anatomy of a compost pile 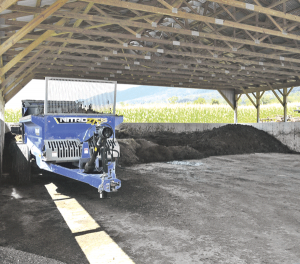 Compost enriches soil, helps retain moisture and reduces the need for synthetic fertilizers. It also supports the growth of beneficial fungi and bacteria that break down organic matter. On-farm composting can provide a ready-to-use source of organic matter to enrich soil and feed crops.

Chryseis Modderman, manure management Extension educator at the University of Minnesota, explained that successful composting involves more than simply accumulating manure and waiting for it to break down. “Aged manure is not composted manure,” she said. “Proper composting is almost an art, and it takes the right combination of particle size, moisture content, oxygen, temperature and carbon-to-nitrogen ratio to work efficiently.”

The microbes that exist in manure are the reason composting works. Microbes break down organic matter, but require certain conditions to be successful. Modderman said that while well-managed compost requires four to six months to reach completion, compost can reach maturity in as few as two months if it’s turned, aerated and managed properly. Providing microbes with the best working conditions results in a faster process.

The size of a compost pile is determined by the size and needs of the operation. Some farms maintain one large pile; others keep several smaller piles in various stages of decomposition. Modderman said a compost pile should be, at minimum, three feet tall by three feet deep. “Anything smaller than that won’t be able to generate the internal heat necessary for composting,” she said. “The maximum size should not exceed what your machinery cannot effectively turn and mix.”

Particle size is the key to efficient microbial activity. More surface area allows microbes better access to degrade the material. But if particles are too small, they’ll be too close together and limit the amount of oxygen in the pile. Particle size of around an eighth of an inch to two inches is considered best, said Modderman. Manure is crumbly and can be broken into bits of that size, but coarse bedding such as corn stalks may need to be shredded.

The three temperature phases in composting are warmup, hot composting (thermophilic) and cool curing. “The first stage, warmup, is the shortest, only lasting for a few days to a month,” Modderman said. “It occurs from the time the pile is formed until the initial temperature reaches 105º Fahrenheit. During this time, the microbes that already exist in manure start to become active and start the break down process.”

During hot composting, microbes do the work. This stage lasts between four to six months and should take place with temperatures between 110º – 150º F. Modderman said maintaining the pile in this temperature range is crucial because it’s the optimum environment for microbial activity. If the temperature of the pile falls below 110º, microbes become dormant and decomposition slows or stops. Low temperature during the hot composting stage may indicate that other key components such as moisture content, carbon-to-nitrogen (C:N) ratio or oxygen levels are off.

Cold curing, the final phase, can last up to four months. During this stage, the compost pile returns to lower temperatures, usually below 105º. Further decomposition is aided by fungi, worms, insects and other organisms. “In some cases, this step can be skipped if the compost is used as a nutrient source directly after the hot composting phase is complete,” said Modderman. “But compost that’s allowed to cure will be a more stable and more complete product.”

For best results, monitor heat throughout all three temperature stages. “The amount of heat in a compost pile is a good indicator of how well the process is progressing,” she said. “Temperatures that seem off are the first indicator of a problem.”

To check for moisture, Modderman suggested a simple squeeze test: pick up some compost with a gloved hand and squeeze it. Compost at the ideal moisture level will hold its shape and doesn’t drip water or crumble when squeezed. If compost is too moist, covering it with a tarp or a roof prevents excess moisture from rainfall and affords more control over the process.

“Aerobic conditions are necessary for composting,” said Modderman. “The need for high oxygen levels is greatest at the beginning of the composting process. A minimum of 5% oxygen in pore spaces is necessary – 10% to 15% is optimum.” Oxygen is most abundant in the outer layers of the pile, and the compressed inner core of the pile will contain the least pore space and the least oxygen. The process of turning and mixing allows oxygen to enter all areas of the pile.

Another important aspect of composting manure is the C:N ratio. Any imbalance can impede the process. The carbon source is most often from bedding material, and nitrogen is provided by both manure and bedding. “The optimal range for composting is between 25:1 and 30:1,” said Modderman. “If the pile isn’t breaking down as it should and you’ve ruled out other culprits such as moisture or temperature, you may benefit by sending the sample to a manure laboratory to test for C:N ratio.”

Compost made in organic systems under USDA’s National Organic Program (NOP) must meet certain standards, which can be found at omri.org/compost-standards.