An outpouring of community support 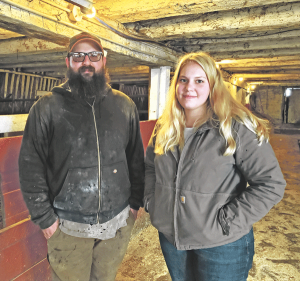 Ben and Mary Brown started milking cows on the farm that had been in Ben’s family since the late 1700s. When Ben’s parents were managing the herd, milk was shipped to a co-op and the income supported the family of six.

The milking herd at the Browns’ Whoa Nellie Farm in Acme, PA, includes 70 Holsteins and Jerseys, with young stock and dry cows bringing the total herd size to about 200. Cows are housed in a freestall barn, and with the help of NRCS, they created 15 paddocks for rotational grazing. Cows also receive a homegrown silage-based TMR. In addition to growing crops, Ben makes hay for both the farm and for sale.

When the couple took over the 500-acre farm in 2016, they realized the model that worked for Ben’s parents wouldn’t support their family. “We knew within a couple months of taking over in 2016 that if we didn’t do something different, we would no longer be farming,” said Mary.

Ben came up with the idea of bottling milk on the farm. The farm’s location in the rural Laurel Highlands, where people come year-round for recreation, would be ideal for attracting customers. The decision would add to their debt, but they were willing to take the risk. Although some milk was still shipped to the co-op, Whoa Nellie’s bottled creamline milk soon became popular among customers. But the Browns had no idea their decision to bottle milk would draw national attention.

The COVID-19 situation led to the unfortunate reality of some dairy farmers having to dump milk. Mary said they were notified by their co-op on a Monday that they’d have to dump what would’ve been picked up the following Wednesday and Friday. Although it was devastating news, the Browns quickly came up with a plan.

“My husband and I were already on the same page,” said Mary. “We thought it would be a terrible waste. I’d rather work with churches or food banks than waste milk, and that’s what generated this whole thing. I put it on Facebook that we would work 24 hours (to pasteurize all the milk) to avoid dumping it.”

Consumers wanted to help by purchasing milk directly from farmers, and those familiar with Whoa Nellie Farm spread the word. Images of cars lined up for miles to purchase fresh milk from the farm made national news.

With only a 30-gallon pasteurizer, the Browns had little choice but to bottle milk around the clock to meet the almost instant demand for creamline milk. “We didn’t know how it would go,” said Mary, who didn’t yet realize the degree of publicity the farm had received. “People came for milk because they didn’t want to see milk being dumped.”

Many in the general public and media somehow got the idea that purchasing milk directly from the farm was the solution to dumping for all farmers, but Mary said they didn’t realize it was close to impossible to do without already having the equipment and licensing. “If we were just shipping, we would have had to dump it,” she said. “There would’ve been nothing else to do.”

The Browns saw immediate community support for their efforts. As people gathered by the hundreds to purchase milk, Mary walked down the lines of waiting cars and learned that many were there simply because they didn’t want to see milk being wasted.

“We also got to work with several groups that are giving out food, and they bought milk to go with it,” said Mary. “Then we partnered with a ministry, and they’re sending 40 to 50 gallons of milk each week to go with the food boxes. The mayor held a fundraiser to purchase milk for the food boxes, and we worked with them on the price. The city wrote us a check, and we have enough funding to go for months.”

Another positive that came from a negative situation is Whoa Nellie’s pay-it-forward program. Through the program, customers can purchase a gallon of milk for themselves and an extra gallon for someone in need. “One customer did that,” said Mary, explaining the start of the program. “He said ‘You know your customers. Give it to someone who needs it.’ We didn’t know what to do, so we added two pounds of our beef, then asked who needed it on Facebook. It just kind of snowballed from there.”

At one point, part of the business plan included cheesemaking, but Mary’s cancer diagnosis in 2017 squelched that idea. Although she had already learned to make cheese, Mary was told she shouldn’t do it, nor could she milk cows or do anything else physical. The Browns hired Reagan Pensenstadler to take over Mary’s work on the farm, while Mary concentrated on stocking the farm store’s shelves with products from other local producers including cheese, maple syrup, honey, salsa, flour and cornmeal. Mary also handles the farm’s social media, which she said is an important aspect of how they do business. 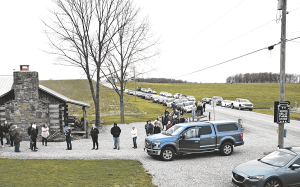 A herd of 40 Angus cattle, also on pasture, provide year-round beef for the Whoa Nellie Farm store. Mary said the beef is popular among customers, and when cuts from a recently processed steer hit the shelves, it sells out in one day.

Since people were already coming to the farm, the Browns added a corn maze in autumn 2017. Mary said many corn maze visitors become customers who purchase farm products. “Last year’s corn maze went from year two to year seven growth,” she said. “We really exploded. We built another building, bought another wagon for hayrides and we’re preparing the parking area for this fall.”