‘All things Arruda’ farmed in the Ocean State 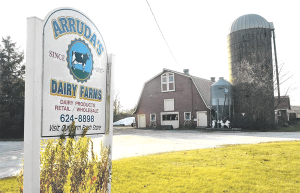 Farming is very often a family business, with one generation fostering and passing the torch off to the next. For Tony Moniz Jr. this is doubly so. The scion of two royal houses of the Rhode Island dairy community, he seemed destined to follow in the footsteps of both his mother’s and father’s families.

“My grandfather founded Arruda’s Dairy in 1917,” Tony explained. “It then passed to my mother Jean. So my brother Joe and I are third generation dairymen on our mother’s side. Our father, Tony Sr., first opened Moniz Dairy in 1958… We now run that dairy as well. It’s all about family.”

And that family is more involved than ever. Tony serves as the inventory chief and brother Joe is chief herdsman. Matriarch Jean, the youngest of 12 children herself, still works the land at Arruda’s. “My mother still hops on the corn truck several times a week,” Joe laughed. “She keeps busy. Also, three of my nieces work at the farm, and my brother’s wife Anita takes care of the young stock of calves.”

All that family participation is a necessity, as Arruda’s has been growing its business and expanding its distribution at an impressive rate. All told, Arruda’s maintains a staff of about 25 workers.

“We have our products selling all the way from the top of Cape Cod on down to Providence. And we now employ four full-time delivery drivers who take our products all over southeastern Massachusetts – a lot of small Mom & Pop stores south of Boston and east of Worcester,” Tony said.

In order to keep up with the demands of this distribution, Arruda’s keeps a herd of 130 cows, and the partner Moniz farm has 275. Tony said, “We keep the herds separate, but they do share a single milking parlor.”

Describing the variety of their offerings, he added, “We now feature whole, 2%, 1%, skim, vanilla and strawberry milk. We also have a coffee milk – milk infused with coffee and sugar. It’s hands down one of our most popular products.” In fact, Arruda’s actually hosts a weekly “Coffee Milk Night” every Friday when customers can come to the dairy and sample the best seller. Customers can also purchase all things Arruda at the dairy’s on-site retail shop, Arruda’s Dairy Store. According to Tony, it has an old general store feel to it.

The offerings are not limited to dairy products, however. After a quick visit to Arruda’s Red Barn Beef shop, customers can take home a cut of Arruda’s homegrown cuts of beef. The beef shop features “Red Barn Beef’s Meat of the Week,” with featured selections ranging from beef tenderloin steak to filet mignon.

Committed to a more organic style farming, Arruda’s Dairy refrains from the common use of BST. “We don’t use it,” said Tony. “We are a feed-based farm, and we’ll stay that way.”

As Arruda’s toils through its busy season, it is also prepping for the work yet to come.

“Once we’re through the summer season, we’ll be getting ready to start production on a new line of eggnog. Every generation has its own spin on it. My grandfather’s eggnog was, I think, almost sickeningly sweet. My mother’s recipe cut out a lot of the sugar. My own version has a spicier flavor to it – more nutmeg. I’ve also got some vanilla bean in there.”