All in due time 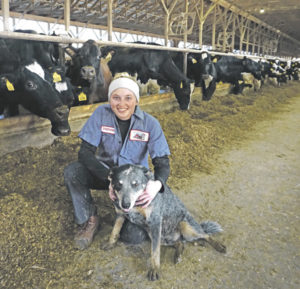 Stephanie Finn knew she wanted to return to her family’s dairy farm in after attending Cornell, where she obtained a degree in dairy science with a minor in ag business, graduating in May 2018. Stephanie’s brother Nicholas was just ahead of her with the same degree, graduating in December 2017. Both returned to the farm upon graduation.

“My grandfather started the farm in 1964, milking around 30 cows,” said Stephanie. “Then my father Travis and his brother returned to the farm after they graduated in 1991, and grew the farm to what it is now.”

But Finndale Farms, in Holland Patent, NY, is quite different today from when Stephanie was growing up. Her father was managing the farm when the mantra of the day was “continue to grow.” At one point, the family renovated the existing tie-stall barn into a flat barn milking parlor. They took out a loan to build the first free-stall barn and walked all the cows from the free-stall barn to the flat barn for milking as they paid off the loan.

Instead of trying to find her place in her family’s rapidly expanding operation, 10-year old Stephanie learned to milk cows at a neighboring dairy farm where there were 30 cows in a tie-stall barn. She recalled it as a good learning experience that helped provide perspective on the vast variety in the dairy industry.

Stephanie said that while she and Nicholas were in college, her father didn’t hire anyone to fill the spots they would eventually fill. “He has always made it very appealing for Nicholas and I to come home,” said Stephanie. “We love working together.” Nicholas manages crops and equipment, Stephanie’s mom Debbie handles HR and financials and her grandfather Harry is a valuable asset for seasonal field work.

Today, Stephanie is the herdsman for Finndale Farms. She manages a herd of 970 cows and 700 replacement heifers. Cows are milked three times a day in a double-20 parallel parlor, which isn’t quite up to its maximum capacity of 1,200 cows. The herd is comprised of mostly Holsteins, with about 80 Jerseys. Stephanie said the Jerseys are the result of one Jersey she had when showing cattle as a youth, and although the smaller cattle don’t fit the larger facilities designed for Holsteins, she appreciates their contribution to higher components.

Stephanie handles all the breeding for the herd, using genomic testing, young sires and some beef sires. She said her father grew up in a time when dairies were encouraged to continually expand – for more income, farmers added cows – but it’s different now. “Volume isn’t always what’s best,” she said. “We look at ‘how can we make the numbers we currently have better?’ with quality over quantity.”

Angus semen is used to breed cows that are difficult to settle. Stephanie determines which cows to breed to beef by number of services, and has found that conception rates with Angus semen are excellent. “But my dad always preached ‘if you’re breeding cows that aren’t very fertile, you’re going to end up with young stock that aren’t very fertile,’” she said. “I might want to keep a cow in the herd because she’s a great producer, but I don’t necessarily want young stock out of her.”

Like other dairy farmers, Stephanie said dealing with the changes in the milk market have been challenging, but those challenges have forced them to become better. “We aren’t focusing on just adding cows, so what can we improve?” she said. “How can we use genetics to make animals that will have higher 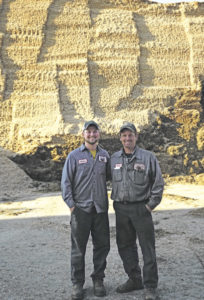 With limited space on the farm, Stephanie said young replacements move through the system quickly. After initial colostrum feeding, calves are raised in individual pens and receive milk replacer twice a day. “We renovated my grandfather’s first tie-stall barn into a transition barn for the younger heifers before they move to the heifer barn,” said Stephanie. “That’s been a good gradual step up. Before, they were moving from the calf barn to large groups of heifers.”

Calves first move to the transition barn in groups of five. “We have a training pen where they learn how to live in stalls,” she said. “They’re introduced to the TMR, then moved into groups of 40.” The result is less competition for feed and resting space, and heifers that require more attention don’t struggle.

With limited space, it’s important to grow young replacements as efficiently as possible. “They’re moving through our system so quickly,” said Stephanie. “Our age at first calving is 21 months. Since the facilities make it impractical to use AI on young heifers, we use bulls to breed them.” (She would like to eventually use AI on heifers to take full advantage of genetic improvement.)

The Finns are currently expanding pit storage at the home farm with the addition of a 4 million-gallon pit that should provide six months’ storage. “We’re excited to have more wiggle room,” said Stephanie. “Right now we’re spreading every six weeks.”

Cow comfort is enhanced with waterbeds bedded with sawdust. “We had waterbeds in our close-up dry cow area for a long time,” said Stephanie. “We put those in quite a while ago. My dad thought we should have waterbeds in the main facility, so two years ago, we took the mattresses out of half the older free-stall barn and put waterbeds in. We’re going to replace the rest of the plain beds with waterbeds.” Stephanie has seen increased cow comfort and more lying time on waterbeds, and said hocks are in much better shape. To enhance cleanliness, the ends of the beds are scraped and hydrated lime is put down when cows are out for milking.

Stephanie recalled an important maxim she learned at Cornell – the concept of being in balance. “The facilities, manure storage and feed space with a certain number of cows can be in balance, but as soon as you improve one facet of that, everything else has to change,” she said. “We’re a little on the unbalanced side right now because we need more facilities, more manure storage and feed storage, but all in due time.”