Aiming for a career with cattle 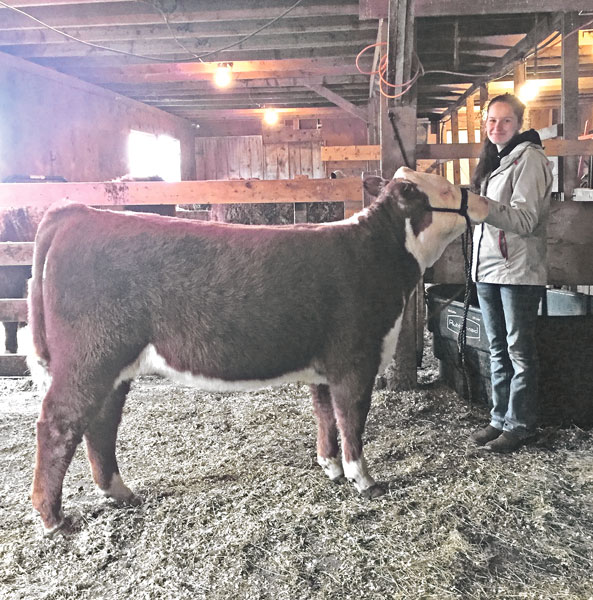 The West Bridgewater, MA, farm where Ashlee DeMolles and her family raise Hereford cattle has been in the family for more than 100 years. Like many New England farms, it started as a dairy farm, then Ashlee’s grandfather sold the cows and started a commercial beef herd.

Today, Shadi Oak Farm is home to a select herd of Hereford cattle along with some Simmentals. Ashlee can’t remember a time she wasn’t involved with cattle. “I started showing cattle when I was five,” she said. “It was mostly at small county fairs because 4-H Cloverbuds can show at five years old. But I was always at shows because my mom was showing.” Although Ashlee’s 4-H club focused more on general projects, she participated in livestock judging when she had the opportunity.

Shadi Oak Farm is primarily a cow/calf operation with 50 brood cows. The farm also feeds out a group of homebred animals for their on-farm meat stand, which opened this past January. “We’ve always sold halves or whole beef animals,” said Ashlee. “But people would stop and ask if we had meat for sale, so we decided to open the Shadi Oak Meat Shack. We have all beef cuts available, along with pork and pork products like bacon and sausage.” Ashlee said the first pork products were from purchased pigs finished on the farm, but the family has since farrowed their own pigs to finish.

Ashlee said the timing for opening the Meat Shack was good – it was during the height of the pandemic when people were seeking locally raised meat. Selling meat directly also gives the DeMolles family an opportunity to explain how beeves are raised. “We’re in an area where people don’t know about ag,” said Ashlee. “People ask if it’s organic, and we explain that it’s farm-fresh and that if an animal is sick, we have to treat them. The animals are all grass-fed and grain finished, and people like the meat.”

Selling meat directly from the farm via the Meat Shack requires a steady supply of feeder calves, so calving season isn’t limited to spring or autumn. “For the market, we try to stagger cows’ breedings as much as possible so we can send two animals for processing each month. That’s 24 steers each year, so if we want them ready throughout the year, breeding has to be staggered.” For the registered Herefords, Ashlee prefers a more defined breeding season that results in fall and winter calves. “They can be shown for two years if they’re born at the right time,” she said.

After cows are bred via AI, a cleanup bull goes in with the herd. “My mom and I do the genetics,” said Ashlee. “It’s fun to pick and choose bulls and see the outcome.” In discussing progress in the cattle industry, Ashlee has seen changes in cattle type. Until more recently, Herefords were bred for extreme height and length, but breeders are now starting to select animals with more moderate frame size. As for breeding animals, Ashlee said winning shows with a good heifer is always desirable, but the animal has to eventually be able to go out on pasture and raise a calf.

Ashlee discussed changes in other breeds, including Angus, noting that Hereford and Angus registries remain closed – crossbreds can’t be registered. “I like that they’re still closed,” she said. “They definitely stick with the breed characteristics. I was a delegate at this year’s Junior National Hereford Expo – we talked with a lot of kids from across the country and asked candidates for the board what they thought about a closed book association. They didn’t think that would change.”

Ashlee and her sister each exhibited Hereford heifers at the Keystone International Livestock Expo held recently in Harrisburg, PA. “They’re from different genetics, but both have a more moderate frame size and are deeper bodied,” she said.

As she approached the end of her high school years, Ashlee applied to quite a few universities with strong ag programs. When it came to narrowing down her choices, Nebraska, Kansas and Iowa were at the top of her list. “There was just something about Iowa State,” said Ashlee. “The people are so nice and there are a lot of programs for agriculture in general.” As a freshman animal science major, Ashlee has already started degree-specific courses.

“I’m in AnSci 101,” said Ashlee. “It’s hands-on, working with animals. Coming from a farm background, I already knew pretty much, but it’s always good to refresh the fundamentals.” It didn’t take long for Ashlee to see that there’s a lot of difference between raising cattle in Massachusetts and Iowa, and found it somewhat intimidating to enter an ag school coming from an area where she was among just a few who were involved in agriculture. But Ashlee has met classmates who didn’t grow up on farms and has been happy to offer some friendly insights about what she’s learned about livestock.

This past year, Ashlee became a Junior Beef Ambassador in the Northeast Beef Program. She explained the program started in South Dakota and now includes 12 states in the Northeast. “We have a Zoom meeting every month,” she said. “We talk about events we’ve gone to that help educate people more about beef and answer questions like ‘what’s organic versus grass-fed.’”

While waiting for fairs and other livestock events to return, the Junior Ambassador Program is using social media to share information. “We’re on social media giving positive views about how animals are cared for in a clean environment and given the utmost in care,” said Ashlee.

Ashlee said Massachusetts 4-H received a grant to initiate the League of Protein Producers, a group of 4-H’ers who represent a variety of livestock species. The group strives to help consumers learn about local meat production and direct marketing.

Since Ashlee is now in college, it’s been more difficult for her to participate in livestock programs in her home state, but she’s the president of the New England Junior Hereford Association. At Iowa State, she’s a member of the Collegiate Cattlemen’s Association and Block & Bridle.

Although Ashlee doesn’t have any firm plans for her future after Iowa State, she’s considering pursuing vet school or embryology. “ET work has been big in the Midwest,” she said, “and it’s making its way to the Northeast. I would like to flush a couple of the top cows in our herd.”