Ahead of the curve at Robb Family Farm 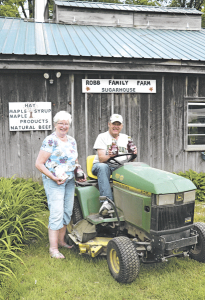 The Robb Family Farm has been thriving since its conception 114 years ago. The Brattleboro, VT, farm is run by Charles Sr. and his wife Helen Robb and Charles Jr. and his wife Karen Robb. Part of their success is achieved by staying ahead of the curve.

They were first a dairy farm, switching over to beef in 2011. “We got a herd of beef the day we signed the papers to sell the milkers. The notification of our Vermont license for selling beef came the same day. That was very strange,” said Helen. That was July 20, 2011. “Our milkers left on August 4, 2011. That was quite a day. Charles Jr. said ‘I miss the cows, but I don’t miss the industry.’”

Their resulting herd of 60 head of antibiotic- and hormone-free, grass-fed cattle were a mixture of Hereford, Charolais and a Simmental bull that produced nice, easy-going calves. “The vet laughed at us, told us we have a herd of mutts,” said Helen.

They produce hay grown on their 363 contiguous acres, and on a large parcel down the road from their farm. Haying 175 acres total, they plan to produce 7,000 square bales (depending on the weather), some baleage and 900 dry round bales, with the plan that if they run out of square bales, the round bales can be re-baled to meet demand. They also hay for people that ask them to hay their fields, and do custom baling for a horse farm. There’s no one else available with the machinery to do it.

“It’s just my son – my husband’s 83,” said Helen. He used to work alongside his son, but he’s experiencing a bump in the road due to health issues.

Last autumn, when Helen ran the numbers on QuickBooks, she realized yet another change was necessary. “It takes two years for an animal to become large enough to process. When looking at hay figures versus beef, there is an immediate return on the hay,” she noted. They reduced their beef herd to 16 or 18 to focus on the haying. “We’re ending the beef section, but we don’t know if we’ll end it totally. We need beef around; they help keep the pastures down.”

In this, they were again ahead of the curve, because selling the bulk of their herd at that time kept them ahead of the processing issues brought on by COVID-19. In the past, they took their cattle to Vermont Packinghouse in North Springfield, VT. “From what I’ve heard, it will be the first of the year before you can process any beef,” Helen reported. The older an animal is, the less choice cuts become available. Plus, you’re feeding an animal with diminishing returns the older it gets. Therefore, selling the bulk of their herd last autumn seemed prescient. “Otherwise we would have all these animals running around. It would really frustrate us.” They currently feel they have the right number, and the bull, with the choice still at hand to go either bigger or smaller.

They had another ace up their sleeve with their maple syrup business. This year they produced 1,000 to 1,200 gallons out of 5,500 taps. In this case, people’s response to the pandemic increased their business. “Our mail order business has been phenomenal. What we are finding is that people are buying large containers, gallons, rather than little containers. We had a gallon order from a customer in New Jersey. Someone else came for two-and-a-half gallons,” said Helen. On their glass bottles, they have replicated a label once used by Charles Sr.’s great-grandfather, Thomas F. Betterley, in the 1800s.

Their farm store opened on the last weekend in May. “Thankfully, people are thinking local. Online, our local sales are very, very good,” said Helen.

For a full house, they just signed on with a growing RV website (harvesthosts.com) that matches RV owners with farms, wineries, breweries and other places to park overnight for free with the understanding that wherever they are, they will buy products – and they do. “We had our first RV last Saturday. They bought well,” said Helen. “I never heard of them before. Our daughter found it.” Within a week of signing up, the harvesthosts.com organizers had vetted them, approved them and welcomed them aboard. “It’s a great idea,” Helen said.

For their wild card, they have co-branded a dessert, Robb Family Farm Maple Cream Gelato, packaged with their logo and made by the Vermont Gelato Company with the farm’s maple syrup. It’s the only wholesale selling they do with their maple syrup.

Chances are, the beef herd will not dwindle down any further any time soon. Charles Sr. enjoys watching them out from the living room window too much.