After half a century, shutting the door on the milking parlor 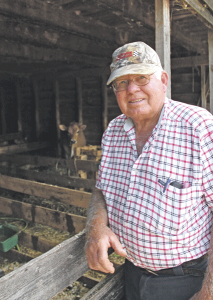 TAYLORSVILLE, NC – Over the years, registered Jersey dairyman Coy Reese has sold bred heifers to producers from around the globe, including Ecuador, Puerto Rico, Mexico, Turkey, Chile, Trinidad and across the U.S.

Reese’s next sale is going to be one of his last and likely his most significant, as he is marketing his entire string of milking stock, liquidating the herd 50 years after he took over from his father – 77 years after his father founded the herd, in 1943, when he got married. It began as a wedding gift from his father-in-law, with a bred registered Jersey cow.

By the time you read this story, the cows in the accompanying photos may be on another farm, in the Midwest perhaps.

“It’s about retirement time,” Reese said. “I want to stop milking before it’s too late.”

Reese lives on the farm in Alexander County where he was born and raised. His father grew a registered herd from that first Jersey cow, becoming Grade A in 1951. That same year he built a double-1 parlor.

“Back then he was getting $6.50 per hundred, with no haul bill,” Reese said. Compare that to the $10.50 milk was getting as recently as this June and one can understand why people don’t tend to start out as small dairymen anymore.

Reese’s herd included 135 milk cows which he milked two times a day in the double-3 parlor he built in 1979. The cows were kept in a freestall barn with pasture. All the barns were built with lumber from the farm. Reese farms his own corn silage, kept in horizontal silos, and also makes grass and small grain baleage. He makes dry hay, including some small square bales to feed to baby cows.

Even with the milking over at Reese’s farm, he intends to keep some animals around, raising replacements for other dairies and continuing to do field work.

“I enjoy it,” he said. “I enjoy working with the cattle. I’ve enjoyed seeing the animals grow up and produce.”

Over the decades Reese never considered switching breeds. “Why change when you’ve got the best?” he asked. He appreciates how Jerseys are efficient, easy to handle and produce good butterfat. For breeding, the farm first started utilizing AI in the 1950s, and hasn’t had a bull on the farm in 30 years.

Looking back on his career in the dairy industry, Reese said, “The first years went by slow, but the older you get the faster they go.”

His advice to dairymen of today and tomorrow: “You’ve got to be involved and pay attention to the details. You’ve got to be willing to work. It’s a seven-day-a-week job.”

Though life without a milk check will be different for Reese, he will have more time to spend with his grandkids, who live on the farm.