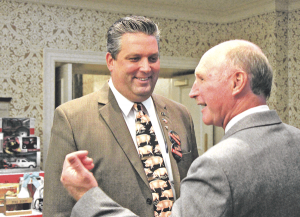 The National Pork Producers Council’s board of directors has announced its decision to cancel the 2019 World Pork Expo in Iowa out of an abundance of caution as African swine fever (ASF) continues to spread in China and other parts of Asia. The World Pork Expo, held each June at the Iowa State Fairgrounds in Des Moines, hosts approximately 20,000 visitors over three days, including individuals and exhibitors from ASF-positive regions. ASF affects only pigs and presents no human health or food safety risks. There is currently no vaccine to treat the swine disease.

The above paragraph came from a recent press release issued by the NPPC, and was forwarded to me by Penn-Ag Industries’ Assistant Vice President Jessica Darr. While attending Penn-Ag’s annual meeting, Darr, and Debbie Reed-Harry, casually mentioned ASF, something I was hearing about for the first time. “How serious is this?” I asked.

“We talk about it every day,” Darr said.

When I got home I began a file on it, and was prepared to write an article about it as a primer, drawing upon about 10 different websites and some farmers I know locally. But who really cares if the first ASF outbreak was reported in 1907, or that the disease evolved way back in 1700? It was my good fortune to find somebody who is directly involved with hogs and their susceptibility to this almost instant killer. He is vice president of the Pennsylvania Farm Bureau, Chris Hoffman, owner of Lazy Hog Farm in McAlisterville, Juniata County.

Although ASF hasn’t made an appearance in the U.S. yet, “I’m worried,” said Hoffman. The disease, he said, “can travel in so many different forms and ways. They’ve found it in feed, on human beings (people trying to smuggle pork into the country); it has the ability to move. And it doesn’t die!” Regarding the cancellation of the World Pork Expo this year, Hoffman pointed out the justified wariness. “I don’t know if it’s ever been cancelled before, but people come from around the world, and the hypothetical chances of a disease like that being here was apparently enough for them to make the decision not to have it.”

ASF is a viral disease that causes high mortality in domestic and wild pigs. It spreads through close contact with infected animals or their excretions, or through feeding uncooked contaminated meat to susceptible pigs. ASF affects only pigs, not humans. What happens if a swine herd contracts the disease? “My understanding is that there is about a ninety-plus percent mortality rate,” Hoffman said. “If a herd would get infected here in the U.S., it would be put down immediately.”

The problem is that the virus doesn’t die with the animal. It has the ability to live on in a dormant state. It has been found in feed. Darr echoed this sentiment: “Every time we hear of a grain shipment out of China, we hold our breath.” It is interesting to note that for Africa being the point of origin for ASF, the largest number of outbreaks seems to be in eastern Europe and varied points in Asia.

“While an evaluation by veterinarians and other third party experts concluded negligible risk associated with holding the event, we have decided to exercise extreme caution,” said David Herring, NPPC president and a producer from Lillington, NC. “The health of the U.S. swine herd is paramount; the livelihoods of our producers depend on it. Prevention is our only defense against ASF and NPPC will continue to do all it can to prevent its spread to the United States.”

Speaking of China, “our farmers are highly export dependent,” Herring said. “An ASF outbreak would immediately close our export markets at a time when we are already facing serious trade headwinds. The retaliatory tariffs we currently face in some of our largest export markets due to trade disputes are among the factors that prompted a conservative decision regarding World Pork Expo. U.S. pork producers are already operating in very challenging financial conditions.”

Herring added, “The widespread presence of African swine fever in China’s swine herd, the world’s largest by far, takes the threat of this swine disease to an entirely new level. We ask all producers, travelers and the general public to recognize the heightened risk since the first outbreak was reported in China last year and to heed biosecurity protocols in support of U.S. agriculture.”

According to Global PRRS Solutions, “Porcine reproductive and respiratory syndrome (PRRS) is a viral disease that causes a decrease in reproductive performance in breeding animals and respiratory disease in pigs of any age. PRRS is the most economically significant disease affecting U.S. swine production.”

“With PRRS disease, 48 hours outside of a host, it pretty much dies. It’s got to have that living organism to keep it going,” Hoffman reminded us. “But with the threat of African swine fever, a more wily and seductive adversary, PRRS could be replaced by a disease much more economically destructive.”