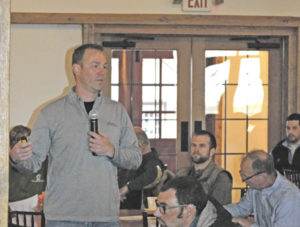 “I would argue that over the next five years what you’ll end up seeing is a convergence of precision ag platforms where you’re going to have platforms like Truterra which are going to do nitrogen management and carbon marketing at the same time.” So said Eric Rosenbaum, CCA, PA4R Alliance, senior agronomist, with Rosetree Consulting. “As time goes by you’re also going to see an overlap of those programs and I want you to get familiar with them now so that five years from now it’s not surprising you, and that you can go along every step of the way and understand what’s happening.”

“Nitrogen management is something you’re going to be thinking all year long,” Rosenbaum said. One of the projects he urged you to be aware of is the PA Conservation Innovation Grant (CIG) awarded by NRCS. NRCS is looking at all the soil health practices being implemented on the landscape, all the work that you’re doing for no-till, cover cropping and planting green, and they’re trying to figure out how to quantify the amount of nitrogen being cycled through those soil health systems.

In order for people to participate, you’ll need an estimation of what your cover crop biomass is, so “we’re going to send an agronomist out to your farm about a week before you plant to estimate the amount of biomass that is present in that field,” Rosenbaum explained. “If you have a cover crop, we’ll do that. If you don’t have a cover crop, it’s okay – you can still participate.” At the end, you get a Granular Insights Account you can follow along with online. At the end of the year, you get a Nitrogen Loss and Nitrogen Use Efficiency Report. What the PA4R Alliance gets out of it is a technical paper, which allows them to go to NRCS, and if everything works out right (and if you sign up for CSP), Advanced Nitrogen Management is going to be part of that. You’ll be able to get a cost-share for doing nitrogen modeling and other advanced nitrogen management practices.

“Right now, you have a couple of programs that will help you do some of these soil health tests,” Rosenbaum said. “We do our soil health tests when you are doing your regular soil testing. As you look forward to the next couple of years the NRCS is going to come out with a soil cap health program that will allow you to go to NRCS and get technical assistance and have soil health plans written.”

“I think that coming out of winter/early spring when those microbes are dormant, your populations are going to be lower,” Blazure said. “My understanding with the soil temperature is when those soils get to the lab, they are dried, so those microbes then go dormant … These soil health tests are a great way to get those benchmark measurements.” The soil health benchmark study, which PASA initiated in 2016 with about 16 vegetable farms, expanded to include row crop farms and a pastured livestock operation. As a part of that, they’re collecting soil samples. They’re also asking participating farms to keep good farm records in terms of crop rotation, the number of equipment passes you’ve had on that farm because they’re calculating the potential soil disturbance intensity depending upon the type of equipment you’re using and how many passes were made, and keeping track of soil amendments.

Close to 120 farms are now involved in the program. They are grouped into three cohorts. “We’ve got row crops,” Blazure said, “which includes both a no-till system and then are a handful of organic row crop farms that participate in the study that have full tillage. And pastured livestock farms. These farms use the Cornell Soil Health Test, which incorporates three different parameters in their testing. They’ve got that biological component, part of which is this soil respiration similar to the Solvita test – the classic kind of chemical components with pH, potassium, phosphorous, magnesium, some of those micronutrients.” There’s also physical components: the water-holding capacity of the soil and soil aggregation (the good, crumbly soil texture we want and that we’re striving for). “With each sample that comes in, they’re doing a soil texture test. They are comparing soil samples from your farm comparable to similar farms in their database. Depending on what your sand-silt-clay content is, your results are only going to be compared to other farms in that database with that sandy loam-type soil texture.”

It’s a blending of the physical, chemical and biological. For the structural stability to be workable, when it rains, “we want to capture that rainfall, not running off and leaving the fields. That aggregation is a critical component with how well that soil functions and the infiltration levels,” Blazure said. The other benefit you get with that soil structure is an air exchange. Oxygen comes down into the roots, but the soils respire. Soil breathes like we do. That air exchange is needed within our soil profiles to get oxygen down and carbon dioxide up.