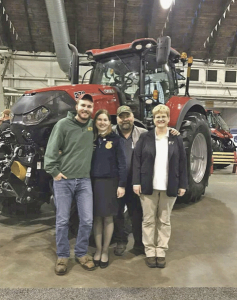 There are only nine stoplights in Lewis County, NY. There are also twice as many cows as people, according to Steve Ledoux. The rural area not far from the military base in Fort Drum relies on agriculture – specifically maple syrup, dairy and logging. Ledoux and his wife Michele are among the region’s farm families, though they specialize in beef, pork and poultry at their Adirondack Beef Company based in Croghan.

Both Steve and Michele earned agriculture-related degrees and have ag careers, Steve is a sales account manager for Agro Liquid; Michele is the executive director for Cornell Cooperative Extension-Lewis County. But it wasn’t until their children arrived that they started their own farm. Inspired to provide their kids with healthier food, they purchased livestock and committed to producing naturally-raised meat, without the use of antibiotics or growth promoters, long before the approach was popular.

“We just started out doing the natural thing about 25 years ago, before it was cool,” he said. “Now everybody wants to do it.”

The first cow the couple sold at auction convinced them selling direct to consumers was their only option. The animal couldn’t be used for breeding because she had hardware, but she would make excellent beef. The sale brought $212 for the 1,480-pound cow.

“I said ‘I will never do that again,’” Steve said. “That’s what got us started selling everything right off the farm and we haven’t looked back since then.” 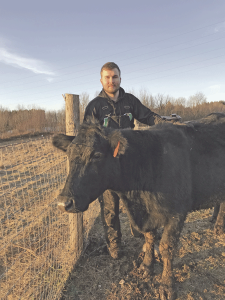 After earning mere pennies on the pound for selling at auction, Ledoux focused on selling direct to consumers. The family sends products to three farmers markets each week (one in New York City) and offers CSA shares that include eggs, chicken, pork and beef products.

At one time, the family had maintained 100 brood cows, 150 pigs a year, 4,000 chickens and 250 turkeys. That was manageable while their kids Jake and Camile lived at home and were active with FFA, serving as state directors before attending Cornell University. Jake now works at a nearby farm and Camile is finishing up her degree.

“We’ve scaled back quite a bit and we’re probably going to go just do grass cattle, and I’ll buy feeder calves in the wintertime and feed them all summer,” he said.

Ledoux prefers short horn bulls bred to Angus. The cross works well for their pasture-based program. The calves are small at birth but grow quickly and they convert to a mostly grass diet better than other breeds.

“We work very hard to run a very clean operation,” he said. “Our goal with the natural program is to vaccinate and prevent diseases rather than treat with antibiotics and we place a lot of emphasis on animal health and well-being on our farm.”

Grass and hay are the only crops in rotation and any feed needed for any of the animals is purchased. The main farm is comprised of 36 acres; they also use 143 acres owned by the farm where Jake works, bringing their total to 170 acres.

“Last year we made the mistake of ripping out all the old dairy fence on the farm and then it rained so we couldn’t get the fence back in,” he said. “We have a lot of grass we’re putting under fence this summer.” 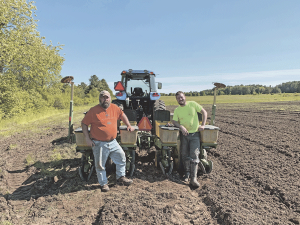 Like any business, Adirondack Beef Company strategically times its inventory (its livestock ready for processing). The coronavirus pandemic has made that difficult. On the plus side, people are looking for local products since the mainline food distribution system has been unable to keep pace with demand.

“Our phone is ringing off the hook. We’ve got all kinds of new customers that we never had before,” he said. “People are buying 100 pounds of hamburger at a time and placing pre-orders for chickens and turkeys. It’s never been like this before.”

Securing spots at the processing plant has been challenging. Ledoux’s next processing appointment isn’t until February 2021. Stay-at-home mandates have also disrupted demand for some of his best selling products: beef snack sticks. The grab-and-go snacks sold well up until Christmas. Sales plummeted in the New Year as people stopped traveling. He donated about $1,000 worth of product to the local food pantry to avoid wasting it.

“They are shelf stable for six months and were going to go out of code,” he said. “I knew they could use them rather than just throwing them away.”

Despite the challenges and changes, Ledoux is committed to serving customers. Unlike grocery stores that have dramatically increased prices because of COVID-19, he has held steady. So far, his production costs have remained the same. And he believes holding steady will foster long-lasting relationships.

“My philosophy is, if you take care of people when times are tough, they will remember you when times are good as well,” he said. “It’s seemed to work so far for us.”