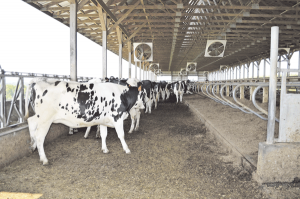 Through his work as an ag engineer at Penn State, Dan McFarland visits numerous dairy farms. On most farms, the owner knows how many cows are in a given group or area, but not in relation to the number of stalls or feeding space.

McFarland said most studies on stocking density are calculated on a cow per stall basis. Although there are several methods to determine stocking density, one simple method is to divide the total number of cows by the total number of stalls. If there are 101 cows and 84 stalls, the ratio is 1.2 cows per stall. “I think it’s a better illustration of what’s happening,” said McFarland, explaining the example. “It isn’t a one-to-one relationship of stalls to cows. There are more cows there, and there will be less time for cows to rest.”

For optimum performance, cows should be resting for about 12 hours each day. However, overcrowding reduces the amount of good rest for cows. McFarland references studies on resting behavior conducted at UC-Davis. “The lowest percentage of stall use was one hour post-milking,” he said. “That’s because cows are feeding right after milking. There was a sharp increase (in stall use and resting time) over the next few hours, usually an hour or more after the cows came back from the milking parlor. There was also a very high percentage during the night and early morning hours.”

The stall use index (SUI) is an indicator of how well stalls are being used, and is measured one hour after cows return from morning milking. SUI is calculated by taking the number of cows lying in stalls divided by the number of total cows not eating. “Eating and drinking are behaviors we want to see,” said McFarland. “Generally we like to see that number greater than 0.75.”

McFarland cautions producers to not to rely on a single measurement because in a situation where one calculation indicates significant overcrowding, stall use might be excellent.

“What they found is that the average stall use in 24 hours for the group that was evenly populated was 61%,” said McFarland. “In the 30% group, it was 91%. Those stalls were being used very well; unfortunately, there were cows standing and waiting for stalls.”

Resting area performance monitoring should include locomotion scoring, an indication of the degree of lameness that shows when cows are standing for too long or not using stalls as they would like to. Hock and knee lesion scoring indicates problems with the stall surface, and hygiene scoring indicates stall and alley cleanliness. These scores will be negatively affected in overcrowded facilities.

McFarland said some dairy barns built in the 1970s and still in use today probably don’t have properly sized stalls. Freestall length should provide adequate lunge space for cows to rise and recline easily, and to rest comfortably. “Closed front freestalls should be a minimum of 8.5 feet,” said McFarland, adding that new closed front stalls are usually 9 feet. “With open front freestalls, where cows can share some lunge space, the minimum can be 7.5 feet but more typically 8 to 8.5 feet in newer facilities.” McFarland added that any open front stall that has some kind of obstacle in the lower portion of the stall should be considered a closed front stall.

“Proper neck rail position is when the cow is standing in the stall with all four feet on the stall surface and their backbone level,” said McFarland. “Then I’m confident the cow will go into that rocking position and settle into the stall.” McFarland added that neck rails should be positioned for the largest cows in the group.

If the brisket locater is not in the correct position, cows adopt a restless posture. “There’s a lot of rear leg movement that can lead to hock lesions,” said McFarland. “We want to give the cow enough space to get up on the stall. Cows in a comfortable, restful position are usually in the range of four inches or more ahead of the rear curb.” With adequate space, the rear legs are on the stall and leg motion stops. An added benefit is that cows tend to bring their tails up onto the stall rather than leave the tail in the alley, resulting in cleaner tails and udders.

McFarland said when resting areas are overpopulated, cows tend to stand idly more often, which can lead to lameness issues. Cows may also show increased aggression as they fight for stalls. “They’ll have fewer and longer resting bouts because when they get to a stall they want to claim it and use it longer,” he said. “This can lead to hock injury as a result of laying down too long. And with more cows, there will be more manure and dirtier conditions.”