Adding on eggs of all kinds 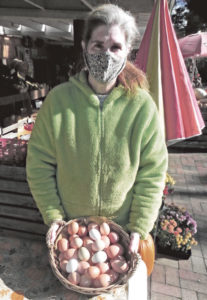 OLD BRIDGE, NJ – While it wasn’t in his master plan to expand one aspect of his business, veteran Garden State vegetable and fruit farmer John Hauser said his egg sales business has evolved – profitably – since 1985, when he began raising layer hens in his backyard.

Like a lot of farm stands, Hauser Hill Farms’ retail stand saw an uptick in sales of fresh fruit, vegetables and eggs since the start of the pandemic, as many people sought to avoid crowded supermarkets. Hauser has a large walk-in refrigerator behind his farm stand and several fridges out front to store vegetables and eggs for the self-serve crowd, post-Thanksgiving, when the stand is no longer staffed.

Hauser explained that his now-booming egg sales business came about by chance. His egg business started with just a few chickens. “I was curious about trying to bring the natural animals back to this area, like the pheasants and quail that were once here,” he said of his suburban location. He began raising quail in his backyard in spacious, free-range pens to see how they would do.

“Some breeds of quail are quite prolific with laying eggs. We said ‘What are we going to do with all these eggs?’ We found out there was a market for them,” Hauser said. He and his crew began to ramp up production “as soon as we had enough tailgate markets, because we found we never had enough eggs initially, so we always had to buy some in.”

From a few layer chickens, he added the quail, and then turkeys and ducks, and later on, Cordova chickens for green eggs. Customer demand for non-chicken eggs has grown through the years at the farm stand. Most recently, he’s added Guinea hens to the mix, as they begin making a lot of noise if threatened by raccoons or foxes. This built-in alarm system has served Hauser well in recent years, as he can look out his bedroom window to the pens if he’s woken up in the middle of the night by the Guinea hens.

“All the birds are free-range and can go back in the shelters at any time, so they’re outside as much as they want to be. You can give them cantaloupe or watermelon and cut it up during the season there. They love it,” Hauser said.

“The exotic eggs – the duck, turkey and quail eggs – they tend to lay more in spring and summer. In winter they’re not as prolific. These eggs are harder to find and they bring a premium,” he added.

Hauser said his father raised chickens for eggs, for family and friends, “but we would always eat the chickens too.”

By way of diet, Hauser grows his own non-GMO field corn. “I don’t grow much field corn, and then I buy regularly prepared laying mash for them that contains the minerals and calcium they need for the shells, as it’s higher in protein than plain corn,” he explained. “During the season, about eight months out of the year, they all get leftovers from the farm stand – scraps of lettuce, broccoli – it all goes to the chickens and rabbits.”

Aside from his poultry pens, Hauser’s yard is also adorned with rabbit hutches, as his father also raised rabbits for meat through the years.

“What’s nice about it is it’s something that is year-round, so when you have spikes in egg production and you get 12 or 20 dozen eggs per day, we sell those out at the farm stand,” he said. “Even if it’s 25 dozen, they all sell out.”