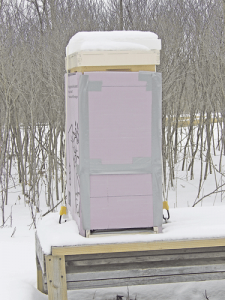 A fair bit of agriculturists have thought of adding honey bees to their farmsteads. Though intentions are good in creating a productive apiary for honey production, there are some facts and important points that need to be identified that lead up to harvesting time.

The average person now consumes almost one pound of honey per year. Honey’s increase in popularity is due to honey’s increase as a sugar substitution. There has been an increase of apiaries even though the honey bee populations are being devastated by diseases and outside influences. A colony of an average of 50,000 honeybees will fly around 55,000 miles and visit an estimated 2-million flowers to make 1 pound of honey. We can harvest honey from honeybees because they are naturally programmed to create more food/honey storage than what they consume.

Bees need shelter and there are several different types of apiary structures. The most commonly one used is the Langstroth hive. It is just a square box with no top and no bottom that are stacked on each other with a base and a lid. The walls of this box will vary in height. The largest of the boxes is called the brooder box. This is where the queen and worker bees will do their day-to-day brooding activities, laying eggs, larva rearing and guarding the hive. The largest of the box is also called the deep super. Super is the name given to the boxes that “specifically” store honey.

There are also smaller boxes that are known as medium and shallow supers that are, for the most part, used for honey production. In between the brooder and the super is normally a holed grid pattern called a queen excluder. The queen is larger than a worker. She is unable to pass through the grid and into the super to lay eggs.

In the boxes are eight or 10 individual, removable frames, almost like a single pane window frame. These frames are where the bees will hang their honeycomb and from that it will either be used for brooding young or honey storage. You can get flat wax inserts to hang in the frames for the bees to build their wax cell on to. The size of your bee colony and the size of your hive structure will give you the rough estimation of how much honey the bee hive will produce. An example of how much honey can be yielded: a deep super has about 5 gallons of honey in it. A conservative hive size is two deep brooder/super boxes just for the queen and hive’s use, then a queen excluder, then a honey super.

To start you are going to need to find a bee colony from a reputable company. Wild hives are not recommended. If you are going to get bees this year then you have to order NOW. Ordering hives usually ends in March with limited quantities and hive pick up usually starts sometime in April.

During this first season you will be getting accustomed to your hive. Do not harvest the honey until summer of the next year.

Almost all the mechanics of frame removal and wax decapping is the same. The difference is when it comes to honey extraction. Some frames are spun in a drum and just the honey is removed. The frame and wax cells are returned back to the super for the bees to reuse and store honey again. The other method is complete removal of wax and honey from the frame by increased temperatures to make the honey and wax fluid. The honey and wax will naturally separate when cooled. The wax can be used for added value and turned into balms, candles and soaps just to name a few. All honey with either method needs to be filtered before sale. Each state is going to have laws about honey processing, handling and selling to the public such as the jars used and labeling.

The final topic that needs to be discussed is hive maintenance.

Visual inspection of the hive is a must at all seasons. Each season will also bring its own types of challenges from feeding the hive, to rodents moving into a warm hive in the dead of winter, varroa mites, to Nosema fungal infection that start to act up in spring and continue through late fall. Even listening to and smelling the hive could give an idea of what might be going on. Hives should sound like a hive with buzzing bees. Hives give of a distinct sweet smell from the honey and wax. A quiet hive when it should be busy should give cause for inspection and could lead to the diagnosis of Colony Collapse Disorder or CCD and Foulbrood Disease, a bacterial infection affecting the larval stage of the honey bees that can cause a foul smell that ultimately results with a hive needing to be burned in order to stop further neighboring hive infection.

Maintenance also includes the area around the apiary. The apiary area should be clean, dry and somewhat secluded from people and the elements. The hive, if possible, needs to be kept away from pesticide spraying because of the pesticides non-targeting insect properties. Fences, electric and otherwise should be utilized to keep large honey seeking animals out such as bears.

Beekeeping has far more depth then what has been discussed here. Joining a beekeeping organization to receive up to date information is helpful. You can also contact local agricultural cooperatives or agricultural universities with questions.