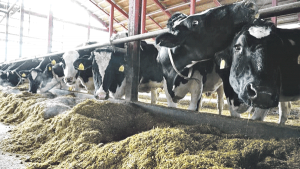 Most consumers know that milk products are a good source of calcium in their diets. What many may not know (but farmers do) is that dairy cows also need calcium added to their diets, especially before calving and during the transition to lactation. A new study led by Dr. Phil Cardoso found that calcium added to acidified prepartum diets for dairy cows can improve several postpartum issues including lower rates of uterine infection and a quicker return to ovulation.

Cardoso is an associate professor in the Department of Animal Sciences at the University of Illinois at Urbana-Champaign who is conducting research and providing outreach programs in dairy nutrition and reproduction. He earned his Ph.D. in ruminant nutrition from University of Illinois and his master’s and DVM degrees from the College of Veterinary Medicine at Universidade Federal do Rio Grande do Sul in Brazil.

“We know that calcium metabolism in dairy cows is very important. There’s research saying that 50% of multiparous cows [those on their second or third pregnancy] suffer some sort of deficiency of calcium,” Cardoso noted. That is often the result of feeding an acidified diet prior to calving, which forces a cow to manufacture and redistribute calcium from her bones. This internal calcium production carries the cow through to lactation, when she resumes consuming calcium in her diet.

Cardoso’s study started with the notion that producers often feed negative DCAD (dietary cation-anion difference) diets in the weeks before calving, supplemented with small amounts of calcium (1% of DM). He noted there has been little guidance on how much to acidify the diet to remobilize the optimal amount of calcium and avoid losing it in urine. He also said no one had tested the effects of adding different concentrations of dietary calcium to the fully-acidified DCAD diet.

Without the proper amounts of calcium, animal tissues don’t work optimally, becoming subject to inflammation and susceptible to disease. That’s why Cardoso and his team tested whether an increased amount of calcium (2% of DM) added to an acidified diet during the last month of a cow’s pregnancy could prevent those health issues and result in more favorable reproductive outcomes.

A total of 76 multiparous Holsteins were used in the study, divided into three groups – one set being fed a non-acidified DCAD diet with no added calcium; one receiving an acidified DCAD diet (-24 milliequivalents per 100 grams of dry matter) with no added calcium; and one being fed an acidified DCAD diet (-24 milliequivalents) with added calcium at 2% of DM. The DCAD was mixed with regular forages and corn silage in the cows’ prepartum diets. (Cardoso told Country Folks using -24 milliequivalents was necessary to achieve full acidification, as that led to urine pH between 5.5 and 6.0.) After calving, all the cows were switched to a normal postpartum diet with 1% of dietary DM calcium. The researchers utilized calcium carbonate (limestone) to add the calcium.

At both two and four weeks after calving, they studied any changes in cows’ blood, uteri, ovaries and pregnancy status. The results? “There was a tendency for cows fed the negative DCAD-plus-calcium diet to get pregnant at a higher rate than cows fed the control diet,” Cardoso said, but he added that a larger population of cows needs to be tested to ensure that result. What is sure is that those fed added calcium took less time to ovulate and how lower levels of uterine infection than the cows fed other diets. According to their study, this was likely due to the fact that cows on the calcium-added diets had more tight junction proteins in the uterine lining. These proteins bind adjacent cells, preventing a “leaky” tissue that could allow pathogens to enter the bloodstream during calving.

“In the same way leaky gut may be happening when cows experience heat stress, perhaps cows experience leaky uterus if they don’t have the high concentration of circulating calcium and the amount of tight-junction proteins in the uterine layer,” Cardoso said. However, to test that theory would require uterine biopsies, so at this point, his team will not be pursuing this information from larger herds. Of note is the fact that this is the first study showing tight junction proteins even exist in the uterus of a dairy cow, indicating that added calcium improves their number and function.

Additionally, cows fed the calcium-added diets also had more disease-fighting antioxidants in their blood and more glands in the uterine lining, which keep the organ clean and produce hormones that can kickstart ovulation.

Cardoso pointed out many producers have been using a negative DCAD strategy for decades, but aren’t acidifying the diet enough, taking it to only -5 milliequivalents and not adding calcium, or adding it at only 1% of dietary dry matter.

“We are saying that you need to go to -20 milliequivalents and up to 2% of dietary dry matter for calcium,” he said.

Ultimately, a negative DCAD diet with added calcium is useful both for the transition to lactation and for improving future pregnancy outcomes.