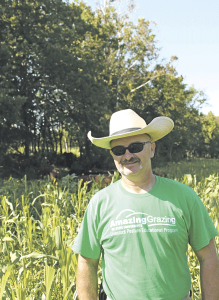 ROXBORO, NC – Johnny Rogers walked through a field of warm-season annual forages, checking on a group of his registered Red Angus cattle.

To inspect the cowpeas and daikon radish and brassica growing at ground level – the field was planted with Ray’s Crazy Summer Mix – Rogers pushed aside long stalks of sorghum sudangrass and sunflower.

“If this gets too tall it can spook the cattle, especially calves,” Rogers said. Cattle like being able to watch the horizon for possible predators.

In the past Rogers has run a bushhog without the blade engaged through a field of summer annuals to knock down the stand to where his animals can still graze it while being able to watch their surroundings.

When he puts up polywire to make temporary pastures in a field of tall summer annuals, Rogers will drag a tire-mounted mineral feeder over the stand to permit his animals to see the fencing wire.

Still, Rogers said, “when they get spooked at night, the next day you’re mending fences.”

Despite all that, warm-season annuals are a major net positive for Rogers, who with his wife Sharon runs a herd of registered cattle, mostly red Angus with some SimAngus, in North Carolina’s northern Piedmont. The area is solidly in the fescue belt, where summer temperatures rest in the 90s.

“The good news is annuals don’t need a lot of rain,” he continued. “The bad news is they do need some rain.” Most years Rogers will graze his summer annuals twice – three times if conditions are right.

This year, there wasn’t too much rain in May, which is when Rogers established the field of summer mix after burning back a winter annual stand of oats and ryegrass (using one quart glyphosate/acre).

The mix of warm season annuals has done relatively well this year, but a separate field of Bermudagrass, seeded on May 1, is competing this summer with goosegrass and barnyardgrass.

“My strategy is to keep it short with grazing and mowing,” Rogers said.

Rogers has been raising cattle since 2001. Today he leases three farms, two in Person County and one in Granville County. His herd includes 120 cows. He sells seed stock, both private treaty and as a cooperator for Red Hill Farms in north central Tennessee. He was first connected with that farm when he bought his initial herd bulls from them.

Rogers sells 25 to 30 bulls at Red Hill’s annual sale, as well as some open heifers. He will sell bred heifers private treaty, and finishes and direct market about 15 steers every year. He also sells weaned calves through order buyers.

“We like to sell our calves weaned,” Rogers said. It makes it easier for him to move them, and easier on the eventual buyer. The bull calves, once weaned, are sent to Tennessee for rearing, which makes it easier to intensively graze the rest of his herd using just polywire as fencing for temporary paddocks.

Rogers’s setup includes about a dozen permanent pastures. He is continuously adapting and experimenting with his forage regime, but one thing he does practice every year is stockpile fescue for winter grazing. One way he ensures a winter supply of forage is by feeding hay in September and October.

“I really like doing that,” Rogers said. “We’re calving then, so we can have a better track of the herd. We still graze some, but we’re also clipping and fertilizing fescue, getting ready for the winter. We feed hay in the fall but then we graze in December, January and February.”

Recently, Rogers has planted spring oats in autumn for a fall grazing crop. There’s not enough for all his cows, but he uses it for first-calf heifers and special needs cows. “By later November, it’s good grazing,” he said. He will also interseed rye and oats into his Bermudagrass to provide winter grazing.

Rogers buys all of his hay, and is making strides to improve his hay storage and feeding program. He regularly moves his feeding rings to spread out manure deposition. He covers all his hay and has recently gotten it up off the ground with plastic pallets.

Rogers is originally from eastern Tennessee. He came to North Carolina to study at NC State, where he earned a master’s degree in animal nutrition. Today, in addition to farming, Rogers also works part-time with NC State as an Extension coordinator, managing the Amazing Grazing program.

“It gives me a window of what it would have been like if I got my Ph. D. and became a professor,” he said.

In that role, he helps Extension agents and farmers in North Carolina develop their pasture management programs, and has worked with cattle, pork, poultry, small ruminant and horse farmers.

Rogers has a flock of Kathadin sheep on his farm, which he will intergraze and also graze between the panels on an adjacent solar farm. When he first rented his main farm, Rogers also grazed goats to browse overgrown areas.

Red Angus is the main grazing animal at Rogers Cattle Company. That’s because, according to Rogers, “my wife and I both like red animals.” It’s also because Rogers likes how the breed has good heat adaptation – important in this part of North Carolina – as well as good maternal characteristics, good disposition and good performance on grass.

“With black you’ve got lots of competition,” he added. “The market for red is not as big, but it’s not as competitive – though that is changing.”

Rogers fall calves with AI. He is also in his third year of using ET. “We can afford to do it because we get a good price on the bulls we sell,” he said. By using his average cows as recipient dams and receiving embryos from his better cows, he is improving the overall quality of his herd.

“Moving to ET wasn’t as bad as I thought it could have been,” Rogers said. Because he already used AI, the recipients were in the cycling program to be AI’d.

“I like to calve early and often, like a good efficient commercial herd,” Rogers said. “ET could spread out the calving window, but it hasn’t been a problem yet.”

At the end of summer, Rogers is looking to convert his stand of warm season annuals to Bermudagrass or novel (endophyte-free) fescue.

“The biggest thing with novel fescue is good grazing management,” he said. “With toxic fescue, cattle will naturally stop grazing.” Because cattle like it better than toxic fescue, non-toxic fescue can get grazed too intensively.

“Some people tell me ‘My cattle don’t have a problem with fescue.’ I ask them ‘Have you ever seen them off of toxic fescue?’ There are so many variables,” he said. “I think that is why those of us who are drawn to raising cattle and farming like what we do. We like the anxiety. At the end of the day you win some and you lose some.”