A systems approach to phosphorus management 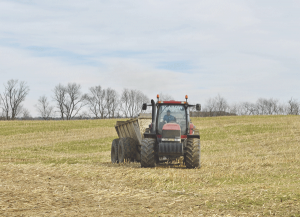 Deanna Osmond, department of crop and soil sciences at North Carolina State University, said soil health is defined in many ways. “It might be defined as an ecosystem or as set of metrics (biological physical and chemical) to assess soil health,” she said. “But today, no standardized soil health assessment has been developed.”

Soil health is generally discussed in terms of practices such as cover crops, crop rotations, reduced tillage and maintaining continuous plant growth. But when soil health and water quality are considered together, the question becomes ‘if we have healthy soils, will we have perfect water quality and reduce non-point source pollution?’

Considering the lack of consistent practices yielding consistent results, it’s important to use systems of conservation practices where soil health practices are part of the slate of practices and not standing alone to solve the problem of agricultural non-point source pollution.

Osmond explained the three pathways through which phosphorus is lost: sediment-attached phosphorus soil erosion, soluble phosphorus runoff, and either sediment or soluble losses through leaching. “It all depends on soil type and the systems that are there as to whether there is soluble, sediment, or both,” she said.

Soil health practices may include conservation tillage, cover crops, and erosion control such as terraces and grassed waterways, riparian buffers and wetlands.

Osmond said in addition to soil health practices, ‘stacked’ practices will help realize true phosphorus reduction. Data from long-term studies shows that sediment is reduced through vegetative buffers, and those buffers can be effective in slowing sediment-attached phosphorus.

Regarding runoff control, it’s accepted that conservation tillage does not reduce soluble phosphorus, but cover crops and other practices such as controlled drainage (drainage water management) may reduce phosphorus runoff.

Osmond said in studies where cover crops have been studied in relation to the application of animal manure, it appears that the signal from the animal waste phosphorus loss overwhelms any signals seen from the cover crop.

Another loss pathway is leaching control. A study conducted on four different soil types with low or high phosphorus status in the coastal plain region of Maryland and Delaware showed increased leaching losses as more water went through the system.

“After manure is applied, there are different patterns depending on the fertility of the soil relative to phosphorus leaching,” said Osmond. “Leaching losses are different on coastal plains soils – you get soluble phosphorus moving. There aren’t any cracks or root channels.”

Osmond said conservation practices for leaching control are scarce. “We cannot stop draining our soils,” she said, adding that draining is essential to agricultural productivity. “It appears that on well-structured soil, some tillage might be useful, but this is the antithesis of soil health practices.”

In regard to source control, it’s critical to look at the relationship between the 4Rs (right source, right rate, right time, right place) and soil health practices. There’s a tradeoff between surface-applied fertilizer on conservation tillage systems and disking fertilizer in.

Osmond said it’s critically important to look at the relationship between the 4Rs along with soil health practices. “It’s important to use systems of conservation practices,” she said, adding that viewing soil conservation practices as systems has been studied since the early 1990s. “About 10 years ago, NRCS started talking about stacked practices. We want to avoid the problem, so in the case of phosphorus, if the soil test says you have plenty of phosphorus for crops, don’t put any more on. In thinking about soil health practices, we can control some forms of phosphorus through conservation tillage and cover crops, but we have to recognize that we may have tradeoffs between sediment-attached phosphorus and soluble phosphorus.”

Once example of a stacked practice in a no-till system would be using cover crops for increased evapotranspiration, resulting in less discharge; which might then be paired with drainage water management. “Soil health practices are a subset of conservation practices,” said Osmond. “There will be tradeoffs, particularly around phosphorus losses looking at soluble phosphorus versus sediment-attached phosphorus losses.”

Osmond said the importance of nutrient management can’t be overemphasized. “Nutrient management is part of a system of conservation practices,” she said. “Making sure soil phosphorus levels are not increasing would be helpful; also managing placement and timing of fertilizers.”