A strong start with deep pedigrees 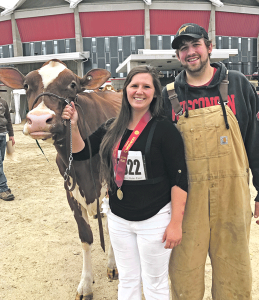 Laura Holtzinger grew up on a dairy farm in south-central Pennsylvania, and Matt Linehan was raised on a Jersey farm in Wisconsin. Both of their parents strived for outstanding herd genetics, and both Laura and Matt picked up on that aspect of purebred dairy cattle when they were showing as youth.

“I was active in 4-H and in Junior Holstein,” said Laura, adding that her father maintained a high quality herd and referred to himself as a businessman first and a dairyman second. “The market has changed, so he adjusted with the market over the past two years. He hasn’t been raising heifers or working his breeding program but he was always interested in breeding for type.”

Laura enrolled at Penn State as an animal science major but switched to ag journalism. She paid her way through college working cattle sales and shows, and graduated in 2016.

Matt was active in high school sports, but rather than choosing a college to continue as an athlete, he selected a college that would allow him to remain close to home where he continued working toward excellent genetics.

Matt worked sales and shows in Australia, Italy and across the U.S., which allowed him to see how dairy farming was done in other areas.

“Matt and I met in March of 2016 working at an Elite Genetics sale in Syracuse,” said Laura. “We both worked shows and sales all summer.”

Although Laura sometimes thinks about how she likely crossed paths with Matt well before she met him, she’s content with the timing and eager to continue their joint effort to build a superior herd. “We have a lot of mutual friends, and it’s been great to combine our networks,” she said.

Both Matt and Laura have experience at numerous high-profile shows, including the All-American Dairy Show, Madison and Louisville. “I was part of the show crew and helped with the cattle, feeding and milking, and presentation of the string,” said Laura, adding that being at prestigious shows added to her knowledge base. “I’ve worked at shows since I was 13, so it was great to work at the larger shows.”

Although Laura was able to keep one of her own brood cows when her family sold their herd, she has some good daughters from that cow. Matt has been breeding, showing and marketing purebred Jerseys, and brought the best with him. Today, they have about 25 milk cows with several due to freshen soon, and about 30 heifers.

The herd is about half Jerseys and half Holsteins, both black and white and red and white. “We’ve had a lot of success selling Jerseys,” said Laura. “They’re so efficient. Components are good, and Jerseys are in the spotlight now. We have more Jerseys with deeper pedigrees.”

Laura considers it a blessing to be involved with the herd Matt built over the years, and enjoys seeing the pedigrees, show records and potential in the herd. “I think that’s unique for people our age,” she said. “Most people our age don’t have the opportunity to maintain a herd of that size and quality.”

Both Laura and Matt make careful breeding decisions well in advance of each cow coming into heat. “We try to be prepared,” she said. “I like to look at the proofs, but they aren’t always completely accurate.” Although Laura likes to look at proofs, she also believes seeing the phenotypical expression of genetics is important. Laura said going to Madison makes it easy to select bulls because so many quality cows are there.

Instead of relying exclusively on genomics to make mating decisions, Laura and Matt pay close attention to the genetics of the winning animals at major shows. “We look the offspring at shows and sales,” said Laura. “It’s different than just looking at the catalogs from the semen rep. We’re breeding more for type than milk because that’s been our market.”

Matt said they’ve had success using type bulls and following up with an excellent management and feeding program. “We put more emphasis on feeding and caring for them rather than picking bulls that aren’t high in type but positive in components,” he said.

Laura and Matt launched their social media effort just over a year ago on Facebook and Instagram, and it has paid off. “People can follow us and find out what we’re up to,” said Laura. “We were in Madison with Fahrenheit, and someone I don’t know said ‘Go get ‘em, Fahrenheit.’ It was so neat to know someone we don’t know knows our cow’s name, has access to her story and can ask us about embryos.”

“Fahrenheit” is Linehan Prin Fahrenheit-Red, and here’s where the deep pedigree comes in: she’s a homebred Excellent 91 De Prince out of a 2E EX90 Windbrook out of a VG 87 Shaquille out of an EX94 Astro. Fahrenheit placed second in Madison (2019) and was also named best bred-and-owned senior three-year-old, and best udder at the All-American Red and White show. She was also named honorable mention senior three-year-old. Fahrenheit is a coming four-year-old, and will be scored again this lactation.

Laura and Matt are carefully selecting some cows for flushing. It’s an expensive venture, and both agree the mating has to be worthwhile. “In general, we let them prove themselves first,” said Matt, explaining which cows are considered for flushing. “We use the older, established cows that score high and do well for many years. Those are the cows people want rather than just young cows.”

With unlimited resources, Laura said they’d do a lot more flushing. But finding suitable recipient cows isn’t easy, and although they can freeze embryos, there’s a risk of losing viability. She added that it’s critical that the recipient cow is under the care of someone who will care for her properly and ensure the best calving outcome.

Although Matt and Laura haven’t settled in a permanent residence of their own yet, they’re hoping to soon. One consideration for the future is to offer boarding services for show cattle.

Visit Linehan Jerseys – Big Time Genetics on Facebook and watch for them at dairy shows.