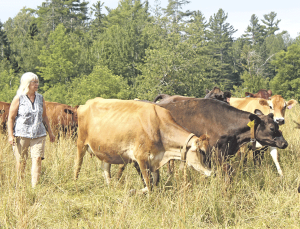 “Widdershins refers to walking in a counter-clockwise circle,” Wendy Russell, owner of Widdershins LLC, wrote on her About Us page. “We enjoy doing things a little differently, as our farm name and choice of lifestyle shows.”

She and her partner started raising animals on their homestead in Dover-Foxcroft, Maine, 30 years ago out of a love of animals and an interest in being self-sufficient. They taught themselves through books and hands-on learning. Wendy’s knowledge base as a veterinary assistant also helped, and cheaper vet care was an added bonus.

They started with goats, rabbits and a large garden. “We skipped the entry-level chickens,” Wendy joked. “As time went by, we added a couple pigs and from there it just blossomed.”

Soon they were approached by community members asking if they could raise a pig or cow for them, so they began selling whole and half hogs and cows. As demand grew, they realized they needed more land, so in 2004 they purchased a 30-acre farm to replace their “farmette,” including an 1877 farmhouse that needed major remodeling.

With the extra land, they added dairy cows to the mix, at first just for themselves, but when people started asking for milk, they became raw milk licensed a few years later.

While Wendy retired last year to run the farm full-time, Chris still works full-time as a truck driver with a flexible schedule that allows him to help out when needed. The Russells don’t have any employees, so Wendy’s retirement last April was perfectly timed. They received their creamery license last July.

Their permaculture farm now comprises dairy and beef cows, goats, sheep, hogs, chickens, Guinea fowl, donkeys, a creamery and large personal vegetable garden. Dairy accounts for about 50% of the farm’s business, while the meat animals make up the other half. They process each animal at different times throughout the year, which helps with cashflow, and sell retail frozen beef in the winter.

Widdershins raises around 50 Devon cattle. “Devons are the original cattle that were brought to America by the Pilgrims. They are the oldest domestic cattle in the U.S.,” Wendy said, adding that they’re extremely efficient grazers. Because of their smaller size they are not popular with feedlot farms but their size and docility endeared Wendy, who needs to be able to handle them herself.

“They really appeal to me because of their size and sensibility and the bonus is the beef is really, really good,” she said. “Also, over the years we have crossed Devon bulls with Jerseys, and the beef is darn amazing as well.”

Wendy prefers Devon hogs, also known as large black hogs, over the typical Yorkshires for their personality. She said the heritage grazing hog is easy to work. She has 18 hogs this year, including some Yorkshires she needed to purchase since her black hog litter was small while demand was high. She is hoping the extra milk and whey the Yorkshires eat will help them marble up similarly to the black hogs.

They also raise Katahdin sheep, a meat breed that has hair instead of wool and are very parasite resistant. The breed was developed less than 20 miles from the farm in the 1950s. One of Wendy’s first sheep was a daughter of the original stock from that farm. She said they’re hoping to downsize the herd this year partially due to poor hay yield since they supply all their own.

Moxie the donkey guards the herd. Wendy noted other than keeping their 130 broiler chickens under tree cover to avoid hawks, they don’t have many issues with predators. Their animals enjoy free-range grazing, but every couple of years they get a moose that will clobber through fencing.

They practice rotational grazing with all of the animals on their own pastures and another 250 neighboring acres, which keeps Wendy active, moving portable fencing daily.

“A lot of our land has kind of gone fallow, so we’re trying to recover it with restorative grazing,” she said. She believes it’s healthier for the animals if they are not confined, noting that it is significantly more work for her though.

They care for almost all their animals “from birth to the truck that takes them to processing,” she said. Babies stay with their mothers, which means less work for Russell, since she doesn’t have to bottle feed and only milks once a day.

“They’re much better animals if they are mother-reared,” she said. “It does mean that we don’t get as much milk, but it’s not just about making product. It’s about everyone being happy and less stressed, both the animals and us.”

Milk sales, from 12 Jerseys, are the farm’s steadiest, selling to about 30 families routinely. Since COVID-19 they’ve almost doubled sales, adding a couple more dairy cows to keep up, which came from a larger dairy farm that had to cut back due to the pandemic.

Wendy added cheese only last year, building a small 14-by-14-foot cheese room off the current bottling room for around $4,000. “I did what I normally do: start at a small scale and go from there,” she said. “I always want to be able to walk away from something if it doesn’t work out.”

So far it’s working out. She spends four to five days a week making raw mozzarella cheese (plain, smoked and marinated), butter and yogurt (plain and vanilla), which she makes three times a week. From the goat’s milk, which comes from a mixed herd of 14 Kinder, Mini-Nubian, Alpine and Mini-Alpine, she produces feta and flavored chevre. She recently added chevre chocolate truffles in flavors like cinnamon and espresso to help her products stand out.

Another of the farm’s philosophies is to only sell locally, mostly through the self-serve farm store and a few local stores selling her milk and cheese. This year they started selling to a local farm restaurant with hopes that will lead to regular sales.

For the past 12 years they have given demonstrations and talks on raising livestock at the Common Ground Country Fair. They also do occasional workshops, like a recent one on rotational grazing, with the Piscataquis Soil & Water Conversation District, a custom-grazing partner.

Wendy, who wasn’t allowed to have pets growing up, credits her passion for farming to 4-H. “4-H was the best thing that ever happened to me,” she said. “I can’t say enough good about it. It’s probably why I do what I do now.”